Are you in need of a little positive energy to help you get through the difficult times of your divorce? Debbie learns how to tap into the spiritual side of divorce by chatting with the jack of all trades, comedy guru/doctor Jeffrey Gurian. Discover insight into the healing process that’s invaluable to anyone who knows that divorce inevitably has its ups and downs, and at times we all could use the gift of perspective.

Jeffrey with Deepak Chopra at the Hammerstein Ballroom in New York

When Jeffrey was just 7 or 8 years old, he was given the gift of being able to take away pain with his hands, often known as “Healing Thru Touch.” Of course, at that tender age, he did not realize what he was actually doing, but he knew he could take away pain from himself and from his sister.

Only in later years did he realize that what he called “Jeffrey’s Famous Stomach Operation” was a form of psychic surgery. He was even more surprised to find out that what he was doing when he “threw away the bad stuff,” and replaced it with “good stuff,” was actually being done by modern day healers.

The first time Jeffrey saw Ilana Rubenfeld, pass her hands over a subject’s body, and then move her hands in a throwing motion, he had to ask her whether she was “throwing away the bad stuff.” She laughed in acknowledgement, and asked how he knew. He explained that he had been doing that intuitively since he was a child. It just made sense to him. 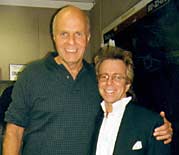 Much of the healing that Jeffrey does is intuitive, and comes through the transfer of positive energy. He is a channel for Universal Life Force, that comes from a Higher Power, and is then transferred from the heart chakra, which is where all true Healing comes from.

Only in recent years, through the study of spirituality, and esoteric wisdom , did Jeffrey realize that a gift like that, when given so young, is usually a carryover from a past life. Jeffrey’s been told that it goes back to ancient Egypt, and even before, to Atlantis, which is a very comforting thought to him, because he’s always felt tied in some way to ancient Egypt. As a matter of fact, he recently wrote a pilot for a new series of love stories for a producer at PBS, and the story had an ancient Egyptian theme.

Jeffrey is the founder of The Happiness Center Institute™ for the treatment of stress related physical and emotional illness, and related Depression, more often than not related to a TMJ (Tempero-Mandibular Joint Dysfunction). It is predicated on his theory that everyone deserves to be Happy, but we can’t achieve that goal while living in pain.

Jeffrey and Marianne Williamson on The Joey Reynolds Show- WOR Radio, 710 AM, – where she kicked off the book tour, for her newest book “Everyday Grace.”

He uses a technique he created called “STAR” Therapy, which is an acronym that stands for Spiritual, Transformational, Affirmative, Resonance Therapy. It is a very gentle energy-based system of Healing Thru Touch which combines the modalities of Shiatsu, Reiki, Therapeutic Touch, Applied Kinesiology, Chakra Balancing, and Intuitive Healing.

The Healing Energy is delivered within the context of a Guided Meditation using special Healing music that is absorbed by the Chakras, while delivering a message of Spiritual Wisdom, to help re-program the sub-conscious mind. The music is often by Steven Halpern, an amazing composer from California, whose music seems to be absorbed directly by the chakras. All these factors together help to create an environment of total Healing.

He did this work while working as a Clinical Professor at NYU School of Dentistry in the Oral Medicine/Oro-Facial Pain Department and was asked to lecture to the faculty on his alternative approach to treating TMJ pain and the headaches and other physical symptoms that often accompany that syndrome.

At the request of Dr. Michael Gelb, the head of the TMJ Department, he also lectured to Dr. Gelb’s post-graduate students on his unique techniques.

And twenty years ago he presented his work to the Association for Spirituality and Psychotherapy, a division of the National Institute of the Psychotherapies, founded by Dr. Henry Grayson, and has been on the Board ever since.

Jeffrey firmly believes that everyone has the capacity to heal other people. “On a very simple level,” he explains, “we’ve all experienced what it feels like to be upset, and have someone you trust and care about give you a hug, and you feel better afterwards, because you’ve allowed them to transfer positive, healing energy to you, and you were open to receiving it.”

As he explains it, “It’s because our Western society doesn’t really understand the power of touch, that we’re not more comfortable with the transfer of positive energy from one person to another.”

Jeffrey usually likes to have people he’s teaching, or working with, rub the palms of their hands together briskly, and then hold them facing each other about 3 or 4 inches apart, and slowly move them closer, and farther away, so that they can experience the feel of their own electrical energy. “It’s important for people to get in touch with the power that’s within themselves.”

Part of the process is having people experience all five of their senses to overload, and all at the same time. “I want to leave people with a wonderful sense of happiness and a very deep-seated sense of well-being. People should be able to tell from your touch that you care whether they feel better or not, and that it’s important to you that they do.”

He goes on to say, “I always start out by asking people if they can feel warmth from my hands. My hands are always warm because I stay in touch with my heart, which keeps my hands warm and ready to heal.”

“If people can feel the warmth, then I know that they’re open to the experience, and are not blocking the energy. I encourage them to speak during the process and to answer questions I put to them, mostly whether certain things feel good to them or not.”

I call it “Verbalization.” Most people have heard the concept of writing down your goals to make them real, and so that you can manifest them in your life.

Many people. especially those suffering from Depression, or those living with chronic pain tend to have a very negative world-view. They interpret everything in a negative way, and they are not used to feeling anything good. They need to be re-trained to let go of the pain and allow themselves to feel good again.

Very often they tend to block themselves from feeling good, sometimes because subconsciously they don’t feel they deserve it, or because they’ve been living with pain for so many years, they’re forgotten what it feels like to feel good.

They often feel guilty receiving, or acknowledging pleasure, and they have to be encouraged to allow themselves to feel good, and to know that they deserve it.

He explains about the process, “I create a repeatable environment of Healing, and it all has to be just right. The lighting, the music, the incense, the scent of the lotion, the taste of a something delicious, and the gift of allowing yourself to experience the power of touch–each awakening a different sense, and all adding to the power of the experience.

And it is very powerful. The first session is often 3-4 hours long, and other follow-up sessions go as long as they need to, as opposed to regular therapy which is usually only 45 minutes.

“You can’t really time a breakthrough, and enough time is needed to allow that to happen. The usual 45 minutes just won’t do.” One satisfied patient, who happened to be a psychologist herself, flew to New York for an entire week of Healing and “STAR” Therapy, referring to it as “accelerated therapy” stating that she got more accomplished in one week-end than she did in a year of regular therapy.

You can make an appointment to see Dr. Gurian in person by writing to him first at [email protected] with your name, where you live, your contact information and some history about your condition, and he will get back to you.

1. Dr. Gurian presented a workshop at The Fifth Annual Conference on Spirituality, Psychotherapy, and Healing, at Fordham University, Lincoln Center, 60th Street & 9th Avenue in New York City. Entitled “The Spiritual Approach To Treating TMJ Dysfunction and Depression”,in which he discussed his Healing technique of “talk and touch” called “STAR” Therapy, an acronym for Spiritual, Transformational, Affirmative, Resonance Therapy.” Sponsored by Omega Institute, The Nat’l. Institute for the Psychotherapies, Fordham Univ. Psychology Assoc., and The Assoc. for Transpersonal Psychology. www.psychospiritualtherapy.org

2. Dr. Gurian presented at the SouthEast Energy Psychology Conference in Atlanta, Georgia at the Simpsonwood Conference Center, on treating “TMJ Dysfunction and Depression” using his technique of “STAR” Therapy. Sponsored by ACEP, The Assoc. For Comprehensive Energy Psychology.

3. Dr. Gurian presented a workshop entitled “ Healing Your Heart, By Changing Your Mind Using “STAR” Therapy, A Spiritual Approach to Stress-Related Illness and Depression”, at the Fifth Annual Energy Psychology Conference in Toronto. The conference was entitled “Breakthroughs in Energy Psychology” and was sponsored by ACEP, (Assoc. for Comprehensive Energy Psychology). http://www.meridianpsych.com/epc.htm

4. Dr. Gurian gave a private workshop in Toronto on his innovative “STAR” Therapy, a system of “talk and touch”. It was held at The Michener Insitute for Applied Health Sciences, in Toronto, Ontario. Canadian Health Management Group at [email protected]

5.  Dr Gurian addressed the psychotherapists and directors of The Groden Center, in Providence, Rhode Island, with a 2 hour talk entitled “TMJ and the Physical Symptoms of Depression – Healing On A Heart Level.” For more information visit www.grodencenter.org

6.  Dr. Gurian was the guest speaker at CRS, The Center for Remembering and Sharing, at 123 4th Avenue in Manhattan. He discussed “Healing On A Heart Level”, along with his technique of Spiritual Healing Thru Touch, using “STAR” Therapy™, a system of “talk and touch” that he developed to treat the physical symptoms of stress-related illness and Depression.

7.  As part of the one year curriculum offered by The Assoc. for Spirituality and Psychotherapy, Dr. Gurian taught his course on “Healing On A Heart Level” utilizing STAR Therapy, at the offices of the National Institute of the Psychotherapies at 250 West 57th Street, in Manhattan. Limited to professionals in the field of psychotherapy. For more info go to www.psychospiritualtherapy.org

And again, Dr. Gurian also sees patients privately for treatment, and can be reached at by writing to him at [email protected] for an appointment.