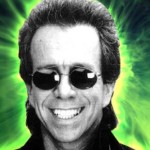 People often ask Jeffrey Gurian why he thinks of such strange things. His answer is usually that he can’t help it. “I try and think of normal, regular things, but I just can’t seem to do it. Even when I’m just relaxing, I’m plagued with recurrent visions of strange men dancing with unusual objects. As a child I wouldn’t allow myself to go to sleep until I thought of a name like Abner Yibibbibitz, that would make me laugh. I was a very strange child.”

Out of those unusual thoughts came The “Men Who” Series, a series of short films that Jeffrey wrote and directed. They were made originally for the Toyota Comedy Festival.

Some of the film titles are “ Men Who Take A Pitchfork To The Movies”, “Men Who Enjoy Latin Dancing With Tools”, and “Men Who Dance In Traffic With The Sunday Edition of The New York Times.” Award winning actor Peter Dinklage appeared in “Men Who Dance Where They’re Not Supposed To”, about two men who get arrested for dancing in a “No Dancing” zone. (see clip below)

Gurian claims not to have slept at all since he was a child, and spends his time reminiscing. He reminisces about people he’s never met, places he’s never gone, and things he’s never done. “Sometimes, I just sit around and think about all of the parking spots I’ve ever found, and who’s parked in them now.”

“Then I think about all the wrong numbers I’ve ever received, and what those people are doing now. Then I torture myself with the thought that maybe I should have kept their numbers and stayed in touch!” Those are the kinds of thoughts that plague Gurian on a day to day basis.

The legendary Weekly World News made Gurian a writer/reporter where he cranked out hard to find stories like “Tap Dancing For The Criminally Insane”, “Man Paints Replica of the Cistine Chapel With His Beard”, and “Comedian Kills Half His Elderly Audience With Great Joke.” The joke was so funny, they couldn’t even take a chance and print it for fear of what it might do to the people at home.

Gurian’s editor told him that his stories were strange even for Weekly World News, so they went on to give him his very own column called “Gurian’s World of the Bizarre”, where he wrote and reported on stories like “Rare Virus Sweeps Japan, Victims Too Weak To Bow”, “Man Impaled On Spike Still Shows Up For Work On Time,” plus an in-depth story on the discovery of the Busiclander, the ancient world’s first two man instrument.

On a personal level, Gurian is a conceptual person who lives what he writes. He is known for always carrying an assortment of spoons, one of them usually in the handkerchief pocket of his sports jacket. That’s the one he often holds in his eye like a monacle, which is a technique that he once taught Surrealist legend Salvador Dali to do, during an evening that they spent together.

Some of the other spoons he carries are often bent or broken, as he claims to have a “spoon repair service”, and that he’s so busy he had to bring some of his work home with him.

He also has cards that he carries that identify him as either Abe or Zeke Hernstabuhl. He claims to be both, and that he’s his own brother! He even has a photo with his arm around himself. The business cards identify Abe and Zeke as the “Thank-You Note Kings”. He will ask you for your address, and tell you that “in the morning you will receive a thank you note!”

In his home, he has two spoon plants, and claims he has just the right exposure for growing spoons. He has a spider that looks like W.C. Fields, and he makes you sign an egg on entering his abode. His apartment is usually filled with brightly colored balloons, “ because balloons signify Happiness. You never see balloons at a funeral,” says Gurian. And Gurian is all about Happiness.

He spends what spare time he has working on inventions to make the world a better place, like the flashlight that works during the day. “ Now people can see where they’re going during the day too”, he explains.

Then he invented the 24 hour stapler for people who enjoy stapling things in the middle of the night. “ I got tired of having to stop stapling things at midnight when most staplers stop working”, he explained. “ Now you can wake up at 3 in the morning, … which is late… and still be able to staple something if you’re in a stapling mood.”

And his latest invention is the battery-operated beard, for men who enjoy dating hot models, and going to parties where it’s important to have a Biblical length beard that can swing like a pendulum for hours.

“In the past”, he explains, “ you’d show up at the party and have to look for an electrical outlet to plug in your beard, in order to make sure it kept swinging all night. Unless you brought a long extension cord, you had to stay close to the outlet for the entire evening, which made it inconvenient if you saw a girl you wanted to impress across the room. Plus all the extension cords would criss-cross on the dance floor making it very hard to dance without being tripped.”

“Now with the battery operated beard”, he continued, “ you can move freely around the room, and basically go anywhere you like, and your beard will still swing for hours.”

Gurian also formerly invented the reversible beard, for men who want to pack light when going on vacation, but know they still want a change of beard when they get where they’re going.

Jeffrey’s animated versions of his GNN stories like “Man Robs Bank With His Chin”, “College Prof. Fired For Casually Removing His Spine”, “George Washington Wore Wooden Pants”, and “Man With Infant’s Head Sues for Discrimination” were featured at the Cannes Film Festival in 2009, as part of the Short Film Corner.”