Welcome to Gurian News Network. Your main source for the most unusual news on the planet readily available for your listeners pleasure. GNN stories are available to be syndicated on radio stations throughout the country and are now also available in animation as you’ll see right here!!

A compilation of GNN stories entitled “All The News That’s Fit To Dance To” including “George Washington Wore Wooden Pants”, “Man With Infant’s Head Sues For Discrimination”, “Man Robs Bank With His Chin” and “College Professor Fired For Casually Removing His Spine” was honored by being included in the Cannes Film Festival 2009 Short Film Corner. It was also requested to be shown at the Young Filmmakers Festival of Granada, Spain.

Gurian’s News Network finds the strangest and most unique stories on the planet and shares them with the public through Gurian’s many radio appearances, which have included the Ron and Fez Show on Sirius XM, Raw Dog 99, where Jeffrey is a regular,  The Joey Reynolds Show on WOR-AM, The Radio Chick on 92.3 K-Rock, Jim Breuer on Sirius Satellite Radio, Court TV Radio with Vinnie Politan, Comedy By Request and Getting Late with Pete Dominick on Sirius Radio, The Wiseguy Show with Vincent Pastore, National Lampoon Radio with Kent Emmons, The Olga and Laurie Show on CJAD Radio out of Montreal, and many more, with several more scheduled.

GNN stories are also available to be syndicated on radio stations throughout the country. 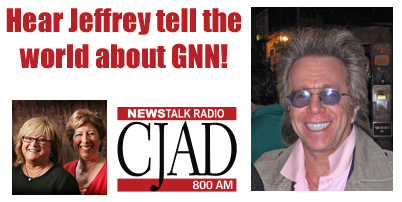