If you grew up idolizing the stand-up comedy of Woody Allen, … that’s assuming you’re old enough to remember when he performed stand-up on the Ed Sullivan show, …you can understand the frustration of knowing you’ll never see him perform stand-up again.

As a performer myself, I hate to compare one to another, but in my estimation the closest you can come to the kind of humor, and level of sophistication of humor that Woody did, is the great Richard Lewis, the Master of Angst!
(He’s also the creator of the expression ” the __________ from hell”, like ” the date from hell”, ” the vacation from Hell” This man put that into the lexicon! 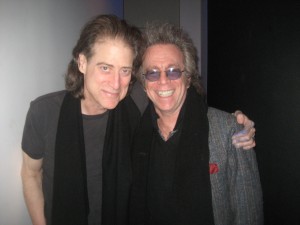 I’ve known Richard for a long time and was very excited to hear that he will be headlining Carolines on Broadway from March 24th thru March 27th. It’s a rare occurrence and one not to be missed! Especially if you’ve been enjoying him on HBO’s hit show ” Curb Your Enthusiasm” for the past 8 seasons.

I have a couple of Richard Lewis stories to share.

Back around 1996 or so, Richard was starring in a film called “Drunks” with Faye Dunaway, Calista Flockhart, Sam Rockwell, Parker Posey, Dianne Wiest, Amanda Plummer and other names that were not as big then as they are today. I was always determined to write for Richard not knowing that he never allowed anyone to write for him. I had gotten my start by actually showing my very early writings to Woody Allen himself, who was starring on Broadway in “Play It Again Sam” at the time,with Tony Roberts of course, and Woody was so kind he invited me back the next night to show him more of my work. 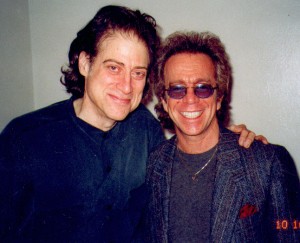 One of the reasons he did that was because I had so little knowledge of what to do, that I went backstage during intermission instead of waiting till the end of the show, and he had to go back onstage. The story of how that all came about, and how I wound up backstage in the first place will be the subject of another blog, but suffice it to say that years later when I became friendly with both Jack Rollins and the late Charlie Joffe, both of whom managed Woody’s career for many years, they were both pleasantly surprised that Woody was so nice to me. Woody actually read through my ideas, and told me I had a very visual sense of humor and should think about making films of my work.

Jack said, “Woody must have really seen something in you to have done that.” Whatever Woody saw that night it took me many years to turn those early ideas I showed him into The “Men Who” Series a series of films about men who do very unusual things, like ” Men Who Take A Pitchfork To The Movies”, “Men Who Enjoy Latin Dancing With Tools”, and “Men Who Take A Fish To Hot Clubs.” You can actually see those films on my You Tube page at http://www.youtube.com/guriannewsnetwork

Anyway, I showed up at Drunks with jokes in hand expecting to give them to Richard in hopes he would use them. I wrote it as part of what I was calling his ” Born To Be Nervous” tour, which I wanted to suggest to Richard. Aside from the “Born To Be Nervous” Tour, I suggested a couple of the following lines-

My family are firm believers in the power of negative thinking. They feel you can ruin anything if you really put your mind to it.

Low self esteem goes back in my family to the beginning of time. I actually had an uncle who was the first man to walk erect. But he couldn’t hold it. He’d take a few steps and just slump over.

I was such a shy kid, I never even had the courage to go Trick or Treating. I tried doing it over the phone.

My apartment is a problem too. I just got my new lease, turns out I’m renting it by the hour.

I don’t like to burden my shrink with my problems. He’s too sensitive. One time I told him I was leaving him, he threatened to kill himself.

I think I would have made more progress with him, but when he told me to lay back on his couch, I couldn’t do it. My mother always taught me not to put my feet up on someone else’s furniture.

And I knew that if I did it, she’d find out and feel that somehow, it would be a reflection on her.

My shrink was treating me for feelings of loneliness. At one point I was so lonely I tried to develop a split personality, just for the company.

So anyway, I felt pretty good about the jokes and ran to the theatre with them in an envelope. The problem was I had planned to get there early to try and see Richard, but I was so nervous I made myself late, and when I got there, there was already a long line of people waiting to get in.

In a panic, I by-passed the line and ran down a staircase not knowing where it would take me, and who’s coming up the staircase right towards me but Richard Lewis himself. Those kinds of things happen to me on kind of a regular basis, although I have no idea why, or what to do in those circumstances.

He looked at me and said, ” Hey, what are YOU doing here?” I’m like, ” I came to see you”, and I was so shocked to actually run into him that I almost forgot to give him the envelope with the jokes in it. Fortunately I remembered and gave it to him, even though he was on his way into the theatre to do his presentation. Most people don’t like to be carrying things with them, but I didn’t know what else to do.

After the screening he took off pretty quickly, but by the time I got home there was already a message on my phone from Richard. I think it was the nicest decline of material I ever received. He said I was talented and hilarious, and you can listen to it right here because it meant so much to me I saved it all these years. He was so kind that he called me right away. That is a very, very rare thing for anyone to do, especially a star of his calibre. ( I think his caliber is 9 millimeter, or it could be .380. They’re very close in size! LOL)

I always wonder if I didn’t put the (LOL) would people know it’s a joke? I guess if they didn’t, it wasn’t much of a joke! (LOL)

I remember seeing Richard in Westbury, and going to see him backstage afterwards when he told me that he stopped taking his notes out onstage with him at that very performance.

I also went to see him at Joe’s Pub a few years back, and again at Comix in 2008, and he did an incredible performance, in a kind of stream-of-consciousness style that is inimitable, and what he’s known for. I was amazed that anyone could go that long, with what looked like an unprepared act, in the sense that no one could memorize such a thing, with one thought leading him to another, and I wrote to him at the time –

“No one goes that long at that pace but you, with consistently funny, material that is not an act! Despite the fact that you rarely let yourself finish a sentence, it’s hysterical. You have the “un-act!” 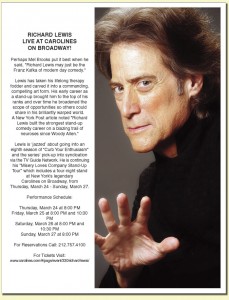 All the info you need to see Richard Lewis at Carolines!

I also hope to see him at The Friars Club for lunch, cause when I asked him if I could come see him backstage, I got this e-mail :

I have six or seven tv n radio shows
Prep
Jet lagged
Five shows
Never backstage more than two minutes be it God, Dylan or you

PERFECT!!! He lumped me in with G-d and Dylan! Come see Richard at Carolines!
S