Al Lubel, The James Bond of Comedy, at Broadway Comedy

Al Lubel likes his name. He says it a lot. He says it so much in fact that it becomes hysterical. If you don’t believe me ask anyone in the audience at any of his shows. I see a lot of comedy but it’s really rare to hear such sustained laughter throughout one set. 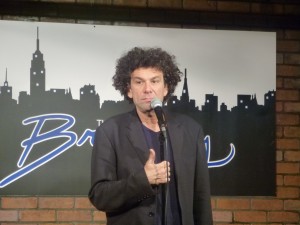 Even the funniest comics have ups and downs, but Al Lubel really brings it! And Al was just part of a fantastic show I saw at Broadway Comedy.

Chris Murphy who has hair that any rock star in a hair band would envy was the MC. Chris said he gets yelled at a lot in the street because of his hair. People make remarks. Once someone yelled out ” Faggot”, and he was really ticked off, until he realized that of all the men in the crowd he was the only one who turned around! 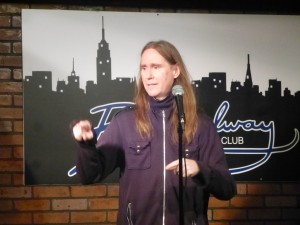 He’s also a redhead and said he hates it. He said if he married another redhead his kid would come out clear!

And he talked about the Irish being alcoholics. He said his father got a DUI, … during his driving test! (Hysterical!) And it was on the written part! (That’s what’s known as “the topper!”)

Not only is Chris funny, but he’s also a gentleman. He gave me a shout-out from the stage about my new book with Chris Rock called ” Make ‘Em Laugh”! Very cool!

Daniel Tirado talked about HIS father too. His father drank too but refused to go to Alcoholics Anonymous. He said that everyone knows he drinks, so he can’t be anonymous!

He also claimed to be a great cuddler, but said it’s not the kind of thing you can brag to your boys about! “Man, I cuddled the shit out of that girl!” 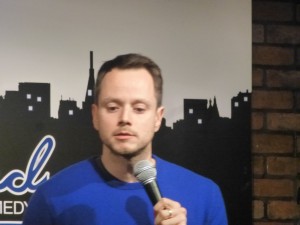 He also talked about picking up chicks in third world countries, and how the lines would differ from what you might use at home, ” Girl, I heard the Red Cross is in town this weekend. Maybe we could get together and get vaccinated!” Very funny stuff!

Ross Bennett is always a crowd pleaser, from the time he opens till he closes by asking the audience if they mind if he does a line from an old act, and with their permission says, ” How about that Watergate thing?” He always leaves the stage to huge applause. 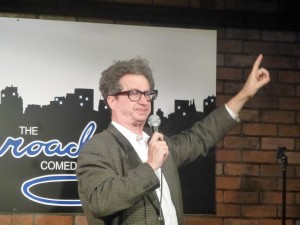 Ross Bennett looking like he’s trying to hail a cab from the stage at Broadway Comedy Club!

Chips Cooney comes out as a master magician and purposely messes up the tricks but it’s hysterical! 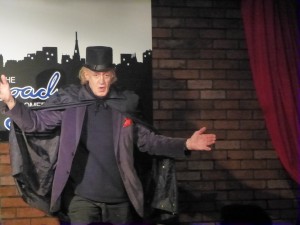 But Al Lubel is a story unto himself. Really strange thoughts, really clever, really funny. He’s obsessed with saying AlLubel, as if it’s one name like Cher, or Rihanna. The way James Bond introduces himself in his inimitable way by saying, “Bond. James Bond!” Al would say, “AlLubel! AlLubel”! It may not play well on paper, but onstage it’s a killer.

He was walking down the street thinking, ” Nothing ever dawns on me!” I love that. It reminds me of the fact that I enjoy “mentioning” things to people. I do it as a hobby. 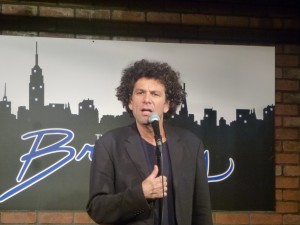 Al Lubel wondering why things never dawn on him, at Broadway Comedy Club!

More Al Lubellism’s – He said he tried to raise his self-esteem but then he realized he wasn’t worth it.

After saying his name many times in a row, he said to the audience, ” The more I say my name, the more you look at me and say, ” Who is this guy?” I’m Al Lubel.

All he does all day is sleep and rest. On his tombstone they’ll write, ” May he continue to rest in Peace!”

He even thought about suicide, and wondered how people would react if he jumped off a building, and just before he landed he shot himself in the head. People on the ground would think, ” He couldn’t wait another second?”

I could listen to AlLubel all night. And the best part is that he works clean! A real rarity, even in my own act!