Once a month, Gotham Comedy Club is the home of Anthony Anderson’s fabulous Mixtape show. He and his partner Royale Watkins put on such a fantastic show, mixing comedy and hip-hop, with a cool DJ, usually DJ Diamond, a free-style rap battle which never ceases to amaze me, how these guys can “spit” beats right on the spot, and then a musical guest. This month it was Full Force from Staten Island. 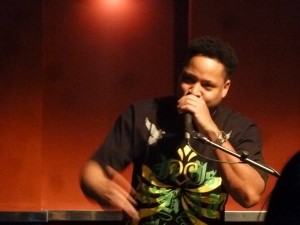 DJ Diamond on the “ones-and twos” for Anthony Anderson’s Mixtape Show at Gotham!

Some month’s Anthony’s not able to fly in but the show still rocks. Last night’s was no exception. Bow Legged Lou, and his brother Paul Anthony opened the show and introduced Royale to the packed house. Royale is a great MC, funny in his own right, and keeps things moving along well. He always makes sure to give his wife plenty of shout-outs during the show. He must be making up for a lot of past mistakes, LOL, which he alludes to constantly! I think Royale had at one time been a very bad boy! (LOLOL) 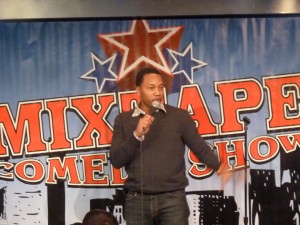 Royale Watkins onstage at Gotham warming up the crowd for his fabulous Mixtape Show!

Marshall Brandon was the first comic up and he was a real crowd pleaser. Then Tom Van Horne, or Thomas Edward Van Horne IV, ( IV means “the fourth, not that he’s on an IV, you dopes!!! LOL ) took the stage, and hit a home run. I liked when he described the difference between being single and being married. “When you’re single, you have to go out and try and convince a drunk woman who doesn’t know you to have sex with you. When you’re married, you have to try and convince a sober woman, who DOES know you, to have sex with you!” Very clever, … and very true!!! 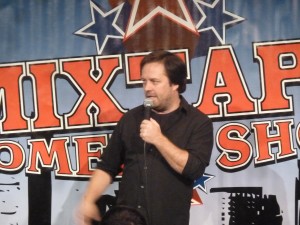 Then Vanessa Hollingshead got up, and she always does well. I love when she imitates a drunk French woman, who doesn’t know she’s drunk. The audience loved it too! People love impressions. Too bad I can’t do ANY! Maybe I can do two Greek men meeting in the street, mispronouncing words as numbers ” How are you today my friend?” Five thank you, and how are you? Not too good. I feel a little six! Really you don’t look six. You look just five to me!” If you try that in a Greek accent it comes out very funny!

Mike Yard was the closing comic and he totally killed it. He told how Black people with no insurance go to the clinic and sit till someone with insurance comes in with the same symptoms. Then when they come out from seeing the doctor, they say, ” Well, what’s wrong with us? What medication did he give us?” 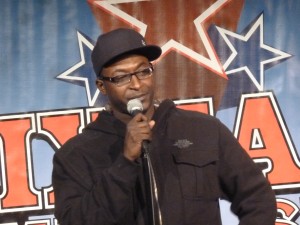 Mike Yard “doin’ what he do”, at Gotham, for Anthony Anderson’s Mixtape Show!

He talked about how kids these days can call in a report on their parents on 911 if they feel they’re being mistreated. In his day, with a rotary phone you could never do that. By the time the nine came around, his mother already caught it and hung up!

But when he did an impression of the first Latino President, with a heavy Latino accent, the crowd laughed so hard, they were gasping for air.

The rap battle was astonishing as always. It’s like magic. You just can’t figure out how they do it!

Next show is Sunday January 15th! Don’t miss it!