Aries Spears’ website identifies him as “The Funniest Muther-F#*ker On The Planet” and I don’t think I’d argue with that. Most people tend to hype themselves, but in Aries’ case it’s true. I can see why he was a star on Mad TV. His characters, and ability to do dialects, are amazing. And Gotham Comedy Club was packed to capacity, which not all comics can do.

To give you an idea of how crowded it was, they had to put two strangers at my table, cause they were totally out of space! And I was cool with that! They happened to be nice people! 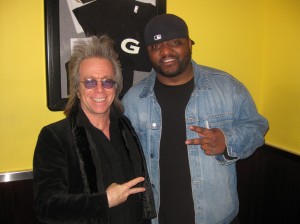 Jimmy Failla was the MC and opened with a strong set. Opening a show the right way is so important. It gets the crowd in the mood to laugh. Jimmy just has that way about him, and coupled with strong material makes for a good host. 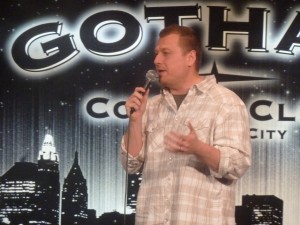 Jimmy Failla onstage at Gotham getting the audience in a good mood!

I always knew that hosting was difficult, but when I started doing it myself at The Comic Strip, I REALLY appreciated how much harder it is than just doing a regular spot. A few nights later, Jimmy and I got to perform together at Gotham on Alyse Kenny’s comedy show for the charity, “The Cure Is Now”! Alyse produces a once a month show at Gotham in the Vintage Lounge, each month benefitting a different charity.

Veronica Mosey took the stage next, … and refused to tell us where she put it! (LOL) That’s so silly, but it reminds me of the line, ” I’m a hard act to follow cause when I leave the stage, I take the mic with me!” 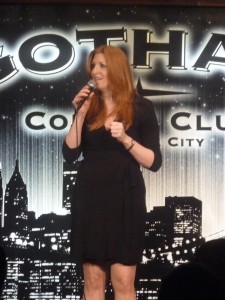 Veronica is always funny, and in a male dominated world, manages to hold her own! She recently got married and was also just profiled on National Lampoon’s Interview Show, the week after I was. You can see her interview at www.nationallampoon.com

Areis did at least an hour seamlessly. Never at a loss for what to do next. He jokes about Blacks and Whites equally, and does an incredible imitation of a “White” voice! He says he uses that voice when he’s talking to a white girl, so that he feels white. As he tells that story he plays the classic Rick Springfield rock song in the background, ” Jessie’s Girl”.

He also does a variety of great ” Black” voices which answers the question that many white people have, whether Black people know that they talk a certain way! Not only do they know, but they can modify it and even “Black it up” when they feel they need to! (LOLOL)

Aries says, you know you’re a big star when you can sell out Africa!

He says that Maury Povich’s show is “Black ignorance at it’s finest!”, which may be the best summation I ever heard.

He jokes about Africans being so black, that he told one African guy, ” If you stood against a building you’d like like the entryway to an alley!”

He likes when Black people go out to a show and when the bill comes, one person inevitably says, ” Who ordered gratuity???” 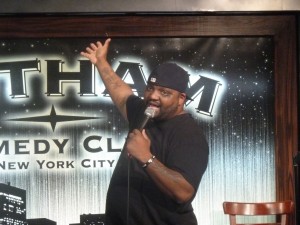 The multi-talented Aries Spears making a point during his sold-out show at Gotham Comedy Club!

He wants to be a film star but he thinks he needs to lose some weight first. He says, “You know you have to lose weight when you have to catch your breath from breathing!”

He also does great Indian and English accents, and fantastic impressions of Arnold Schwartzeneggar, and Denzel Washington! (If I had just written “Denzel”, would you have known who I meant? LOL)

And then as a finale he does a rap song while imitating all the rappers like Snoop, DMX, Method Man, Biggie and Jay-Z. The man is an entertainment phenomenon, and if you get a chance to see him go for it!