At any given night you will find an amazing line-up of comedians at Broadway Comedy Club, on West 53rd Street, right in the heart of the Times Square area. On a recent Tuesday night when I stopped by, the place was packed as it usually is, and Dan Siegel was MC’ing.

Some of the top performers were Leah Bonnema, who recently performed at the Glascow Comedy Festival, where she was in the America Stands Up Showcase, the Huffington Post voted her one of their 53 favorite comedians to watch, … and I really meant to ask her how they came up with that number, because most news organizations stop at their favorite 51 comics!, (I on the other hand was listed as one of the top 10 comics to keep under surveillance!), and College Candy listed her as one of their top ten female comics in the country! So that’s all good! 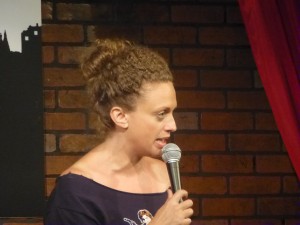 Ricky Velez went up and killed it as usual. I just find it hard to believe he’s only 23. He comes across as much more mature than that! Not by his material, by his appearance! It’s a great time to start performing when you’re in your 20’s, but then you have to be funny for 60 or 70 years. That’s a long time. I only wanted to have to be funny for 20-25 years tops. That’s why I started so late! 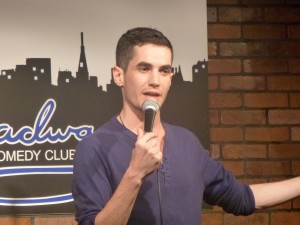 And I was glad to see Ross Bennett on the show because he is always a crowd pleaser! Ross talks about a guy who got killed in a skydiving accident, because his parachute failed to open, and at the funeral they said that at least he died doing what he loved. Ross differs with that. Ross said the guy probably was doing what he loved up until about a minute before he died, unless what he loved was seeing small things become larger very quickly! 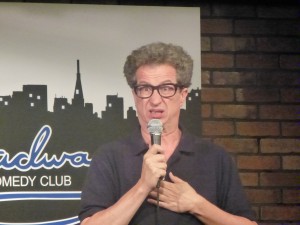 At the end of his act, he asked the audience if they minded if he did an older joke because it was one of his favorites, and when they agreed he said, ” How about that Watergate thing?”

Every night at Broadway is a great line-up, so be sure to stop by and tell ’em I sent you!