Carlos Mencia is the 17th of 18 children, believe it or not, and was born in Honduras. As an infant he was sent to the US to be raised by an aunt and uncle in the Maravilla Projects in Los Angeles,” (the city of Angels” in Espanol), but went back to Honduras as a young teenager to get away from the gang culture in his neighborhood. When he came back to the US, the school system took notice of how smart he was and automatically put him into the 10th grade, …proving that ” The Mind of Mencia” was not just the name of his hit TV show on Comedy Central from 2005 to 2008! 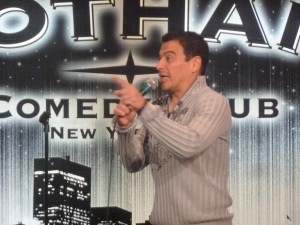 ( I had a choice with that tag! As a comedy writer, I could have said, “the school system took notice of how smart he was and automatically put him into the 10th grade. Unfortunately he was 19 at the time!” and gotten a cheap laugh, but I like Carlos, so I didn’t do that! LOL )

Carlos started performing stand-up at The Laugh Factory and went on to become a regular at The Comedy Store, which is where I first met him. He performed there every night and drew quite a following. There was always a buzz about Mencia. 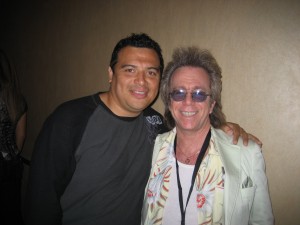 The “fluffy” Carlos Mencia I knew when I first met him out in LA! “Fluffy” being Gabriel Iglesias’ term for slightly overweight! LOL

So when I found out he was headlining Gotham Comedy Club I made sure to attend. But he lost so much weight I almost didn’t recognize him. 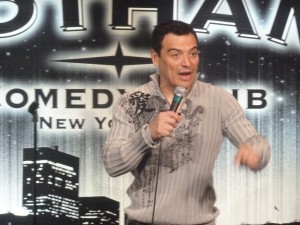 The newly thin, healthier, and funnier than ever Carlos Mencia onstage at Gotham!

To address that, he comes out and right away tells the audience that he doesn’t have AIDS. One day a friend of his made a comment that he was fat! (I understand it was Gabriel Iglesias who said it, which is hysterical, on many levels!) 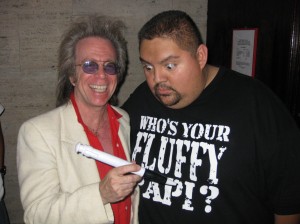 Jeffrey Gurian of Comedy Matters TV and Gabriel Iglesias at a Latino Comedy Festival in LA! Gabriel is shocked by the size of Jeffrey’s big pen! 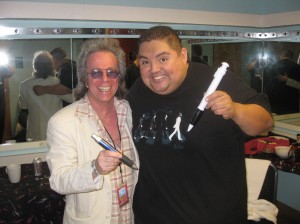 The next time they got together, Gabriel Iglesias got the bigger pen and Jeffrey Gurian of Comedy Matters TV got stuck with the smaller pen!

Carlos couldn’t believe it cause he never thought of himself as being overweight! Then he saw photos of himself, realized he was fat, and decided to do something about it! That’s what is known as “taking back the power!”

The man is half his size! But if he’s half his size, he’s twice as funny, with a wealth of material that most comics could only wish for.

He talks a lot about how great it is to be an American, and makes sharp racial observations like discussing why it’s a common thought that most Black people can’t swim. “Cause we used to chase them away from the pool. So ironically they became fast runners, but they never learned how to swim!” 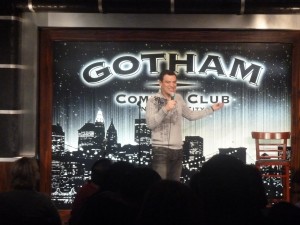 A very thin and very funny Carlos Mencia killing it on stage at Gotham Comedy Club in NYC!

He also does great dialects including African, French, Spanish of course and Japanese.

But the one concept that stood out to me the most was his take on Columbus discovering America, when the Native Americans were already living here. I’m paraphrasing here, but he said something like, “You can’t discover a country if people are already living there!” He envisioned a guy from Mexico jumping the border and when he was stopped by border guards and told he was entering a sovereign country, would plant a flag and say, ” I am discovering this country for my people!” That’s comedic genius!

And that’s why the show was sold out!