It’s been kind of a tradition that the head writer of SNL takes over the Weekend Update desk and now that Seth Meyers left to take over for Jimmy Fallon on Late Night with Seth Meyers, Colin Jost gets to occupy the co-anchor seat next to Cecily Strong, as of tonight, March 1, 2014. 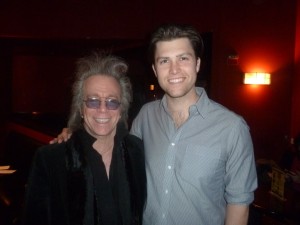 And for that I’m staying home, because Colin is a friend and I feel like I support him better by watching it live rather than taping it!

Like others before him on SNL Colin graduated from Harvard where he was President of The Harvard Lampoon, and joined SNL in 2005.  He worked his way up to head writer in 2012.

I see Colin fairly often performing at The Comic Strip, which is one of his favorite clubs, and he’s really funny and very likeable onstage.  People will love him as the Weekend Update anchor.  His parents came to see him at one of the shows I was at and interesting fact, … his Mom is the Chief Medical Officer for the NYC Fire Department! 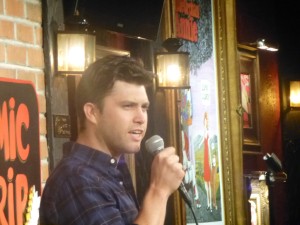 Make sure to tune in and watch!  But first watch this little video I shot with Colin backstage at The Comic Strip!