Comedy In An Alley

If you’ve been to any upscale, fancy Manhattan event chances are you’ve seen Francesco Belcaro. He’s hard to miss. Tall, handsome and stylish with 46 thousand followers on Instagram, and usually surrounded by models, chances are good he had something to do with making the event successful.

As a matter of fact I’ll be attending a black tie affair of his tomorrow night called The Venetian Carnival which will be held at The Top of the Standard. You can see him greeting me at a fashion party he arranged in a cool beautique, where the champagne was flowing freely in the  video below.

A force in marketing, promotion, and real estate you can imagine my surprise when he invited me to a comedy event.

And then I saw that Mehul Patel was involved and I know that he does comedy shows in upscale venues to try and create a party kind of atmosphere where the audience hangs out afterwards to keep the show/party feeling going. There was no question that I would attend. It was a concerted effort between those guys as well as Rick Rosa and Maria Ton.

This show was called Laughter at Alley Cat and was held at a place called “Alley Cat” on a street I didn’t even know existed in New York. Theatre Alley. I had no idea what to expect when I drove down there, but it was a good sign that Waze knew just where to take me. 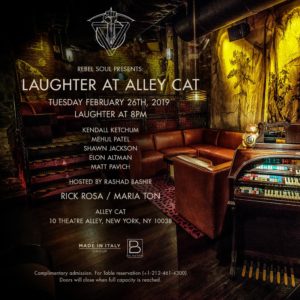 Luckily I was able to find a parking spot where Waze said it was, but when I got out of my car I didn’t  know where to go. I was parked right across from this narrow alley and Waze said I had arrived so I tentatively walked into this alley. Late at night in New York you don’t just walk into any alley, but I didn’t know where else to go. When I first walked in all I saw was this. 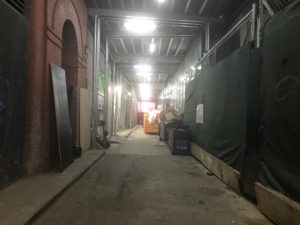 I ventured further and suddenly saw velvet ropes which in New York is always a good sign. 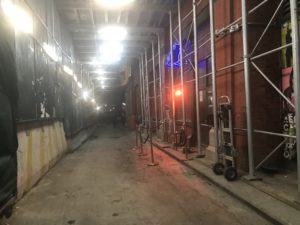 As I got even closer I saw the logo of the Alley Cat and felt relieved that I was in the right place. 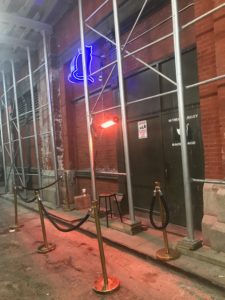 Right away it had a cool vibe. Security guided me downstairs and then upstairs into a showroom that was packed with people already drinking and having a good time. Francesco spotted me and took me to the VIP room where I saw the other comics, host Rashad Bashir who I had just met recently at a show at Alex Carabano’s V-Spot restaurant and comedy club, Kendall Ketchum representing those with two X chromosomes, Shawn Jackson, Elon Altman, the afore-mentioned Mehul Patel, and Matt Pavich. 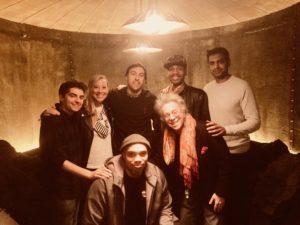 Rashad Bashir was a great host who really got the energy pumping, and one by one all the comics brought their A-game which wasn’t always easy because of the noise from the bar. That’s the only problem with doing comedy from a “hip” venue that is not a traditional comedy club, trying to control the noise from the bar, and from people who may have drank enough to forget their manners and that a show is going on. 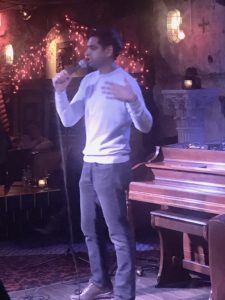 Fortunately the host reprimanded them and most of the comics projected loudly on the mic to overcome the background noise. Matt Pavich had a different approach which I really respected because it’s hard to do. Rather than yell, he took a chance and spoke quietly, and the audience in turn quieted down to hear him. I’ve seen it done before but it takes courage because if it doesn’t work you’re in worse shape than you were in the first place. I gave him props for that after the show because it was a choice he made that worked.

All in all it was a very strong show, and I hope to go back and perform on it myself one month.

That’s all for me. Just remember that Comedy Matters, … and with that I’m OUT!!!

And please go to my Comedy Matters TV You Tube channel to see fun video interviews with all your favorite stars, and follow me on Twitter and IG at @jeffreygurian