I ran into Brian McCarthy from National Lampoon Radio’s Interview Show recently at a party, and he reminded me of when we first met back in the 90’s.

He was kind of new in town, and said he used to see me at many parties and events with spectacular women, and always wondered who I was, but was too nervous to come over and say hello! (LOL)

Then one day he realized we had a mutual friend named Chris Walsch. Chris and I had a comedy sketch troupe that disbanded before we got to do any performances, but we were always hysterical laughing, and I wish I knew what ever happened to him. Brian asked Chris who I was and he told him to the best of his ability! (LOL)

Thankfully the ensuing years have given Brian more courage because the evening I mentioned above, he did come over to say hello, and we had so much fun reminiscing that he invited me to be a guest on his interview show. He and producer Marty Dundics do this really fun show, and I was a guest for about an hour. 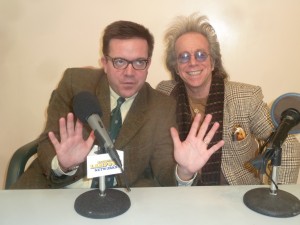 Brian McCarthy, the host of National Lampoon Interview Show, showing that he has nothing in his hands, but still does magic with Jeffrey Gurian of Comedy Matters TV! 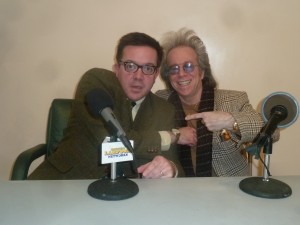 Brian McCarthy, host of National Lampoon Interview Show and Jeffrey Gurian of Comedy Matters TV, pointing each other out to the police, when asked “Who did it???”

You can check it out in the video below! We really had lots of fun!