Sometimes in the middle of a set, if a comic doesn’t think the joke they just told got enough of a response they mention it to the audience. Personally, I try and avoid it although I have been known to say, ” Thank you for obeying the “No Laughing” signs!” 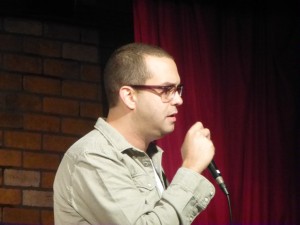 Joe De Rosa who is always funny and proved that long ago, was doing a bit in the main room of Broadway Comedy the other night about nurses, and about how some of them are not that attentive when you’re in the hospital. He was using his Mom’s recent hospital stay as a reference, and he happened to comment to the audience something along the lines of he felt he was losing them over this nursing material, when one woman in the audience became quite vocal in her response, that she wasn’t feeling the nurse material and said something to the effect, “I’m feeling your pain but you’re not rocking it right now!” Which was a strange remark on many levels.

Mostly I wondered where she had learned the term “rocking it”, and I pictured her just waiting for any opportunity to use it. Here was her chance so she yelled it out right in the middle of Joe’s set. Granted he basically asked the audience for their opinion of the nurse material, but not all questions have to be answered. You take a chance when you do that. People mixed with alcohol, can lead to a noisy result, which is what happened here.

Because Joe has so much stage experience he chose to engage her, and she kept insisting that she was a “friend”, and “fan” of Joe’s, hence the “Friendly Heckler” title, and she said she liked him as a comic but felt the need to stand up for nurses. All this while the show was going on, … or not going on!

Joe handled it well, but a lesser comic wouldn’t have been able to. He also said ” The President did badly in the debate because he ran out of lies. Politicians promise you things you like. You like water slides? If I’m elected, everyone will have a water slide!” It can’t be done. They know it but they promise it to you anyway!

Joe’s got a new book out called Cheat: A Man’s Guide to Infidelity, from Simon and Schuster, that he wrote with Bill Burr, and Robert Kelly, and the book is a hit! You can get it on Amazon!

Leah Bonnema was the host and she’s great at that. 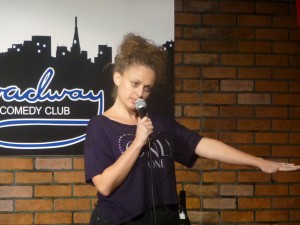 I also got to see Jason Salman who I had only seen doing five minute sets on some of my late night shows before that, but this night he did a 20 minute set and got lots of laughs with things like ” In Texas, ( where he’s from), we believe you can kill any animal for food, except a stork, because we consider that an abortion!” 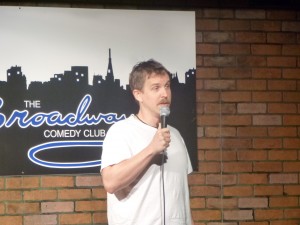 And growing up in Texas, he thought vegans and French people were fictional characters from literature!

Neko White closed the show. Neko is very funny, and is only 19 years old, which is such a great time to be performing. I’ve performed with him many times and I see great things ahead for him. He’s one of those performers that the audience just loves to laugh at. He brings a strong comedic presence to the stage.

He questions some of the things that Black people fought for in the past, for instance not having to sit in the back of the bus. He feels that’s the most comfortable place to sit on the bus, and he’s right! It’s less crowded, and the seats are bigger, but thankfully you won’t find Rosa Parks there! 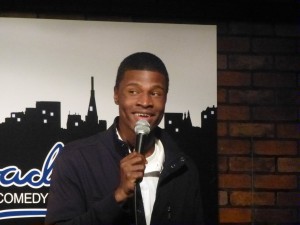 He talked about why he can’t be with “big girls”, cause he’s too thin and his bone density is not what it’s supposed to be. If a big girl layed down on him, he’s afraid his chest would pop like bubble wrap!

It was an entertaining show just like always at Broadway Comedy!