When I first met Mark Malkoff I had no idea how much we’d have in common. He’s a very interesting guy! (That’s not what we have in common! LOL) He sets himself a difficult goal and then puts all his energy into making that happen. 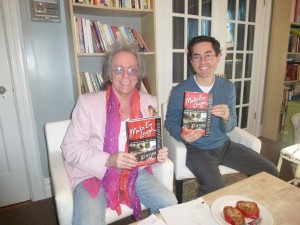 Jeffrey Gurian of Comedy Matters TV with Mark Malkoff of The Bill Murray Show on My Damn Channel!

Mark hosts The Bill Murray Show on My Damn Channel, and the sole purpose of the show is to get Bill Murray to come to Mark’s house in Queens and have dinner with him and his beautiful wife Christine. If I was Bill I’d go. When I went for the taping, Christine made me a great meal, and the two of them were so nice, and really fun!

So when I was asked to appear and talk about my new book “Make ‘Em Laugh” with Chris Rock, and my experiences with Bill Murray of which I had four to speak of, I was very excited to do so! Also because I love My Damn Channel and Rob Barnett rocks! (He’s the guy who created My Damn Channel, just so you know I’m not giving a shout-out to some random guy! LOL)

Grace Helbig’s “Daily Grace” on MDC is amazing and she gets millions, and millions of hits! I just saw her doing her version of “Gangnam Style” and she’s adorable, and does it so well. She must have gone to dancing school as a little girl in Korea! 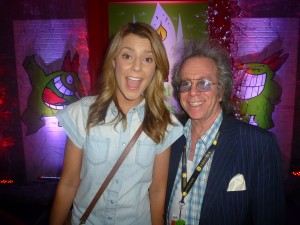 Jeffrey Gurian of Comedy Matters TV with the ebullient Grace Helbig from “Daily Grace” on My Damn Channel at the Just for Laughs Festival in Montreal!

I actually got to interview both Grace and Rob up at Montreal this past July during the Just for Laughs Festival! ( See Grace’s interview above, and Rob’s interview right here!)

So basically all the My Damn Channel stuff is super and I was psyched to be on.

The reason I relate so much to Mark is that Mark sets out to do things that appeal to him, even if they’re unusual. When I looked him up, I realized I had read about some of his exploits without realizing it had been him.

He’s a former “Colbert Report” staffer, who also visited 171 Starbucks locations in Manhattan in less than 24 hours, moved into a Paramus, N.J., IKEA for a week, and convinced New Yorkers to carry him 9.4 miles.

If I had known that I would have told him about my film I made years ago as part of the “Men Who” Series. It was part of a series of short films about men who go to work in unusual ways entitled “Men Who Insist On Being Carried To Work”! You can actually see it on my website at http://www.jeffreygurian.com, where you will also see Peter Dinklage star of HBO’s hit “Game of Thrones” starring in a film called ” Men Who Dance Where They’re Not Supposed To” and he gets arrested for dancing in a “No Dancing” zone!

So the Bill Murray thing really resonated with me because when I was in my 20’s, before I knew anyone in show biz, there were only three people I ever wanted to meet, and they were Salvador Dali, Woody Allen, and The Beach Boys, and I got to meet and spend an evening with each one of them. I actually made that happen! 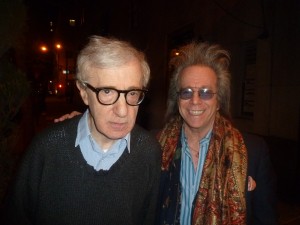 Jeffrey Gurian of Comedy Matters TV with Woody Allen in a much more recent photo than when I first met him! I made him laugh by saying, ” Hi Woody, I’m a very close friend of yours!”

And that’s when I realized that if I could lose my self-consciousness, expand my comfort zone, and not be embarrassed to go out and try things, I could basically accomplish anything I wanted, and meet whoever I set out to meet!

Each of those three events is a story in it’s own, but when I realize what I was able to manifest in those days, it’s not unlike what Mark has set out to do. And if you want something bad enough there’s nothing you can’t accomplish.

I live in Manhattan and Mark lives in Queens so ordinarily I would drive, but just that day Pres. Obama came to town, specifically to mess up traffic, so I did something I never did before! I went to Queens by train! Mark gave me great directions and it wasn’t even that bad.

We had a great time and Mark speaks comedy! The guy is a fund of knowledge about comedy and was able to speak to me knowledgeably about people that were way before his time, and people that I knew well like Milton Berle, who was was my original sponsor in the LA Friars Club, Henny Youngman,Jack Rollins, Charlie Joffe, and Alan Zweibel to name just a few!

Also there was My Damn Channel’s Jesse Cowell, the Exec. Director of Original Content, who oversees 30 new series, ( not 10, or 20, but THIRTY!) that will be debuting on My Damn Channel.

Jesse was very low key but is also a lightweight karate champ and when I watched his You Tube videos of him kicking butt, I was like, … this guy’s no lightweight! (LOL) When you’re that well versed in martial arts, you can afford to be low key. It takes great discipline to get that far, and it was always one of my dreams to be that accomplished in Tae Kwon Do. One of my very few unrealized dreams!

In my interview which will air tomorrow, Tuesday Oct. 16, 2012 and will be posted on the My Damn Channel website (http://www.mydamnchannel.com), besides talking about my new book with Chris Rock called “Make ‘Em Laugh”, you’ll hear me telling my stories of my experiences with Bill Murray: 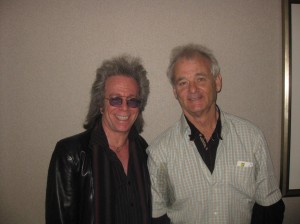 Jeffrey Gurian of Comedy Matters TV with Bill Murray at The Four Seasons Hotel in NYC! ( No, we weren’t staying there together! LOL)

1. How we originally met up at SNL in the early years!
2. How Bill Murray tried to repair my car one night during the 90’s.
3. Me and Bill Murray at a press conference for his film “Get Low”.
4. A screenplay I wrote, with Bill Murray specifically in mind for the lead called “Searching For Ed Zintz”, where as the result of a practical joke gone wrong, Hollywood winds up honoring a guy who doesn’t exist, it becomes the hottest ticket in town, people are fighting for tickets, and Bill Murray, a failed comedian, gets hired to play the guy “Ed Zintz”! But because of my ADD, I got so confused that while I was with Bill Murray, in his company, alone and right next to him, I forgot to tell him about it! 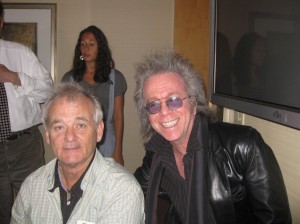 Jeffrey Gurian of Comedy Matters TV in yet a second photo with Bill Murray just to prove to myself I was actually there!

Well, if he comes to Mark’s house for dinner, maybe Mark or Christine would be kind enough to mention it, and then we can all make the movie together!

And then I think my next goal after that is to get my own show on My Damn Channel, and have Rob Barnett come to MY house for dinner!