Nick Kroll and John Mulaney Video as the "Oh, Hello" Boys in LA

At the request of Nick Kroll, I flew out to LA to be in some sketches with Nick and John Mulaney for Nick’s upcoming show on Comedy Central. For right now it’s being called “The Nick Show Kroll”, but according to Nick that could change. I brought my camera equipment with me, hoping I’d be able to film something fun on set for Comedy Matters TV. 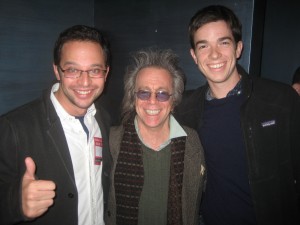 But when I got there, it was such a busy set, with so much going on that I didn’t want to impose on anyone by asking. Frankly, I was just glad to be there. I thought about asking Inman Young the producer, but held off thinking that at some point, when the time was right I’d ask Nick myself, since he was already familiar with the fact that I document everything I do with photos and video for my Comedy Matters Vlog and my Comedy Matters TV channel. 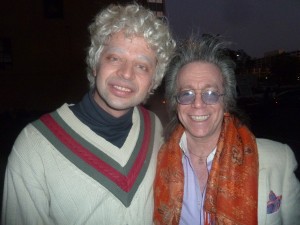 Jeffrey Gurian on set in LA with Gil Faizon, one of the “Oh, Hello” boys!

I had already asked if I could take stills during the shoot, and got the ok from Nick, so every once in a while, when I felt sure I wouldn’t ruin a scene being shot, I whipped out my ever-present camera and took some shots.

I am the guy, by the way, who accidentally put my camera down on the doctor’s sterile instruments while one of my daughters was being born, accidentally breaking the sterile chain, and had everyone in the delivery room screaming at me, while they rushed to rectify the situation. They told me it was ok to take photos, and I was so engrossed that when the baby came out, I got so excited I put my camera down on their instruments!

So it wasn’t that far fetched for me to picture accidentally taking a flash photo on Nick’s set, and ruining a scene that was being shot! I live with that fear of always doing something stupid! (LOL) Anyone else relate??? 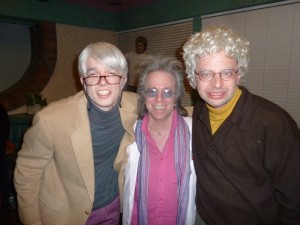 I didn’t realize how confusing it would be for me since I had planned on interviewing Nick Kroll and John Mulaney, and thanking THEM for having me on the show, and here I was interviewing Gil Faizon and George St. Geegland. This fact hit me right after my intro when I said, ” Hey this is Jeffrey Gurian for Comedy Matters TV and I’m here with Nick Kroll, or should I say Gil Faizon, and then I didn’t even say “John Mulaney”, I just said “George St. Geegland”, cause I realized that that’s who I was with.

So I’m trying to interview them, and thank them as themselves while they’re staying in character. It actually turned out very funny! See for yourselves!

The previous post on my trip to LA is right here: