I get to meet lots of fun people within the confines of what I casually refer to as “my life”, (LOL) but I have to honestly say that one of the most fun people I’ve met in a long time is Carole Radziwill, who just happens to be a real live Princess.  Fortunately, … although she’s elegant, she doesn’t act like a Princess,(in a GOOD way!) 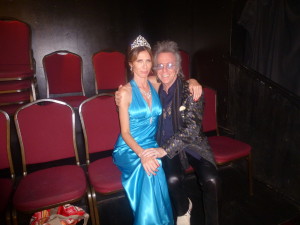 Jeffrey Gurian with Princess Carole Radziwill, who only dressed like a Princess because Jeffrey begged her to!

She became a Princess by way of marriage to Anthony Radziwill, who was the son of socialite Lee Radziwill, (younger sister of Jacqueline Bouvier, better known as Jackie Kennedy, wife of JFK), and his father Polish Prince Stanislaw Radziwill, which was how he came by the title he never used.

He passed away in August of 1999 after a five year bout with cancer during which time his wife Carole was his primary care-giver, which right away shows you a rare level of character.   Anthony was a cousin to JFK Jr. who with his wife Carolyn, and her sister Lauren, all perished in a plane crash that very same summer, while on their way to a wedding and a visit to Anthony.

The pain of those multiple overwhelming losses led to Carole’s first book in 2005, a memoir, and the NY Times bestseller, “What Remains ; A Memoir of Fate, Friendship and Love (Scribner)

And leaving her a young, attractive widow gave her the authority to write this new book “A Widow’s Guide to Sex and Dating”, coming out on Feb. 11th, (today!), and  which I plan to purchase at her book-signing at Barnes and Noble on Thursday, Feb. 13, 2014 at 7 P.M.

That’s the Barnes and Noble  at 2289 Broadway for you New Yorkers, between 82nd and 83rd streets, on the ultra-hip Upper West Side.  When you really think about it, almost every part of NYC these days can be considered “ultra-hip!”

In an article in the NY Post, Carole talked a little about her book, and a lot of it seems to be about empowerment, a topic I love.  One of the tips she mentioned was ” when he shows up 20 minutes late for a date, you shouldn’t still be there.”  I love that, and wonder if it pertains to both sexes.

I’ve had women show up hours late for a date who were meeting me at my home, and several times I didn’t want to be there or answer the door when they finally arrived.  On more than one occasion I told the doorman not to ring me, but then felt guilty about it later!

It’s the height of disrespect to show up so late, but values these days seem to have changed.  It’s probably my own fault for dating out of my generation! (LOL)

I’m looking forward to the new season of Real Housewives of NY, which premieres on Tuesday March 11th on Bravo, not only to see what Carole and the girls are up to, but also because I’m going to appear in a few episodes this season.  I got to know Carole personally when I created a comedy sketch for her and LuAnn DeLesseps to perform in. 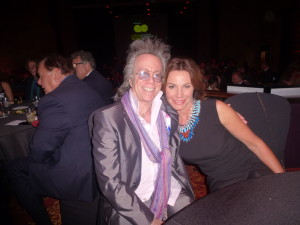 LuAnn DeLesseps and Jeffrey Gurian at a gala Jeffrey produced in honor of Susie Essman!

LuAnn and I have been friends for more than 20 years, and she had always told me she wanted to do comedy.  Last June I was out in LA shooting an episode of Kroll Show for Comedy Central and LuAnn was out there shooting a show for the Oxygen network and playing a character named “Donna” that she loved.

I went over to join her on set and she was having a blast and told me she definitely wanted  to do something comedic with me.  I told her to call me when we got back to New York, and she did.  She said that she and Carole wanted to make fun of their “royal” titles, which was very “hip” of them to do!  LuAnn is a legitimate Countess, and Carole is a legit Princess.  Both of them received their titles  the same way, … by way of marriage.

My writing partner Lance Rizzo, and I created a sketch for them that they loved, and that Bravo loved as well and it will be on the new season.  I brought them to The PIT, ( People’s Improv Theatre) founded by my friend Ali Farahnakian, who was one of the original founding members of UCB, and he graciously offered us the use of his theatre to participate in an improv class just to get the girls feet wet.  Bravo filmed us in that class. 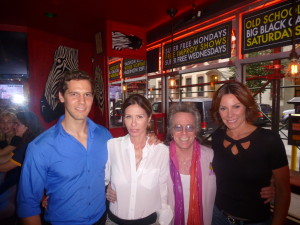 Then Bravo came to my home and filmed me, LuAnn and Carole in a planning session about the script.  I though it would be best to film the sketch as a video and show it as part of a live “improv” show at The PIT, which is what we did. 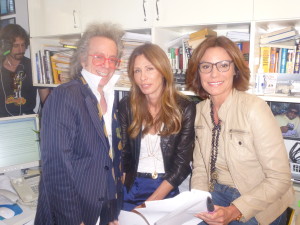 I brought in the hysterical Cult Comedy Picture Show group which I am proud to be a part of, and they filmed the sketch also at The PIT,  and some of them participated in the acting as well.   The founding members are George Gaffney, Brent Katz, and Lance Rizzo, along with Jake Hart who was our main host and voice over guy for the sketch. 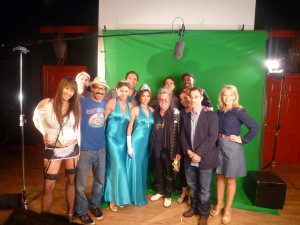 The cast of Cult Comedy Pictures at The PIT for the RHONY shoot!

Then we filmed the actual live show at The PIT where we showed our video sketch, the details of which must remain secret until the show airs.  And then after we wrapped the season, Carole had a surprise 50th birthday party which I was invited to and that got filmed for the show as well. 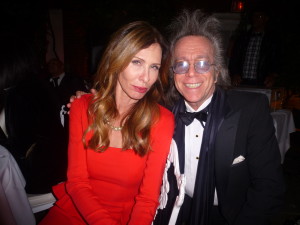 Jeffrey Gurian with Carole Radziwill at her 50th birthday party!

So I can personally attest to the fact that Carole is a spectacular and fascinating person, who is so funny and delightful, (much funnier than she even realizes!), and I hope you’ll join me at her book signing where I plan to buy the book and report back to you!