Sherri Shepherd Kills It At Gotham

Most comics have to worry about winning the audience over. Sherri Shepherd is one of those rare comic performers that the audience likes so much, they’re already on her side when she hits the stage. Gotham Comedy is a big club and when I got there it was so crowded for Sherri that my usual table was gone. 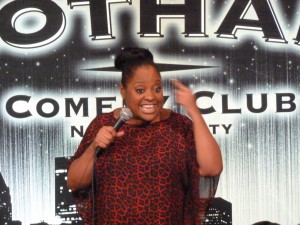 Sherri Shepherd killing it onstage to a sold-out crowd at Gotham Comedy Club!

Fortunately I got an even better table since I need to sit way in the back so I can jump up to greet the performers and get my photos during the show without disturbing anyone. I wound up with the corner table that had good light and put me right next to the comics who were on the show.

Angelo Lozada was the host, and he’s great at warming up an audience, which is a lot harder than just coming out and performing. I should never use the word “just” because coming out and performing stand-up comedy is the hardest thing in the world, even though Joel McHale once told me that he thought that brain surgery might be more difficult! (LOL – Your cue to laugh!) 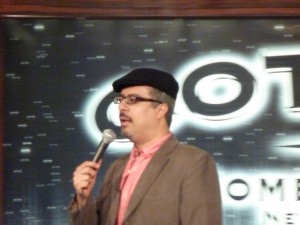 Angelo told about a homeless guy on the train, and imitated the usual spiel, “Good evening ladies and gentlemen, I don’t mean to disturb anyone. I’m just trying to get some money to get my son a tattoo, and to start a record label.” 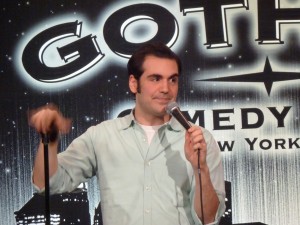 Harrison Greenbaum, Harvard grad, who explains how having sex with another guy is the straightest thing you can do!

He embellished upon that by saying, ” How do you know you’re not gay unless you’ve had sex with another man? That’s the straightest thing you can do is to have sex with another man and then say you didn’t like it.” He explained it so well, it almost made sense! (LOL)

He’s also very clever with lines like,” My friend reads the Bible religiously, which is really the only way to read it!”

Next up was Brad Trackman who I think I know even before he married his lovely wife Christina, who used to book acts at Carolines. Brad is one of the few comics who is always a hit and works clean. 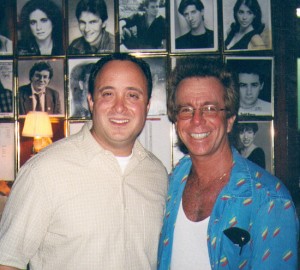 A photo of Brad Trackman and Jeffrey Gurian of Comedy Matters TV taken at The Comic Strip, circa 2002!

One of his CD’s called “Safecracker” is based on a killer bit he does about women being like safes and men having to figure out the combination to get into the safe. A compliment like ” Of course you don’t look fat in those pants” is like 22 to the left, etc. knowing full well that men will say anything they have to to crack the combination to the safe!

I heard rumours that Brad may be in line for a show! More on that to follow. He said his wife has trust issues and he knows that for a fact because he read it in her journal! That is really funny! And when she asked him if he would still look for her if they were both in Heaven, he had to remind of of their marriage vows, ” Til death do us part!” It’s Heaven, and he’s not making any promises!

Then Sherri took the stage to thunderous applause. She’s one of those performers that people like before she even says a word. There’s not that many. I once saw Artie Lange get a standing ovation just by coming out on stage!

Sherri automatically endears herself to the audience, but don’t tell her she’s adorable, or you’ll never hear the end of it. She hates being called “adorable” and I understand it cause I always hated it when people said it about me too! “Adorable” is more for a pet or an infant, not a grown-ass adult! (LOL) 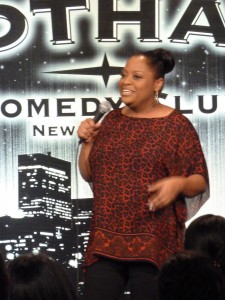 Sherri Shepherd in the midst of one of her funny stories onstage during her headlining gig at Gotham Comedy Club!

People love Sherri because not only is she funny, but she’s honest and self-effacing. In talking about her preparation for Hurricane Sandy she said she stocked up on lots of food, and then ate it all in one day!

She talks about washing her wig, and even warned her son Jeffrey, ” Don’t you lie to me. I got eyes in the back of my wig!” And if you ever saw Chris Rock’s documentary entitled “Good Hair” on the state of Black women and their hair, you know not to fool around with a Black woman and her hair! That’s serious bizness!

Sherri replaced Star Jones as a co-host on The View back in 2007, and has also appeared on 30 Rock, Entourage and Hot in Cleveland. She’s also landed supporting roles in a range of films, from the 2009 drama Precious to the 2012 action comedy One for the Money. Also in 2012, Shepherd did a stint on Dancing With the Stars, and had some really funny stories about that, and how she got eliminated from the show. Meanwhile, just being on it is an honor in itself.

Ask Jeffrey Ross who was on for only a short time when his dancing career got put on hold due to a finger in his eye! Very hard to dance with a finger in your eye!

Sherri claimed as she was running towards her partner for him to lift her up in the air she swore she heard Maksim Chmerkovskiy say ” Ohhhhhh Jesus!”

Sherri is a great story teller. Some comics just get up and tell jokes. Others are able to tell stories. She’s one of those. She talks a lot about her new husband who she calls “Sal”, who’s supposedly very tall. 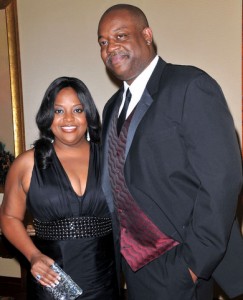 When I heard her call him “Sal” I thought she married some big Italian guy until out of curiousity I looked it up, and saw that her husband’s real name is Lamar Sally, “Sal” for short, which made a lot more sense to me! (LOL) Her son’s name is Jeffrey which I feel is one of the greatest names to come along in all of history! (LOLOL)

I recently ran into Sherri after a guest spot she did at The Comic Strip and was able to give her a copy of my new book with Chris Rock called “Make ‘Em Laugh” about the 35 year history of that legendary club! My co-author was owner/founder of the club Richie Tienken, who appears with us in the photo below. 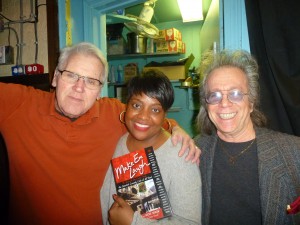 Sherri is really fun, and really funny, and I hope to be able to interview her soon for Comedy Matters TV!