When I heard that Steve Byrne would be performing at Gotham Comedy Club I made sure to get over there and catch his show. He was always a favorite of mine and I was wondering why I hadn’t run into him for a while. When he told me he had moved to LA back in 2004, it all made sense to me! (LOL) That must have been the last time I saw him! 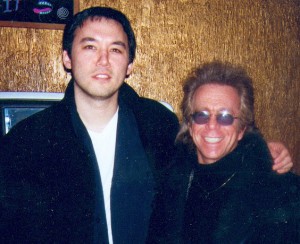 Jefrfey Gurian of Comedy Matters TV with Steve Byrne at Luna Lounge back in 2004, before his move to LA!

Steve has an interesting background, being half Korean and half Irish. I want to say I first met him when I was judging an Asian comedy contest, many years back, but that could be wrong. All I know is that he endeared himself to me because when I saw him at Gotham he told me I hadn’t changed a bit from the last time we saw each other, and that was seven years ago! (LOL)

Steve now performs all over the world, and has even opened for musical superstars like Kanye West and Mariah Carey.

One of his half-hour Comedy Central Presents specials was voted as one of the best specials of all time in the Comedy Central Standup Showdown. His hilarious standup has been seen on NBC’s The Tonight Show, The Jay Leno Show, ABC’s Jimmy Kimmel Live, CBS’s The Late Late Show and BET’s Comic View.

As a big supporter of the US troops, Steve also headlined several USO tours in Afghanistan, Iraq, Japan and Guam. On the big screen, Byrne appeared in the recent hit comedy blockbuster Couples Retreat, which I absolutely MUST see because I understand my dear friend, gorgeous Kali Hawk is one of the stars in that film as well, plus Steve was in Four Christmases opposite Vince Vaughn and Reese Witherspoon, and The Goods: The Don Ready Story alongside Jeremy Piven.

This night at Gotham, Steve had one of the strongest closes of any comic I’ve seen. He chose five guys from the audience to be a “boy band” and dance for one girl who he also chose from the audience. He gave them each very bizarre names which they had to answer to, and they each had to give the chosen woman kind of a lap dance. It was HYSTERICAL and the audience loved it. 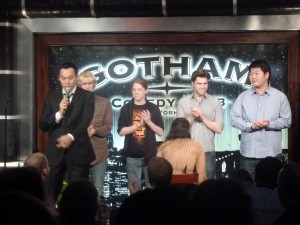 Steve Byrne coaching his “boy-band” on stage at Gotham Comedy Club! Colin Jost, whose boy-band name I can’t recall, is 2nd from right!

One of the five guys happened to be talented comic Colin Jost who was one of Steve’s opening acts, and who writes for SNL, and also appears a lot at The Comic Strip. 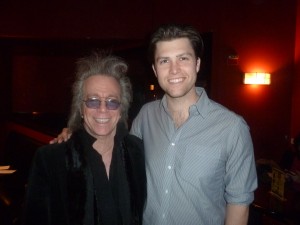 Jeffrey Gurian of Comedy Matters TV with Colin Jost of SNL fame, who opened for Steve Byrne, and wound up as part of his “close” as well!

I hope it isn’t as long before I get to see Steve Byrne again. He’s a real crowd pleaser, and a heck of a nice guy! 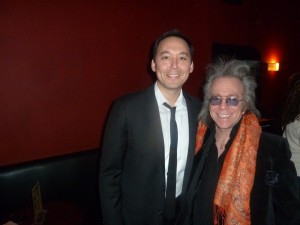 Jeffrey Gurian of Comedy Matters TV with Steve Byrne at Gotham Comedy Club for one of Steve’s sold-out shows!