Cipha Sounds is one of the busiest guys in comedy. He produces about a show a minute these days. At least it seems that way. Every time I check my e-mail there’s another Cipha Sounds show and they’re all good!

As soon as he ends one show he starts another, and for a guy who gets up at 3 A.M. every morning to do his radio thing on Hot 97, that’s not easy! 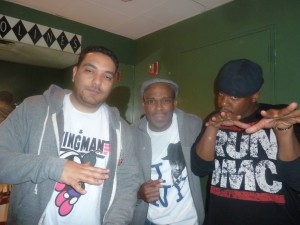 But I knew I had to catch his birthday show. I recently shot a cool video with Ciph at the Comedy Juice show at Gotham, where he finally explained to me what “Don’t Get Gassed” means cause that’s the name of his show. It’s the “Don’t Get Gassed Comedy Series.”

It’s an old school hip-hop expression for don’t get carried away with yourself. He was once interviewing Russell Simmons and DJ Funkmaster Flex yelled out in the background during the interview, “Hey Cipha, don’t get gassed. DON’T GET GASSED!”

And Cipha liked the expression so much, he used it for the name of his show. In the interview he told me about the birthday show, so I knew I had to show up and support!

It was a great line-up of talent, and I got to meet a couple of new guys I had only heard about, but had never seen before, Trixx, Esau McGraw, and Tony Roberts.

Cipha opened the show, and he does a round up of all the races in attendance. He salutes each one in their own dialect, and he does a very good “White” voice, which he explains by saying, ” I speak job interview!”

Then he goes around the crowd asking interesting questions. To one couple who he asked if they were married, and who said “yes”, he said, ” Black married or legally married?” That’s hysterical! He was like, ” How many years are you Black married for?”

He asked another guy, ” What part of Queens are you from, … Riker’s Island? (For those of you from out of town, Riker’s Island is a prison! LOL)

Then Trixx came out, and he’s from Toronto. Funny dude! He had this advice for White people: “Stop inviting Black people to go camping. We don’t wanna go!” And it’s true, you never see Black people camping. 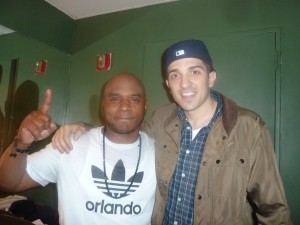 Thanks to comedic affirmative action, they had a white comic on the show too, and it was Andrew Schulz. He was a big hit, and talked about his three female roommates, and how much hair he finds around the apartment. “It’s like living with three cats”, he says!

He went on to say, ” I don’t know how men go bald. It’s women that are losing all the hair.” He went into the bathroom and pulled what looked like a wolf out of the drain! (LOL)

On Mexicans: Mexicans are hard working people. Just to prove it to you, are there any Mexican’s here tonight? You see, they’re all working!”

People say that Mexicans steal our jobs. If you were going to steal a job, wouldn’t you steal a good job? What do they do, walk into a kitchen with a gun and say “Give me those dishes! This dishwashing job is mine!”

Then I got to see Esau McGraw. I knew I was going to like Esau even before I saw him from what Cipha told me in the video I shot with him the week before. Esau also had a great singing voice and he brought the audience to it’s knees with laughter. He had them gasping for breath, he was that strong!

He told of his uncle, who I think lives in Florida and lost 315 pounds, but now has all that extra skin. He has so much extra skin, when he goes swimming he glides around the pool like a stingray! (LOL) Great visual!

He also just found out that his step-Dad is his real Dad, and he was like, ” All those Sundays I sat on the porch waiting for you to come visit me, and you were here all the time?”

Esau is a Biblical name after the story of Esau and Jacob. I think their father was blind, and Esau was very hairy, and tried to steal his brother’s birthright. In other words, he tried to trick his father into giving him some land that was meant for his brother, but when his father felt his arm and felt how hairy it was he realized he was being tricked! So Esau McGraw is such a cool name. It’s almost like a Biblical cartoon name!

Ruperto Vanderpool, who is always a killer performer, and is so talented, came out as a surprise and did a character piece as “Dominican Tupac”. That man can dance, and has abs of steel! The audience loved it and they had no rehearsal at all. He and Cipha put it together right before the show, and I was backstage with them and saw the whole thing. They just put it together on the spot! 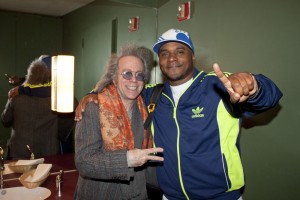 Jeffrey Gurian of Comedy Matters TV with his son Tony Roberts backstage at Carolines! Can you see the resemblance???

Tony Roberts from Detroit was the closer. After we met and kicked it a bit we found out we were both friends with Frank Holder from Humor Mill Magazine, who hopefully will be posting this article! (LOL)

Tony came out singing this really funny song, which I think he wrote called “You Need Your Ass Beat”, and most songs that people write are lame, but this one wasn’t. It was actually funny the way he did it, and I think it’s on his new DVD, “Bitch Where You Been!” I’m not even sure if he was kidding or not with that, but I guess I can always check it out on Google!

He is so high energy, it’s not common to see someone work a stage like that. He almost makes Chris Rock look lethargic! (LOL)

But the best part was after the show in the dressing room. A video guy from Hot 97 came in to ask Tony to do a “drop”, (a promo for the station), and right in the middle of it, he pulled me into the frame, and said I was his Dad, and that he was so happy to see me! I can’t wait to get a copy of it and show all you guys!

As a matter of fact, we all had so much fun that we all hung out after the show right outside the club, and talked comedy till my meter ran out and I had to run, cause in NY a ticket is $130. bucks! And that’s really CRAZY!