Next Generation of Stars At The Comic Strip

Well, after four years of hard work the final manuscript on the 35 year history of the legendary comedy club “The Comic Strip”, that I wrote with owner/founder Richie Tienken was handed in, and should be coming out in October of this year from Skyhorse Publishing. Chris Rock is writing the introduction. 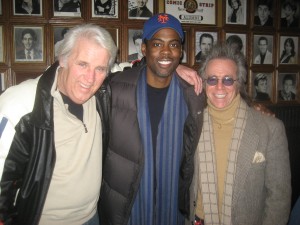 Since The Strip is like a family, I broke down the chapters into things like “The Parents”, which were Richie and Bob Wachs, “The Older Kids” who were like Jerry Seinfeld, Larry Miller, and Ray Romano, “The Younger Kids” who were like Lisa Lampanelli, Jim Gaffigan, and Judah Friedlander, and a chapter called “The Next Generation”, kind of like the grand-children, the up and comers, who will be the next stars of tomorrow coming out of The Strip. 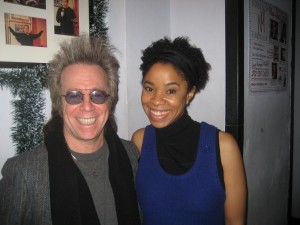 Jeffrey Gurian with Marina Franklin whose “home” is at The Strip! 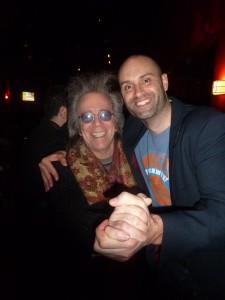 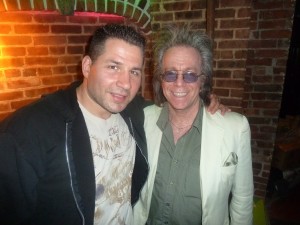 Jeffrey Gurian and Mike Vecchione hanging out casually backstage at The Strip! (LOL)

Then there’s a group of really young comics who work out regularly at The Strip, like Pete Davidson who’s 18, lost his firefighter Dad Scott on 9/11, and has been taken under the wing of Nick Cannon, who he now tours with and opens for; Nore Davis, also a “young ‘un” who’s been taken under the wing of Tracy Morgan, (not only birds have wings, “angels” have wings too!), and has appeared on Russell Simmons “The Ruckus” with J.B. Smoove; and Jordan Rock, just turned 21, who hosts late shows at The Strip on Wednesdays and Thursdays, and is the latest in line in the Rock comedy dynasty along with his brothers Tony and Chris. 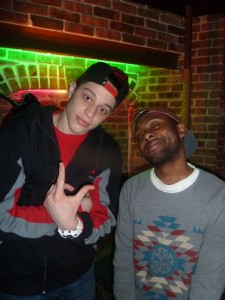 Pete Davidson and Jordan Rock chillin’ backstage while waiting to go on at The Strip!

Then there’s two young guys who are already on TV, and happen to be on the very same show. Colin Jost is a senior writer on SNL, but as a stand-up has been seen on Jimmy Fallon and was featured at the prestigious Just For Laughs Festival in Montreal, and Jay Pharoah, who drops by The Strip very often to work out new material is a regular cast member on SNL. He’s an incredible impressionist, and will soon be seen in the upcoming films “Lola Versus” with indie favorite Greta Gerwig, and CBS Films’ “Get A Job”. 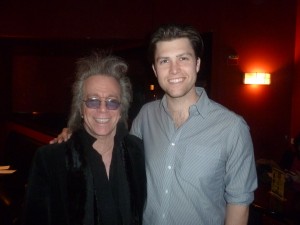 Jeffrey Gurian with Colin Jost from SNL, a regular at The Strip! 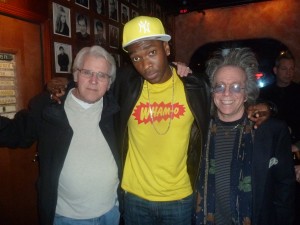 Richie Tienken, Jay Pharoah from SNL, and Jeffrey Gurian at The Strip!

With this kind of talent calling The Strip “home” you can be sure it will be around for many, many more years!

Not all comedy clubs do business on a Sunday night but when I stopped by Broadway Comedy Club the place was busy on a Sunday night and had shows in three different rooms. Unable to spread myself that thin, I chose the main room where I got to see Backstage competition winner Giulio Gallarotti, (who despite his name insists he’s Italian!), host the show. 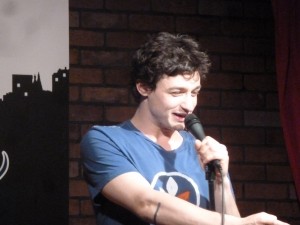 Giulio won the “Young Guns of Comedy” competition during the Stand-Up 360 Comedy Festival that is held at Broadway Comedy annually, usually in June, which means there’s another one coming up soon! I performed in a show on the last one that was produced by John Femia, and it was a great show.

Brian Scott McFadden is a guy I could listen to all night. He’s such a wordsmith, and as a writer I really admire that. And his character work is superb. He should really be a regular on TV. 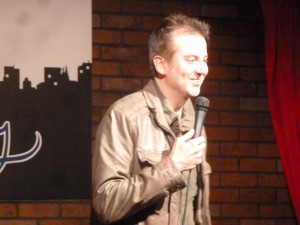 Brian Scott McFadden onstage at Broadway Comedy doing one of his many great characters!

Out of the many characters he does, one of the stand-outs is an old guy who works in a boxing gym, who repeats what he says over and over again, but it’s so well planned out that he claims to stay in the character too long, due to the the audience’s supposed “lack of response”. Its hard to even explain what he does with the bit, but it’s genius, as is his ” What Women Want” which I believe is the name of his new DVD.

He also wonders about things like why there’s no mouse-flavored cat food, and why there are no “B” batteries which is one of the greatest questions I ever heard. There are A, double A, even Triple A, and then it goes right to C. What happened to “B” batteries?

That’s what good comedians do. They take something you’ve been seeing and taking for granted all your life, and they show you how obvious, and yet how ridiculous it is, and YOU respond with laughter!

Joe DeVito is always funny and one of my favorites, and I’m not just mentioning this to mention it, I’m mentioning it because he was on next! (LOL) Well, that and the fact that mentioning things is a hobby of mine! 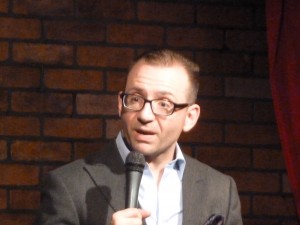 A newly thin Joe Devito onstage at Broadway Comedy. I would have said “svelte” but I once swore to myself I would never use that word!(LOL)

Joe claims that a medical condition kept him out of the service. He was diagnosed as a pussy! And the doctor wrote it into the chart, which was so embarrassing for Joe.

Joe lost 30 pounds and looks really great. He claims he was bullied as a kid cause he was fat, and he wonders if that kind of stuff still happens these days cause now ALL kids are fat! (LOL) He says that kids are so fat, abductions are down. They can’t get the kids in the van!

I was glad to see Harris Stanton on the show. Harris was close to my good friend Patrice Oneal who we lost so prematurely this past year. Harris is a real crowd-pleaser and talked about how technology has made some people into assholes. They demand to know where you are at all times. And they expect you to get right back to them, and if you don’t they complain, ” Hey, I sent you three text messages, an e-mail and a photo! Where are you?” 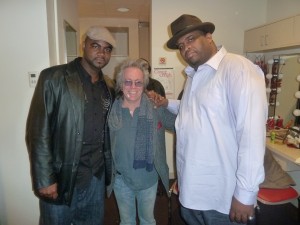 He also doesn’t feel sorry for people who get hurt mountain climbing, cause people don’t belong way up in the mountains. That’s where G-d lives! And he also doesn’t feel bad for people who get bit by sharks. Where did it happen? In the ocean! That’s where sharks live. If you got bit by a shark in the supermarket, like in aisle 8, he’d feel bad for you, cause sharks don’t belong in the supermarket, but if you’re stupid enough to go where they live, you have to expect to get bit! 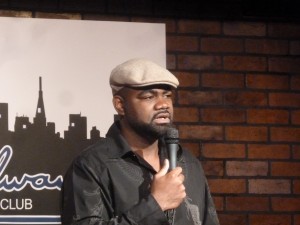 On my way out, I ran into Martin O’Keefe. Martin runs the New Faces stand-up show called “Poster Dog Comedy Show” which he does every Sunday, in the upstairs Chicago City Limits room. At certain times during the week you can go to that room and see a great improv show. Check the schedule at www.broadwaycomedyclub.com for details!

I like dropping by Broadway Comedy Club unexpectedly because you never know who you’ll see there. Saturday night is usually packed so I thought it would be a good time, and I was right. 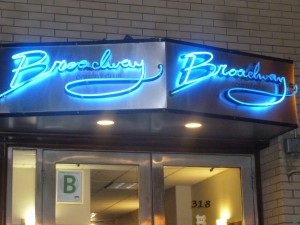 I got to see a great line-up of comics, hosted by the very funny Chris Murphy, who looks more like a rock singer than people tell me I do! Chris is very funny and commented on his appearance by saying that as he was walking in the street some guy yelled out ” Faggot”, and he was pissed off, but of all the guys on the street, he was the only one that turned around! 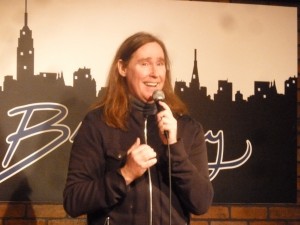 Chris Murphy MC’ing the show at Broadway Comedy with his long, rockstar hair!

He also commented on his Irishness and their proclivity towards the drink! He said his own father got a DUI while taking his driving test! And it was on the written part! That’s hysterical!

Next up was Dustin Chafin, who I know for a long time, and who also has a look of his own! He’s originally from Texas, and always wears a cowboy hat, but describes his look as a guy who “should be selling meth at a gay rodeo!”

He says he’s from a little town in Texas called “Racism.”

Bill McCarty is a real pro and has been performing for a long time. I think that’s why they gave him the infamous “check spot”! It’s the hardest spot to take cause people are reviewing their checks and arguing over who ordered “gratuity” and things like that! Bill said his health insurance plan is so bad, if he gets sick, he has to find the nearest school and go see the school nurse. 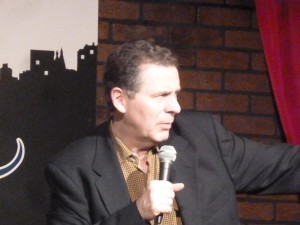 Brian Scott McFadden who I covered in a recent Blog post was also on the show and killed it as he always does. He recently came to the attention of the producers of the new “In Living Color”, who I was helping to find people to audition, for the new show, and I told them about Brian’s strength doing characters. There aren’t many comics who can do so many strong characters. Hope he gets it!

And Russ Meneve was also on the show and is a favorite of mine. You’ve seen him on Letterman and Leno. He’s very edgy and even more than he was before. He’ll say things like, ” Did you ever get a girl so turned on you can feel her nails through your ski mask?” Very edgy! 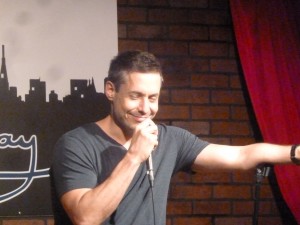 Russ Meneve who’s so relaxed onstage he can even lean on the mic stand!

On finding a condom in the street: ” Are you telling me that there’s a person so reckless that they’d have sex in the street, yet so responsible they use a condom?” That’s funny!

He told about the Asian delivery man who got stuck in an elevator for hours because he couldn’t find the “R” for “Robby”! That’s like my joke about going into a Chinese restaurant so drunk, I tried to order a sandwich. They got so confused they called the police. And all I remember is someone yelling, ” No blead! We no have blead!” ( Bread, get it??? LOL) And I was like, ” I don’t bereave you!”

What’s also cool about Broadway Comedy is that they have these big flat screen TV’s around the room so you can see the performer wherever you’re sitting. 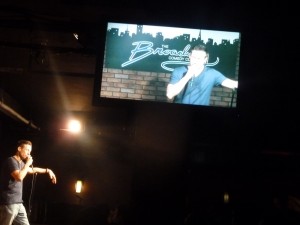 Russ Meneve, literally star of both stage and screen,(LOL) at Broadway Comedy Club!

Russ is also a good ad-libber which is so important and a skill I’m working to improve onstage. He asked one guy in the audience what he does to get sex, and the guy said he goes out “clubbing.” And Russ said, ” By “clubbing” you mean you club women and drag them into your van?” That was really funny!

All in all a great night at Broadway Comedy on West 53rd Street in the heart of Manhattan’s Times Square area!