It’s always a good feeling when you can be happy for a friend’s success, and when your friend happens to be Rick Newman, you could literally be happy all the time! (LOL)

Rick and I go back a long way, as we were reminiscing on the phone the other day, and he was kind enough to give me a very special scoop which I will share with you Comedy Matters guys! 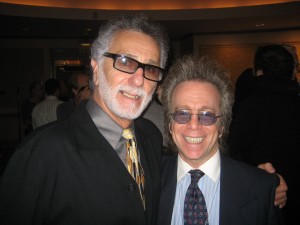 Rick Newman and Jeffrey Gurian of Comedy Matters TV at the Friars Roast of Pat Cooper in 2007!

Rick and his partner, Peter Martin, have undertaken a complete overhaul of what was The Triad Theatre on West 72nd Street, (which has been owned by Peter for the last 16 years!), to come up with a place “non pareil” in New York nightlife, (in other words, that can not be compared to, for you non-linguists), which will tentatively be called “Variety 72 Theatre.” 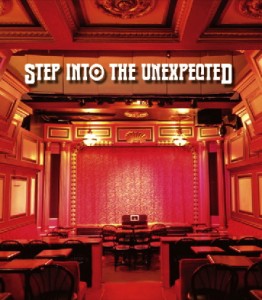 This is the former space where once a month, on Monday evenings, for the last four years, Rick has been offering his international hit “Celebrity Autobiography”, where celebs come in and read other celebs autobiographies, and audiences go crazy for it.

Some of the New York regulars who appear are Susie Essman, Joy Behar, Matthew Broderick, John Leguizamo, Martin Short, Brooke Shields, Mario Cantone, Sherri Shepherd, Alan Zweibel, Rachel Dratch, and Kristen Wiig! It’s like a Who’s Who of showbiz! And I hear there’s actually a waiting list of celebs who would like to appear.

This new expensively overhauled theatre is set to be re-launched this coming November, right in time to run a week of shows during Caroline Hirsch’s New York Comedy Festival. As a matter of fact, the entire month of November will feature new “avant garde” productions in comedy, music, one person shows, plays, and seminars, and right now I’m thinking about what I could present in that one-of-a-kind space! According to Rick, “there’s no other place quite like it”, and he should know!

They even installed a complete state-of-art projection unit for screenings plus a luxury green-room. Rick has always stayed current with trends so part of the transformation of the theater “is to make it flexible and be able to use as a studio for the Internet”, he said.

“It’s a natural extension of what Peter and I have been doing for many years … providing new platforms and exposure for new writers, musicians, comediennes, comedians, bands, original plays, one person shows, animation, short films,etc. We are hoping to be able to provide new original programming for the Internet and for fresh talent and their ideas.”

And it will be nice not to have to run all the way downtown for this experience, as many art houses are down in Tribeca. This is great because it’s on the Upper West Side! I can’t wait to take him up on his offer to give me a private tour!

And now with Rick’s collaboration with longtime friend Orin Wolf of Off Broadway Booking, (which is a hot beautique agency that takes successful Off-Broadway shows on the road), Celebrity Autobiography will be touring internationally as well. They always wanted to do something together and I think that this definitely falls into that category! (LOL)

As a Broadway producer Orin is involved with the new hit “Once” which opened to rave reviews on Sunday, March 18, 2012. A national tour will begin in the summer of 2013, and the cast recently appeared on The View.

And the story of how Rick came to be involved with Celebrity Autobiography is also a great story. Four years ago, our mutual friend Susie Essman, star of HBO’s hit “Curb Your Enthusiasm”, called Rick all excited and told him he needed to come and see her in this show Celebrity Autobiography. He went, and was hooked from the first night. 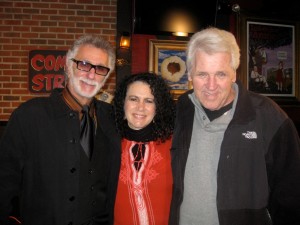 Rick Newman, Susie Essman, and Richie Tienken the day we did Rick and Susie’s interviews at The Comic Strip for the new book on the 35 year history of The Strip called “Make ‘Em Laugh”!

The final part of this exclusive Rick Newman scoop is that on top of everything else, he is the Exec. Producer of a new online series for Comedy Central called “Thirty Seconds Over Washington” and it’s an updated version of a show he did 16 years ago for HBO, with Dennis Miller and Bill Maher.

It consists of political commercials with comics doing analyses and comedic commentary before and after the commercial. I love stuff like that because it’s so fun and so easy to poke fun at these pompous buffoons who take themselves so seriously, while making decisions that affect the course of all of our lives. This is a show I can’t wait to see. I’m not particularly political, but you don’t have to be Mort Sahl in order to see the humor in this type of stuff.

Rick appears in my new book with Chris Rock called “Make ‘Em Laugh- 35 Years of The Comic Strip, The Greatest Comedy Club Of All Time”, a book I wrote with Richie Tienken the owner and founder of The Comic Strip. What is especially nice about having Rick in the book is that at the end of 1972, Rick opened up the second big comedy club in New York City called “Catch A Rising Star”. The Strip opened in 1976.

Before that it was just Budd Friedman’s “Improv” which opened in 1963. Catch had regulars like Larry David, Robert Klein, David Brenner, and Billy Crystal. Richie Tienken was present when I did Rick’s interview at The Strip and Richie had the opportunity to tell Rick that he was his idol and the inspiration for The Comic Strip. That was a very special moment in comedy history and I felt privileged to be present for that, … with these two lions of comedy! 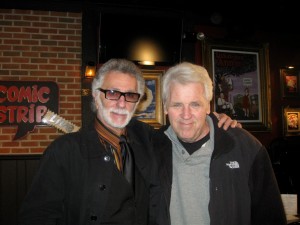 Rick Newman and Richie Tienken, the two “lions” of comedy at The Comic Strip, for the book I wrote with Richie called “Make ‘Em Laugh.”

When I launched Comedy Matters back in 1999, Rick was one of the first, if not THE first one-on-one interview I did, because I never wanted to just focus on the talent. I wanted Comedy Matters to also be about the people who made things happen in the comedy world, and Rick has always been one of those people. 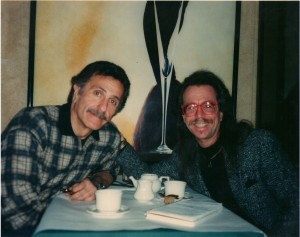 Rick Newman being interviewed by Jeffrey Gurian for Jeffrey’s new column at the time called “Comedy Matters”, circa 1999. We both had darker hair and matching moustaches!

On top of everything else he does, Rick runs the Activities and Entertainment Committee at The Friars Club with Prior Stewie Stone, and plans special events for the club. 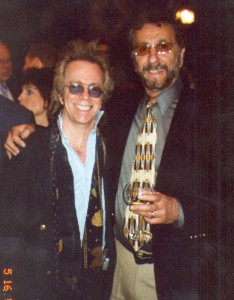 Rick Newman and Jeffrey Gurian of Comedy Matters TV at The Friars Club back in 2006!

We wish Rick lots of luck in all of his many endeavors!