I’m becoming a “Juice” addict. Every Tuesday around 9:30 I find myself wandering over to Gotham Comedy Club to see the Comedy Juice show. I can’t seem to help it! They always have a strong line-up. (Not a line-up as in what you’d see at a Police station, where you’re expected to identify someone. This is a comedy line-up, where you don’t have to identify anyone! LOL) 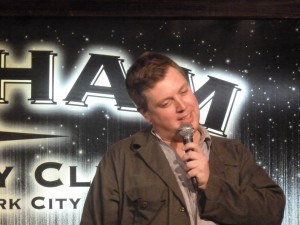 Jared Logan was hosting the show and he’s a really good MC. At one point there was kind of an angry woman in an unwanted dialogue with Jared, and she was saying something negative about New York City, that it made her realize how much she missed the small village near a stream where she came from.

Instead of yelling at her and trying to put her down, Jared made the opposite choice and did a bit of self-deprecatory humor telling her, ” I bet you’re wondering why a fat Lesbian is yelling at you on a microphone!” And that solved the problem. She finally shut up!

I was so glad to run into my boy Cipha Sounds from Hot 97 who came in to do the show. Cipha has to get up at 3 A.M. every day to be on the radio for his show Cipha Sounds and Rosenberg. He considers himself mainly a hip-hop DJ, and only recently began calling himself a “comic” when he felt he had enough experience to own that title.

Cipha’s real name is Luis Diaz and he’s from The Bronx, as he says, the only borough with a “The” in front of it. No one says, “The Queens”, or “The Brooklyn”, only “The Bronx” gets that distinction! I too am from The Bronx, so we had something else to bond over! (LOL) 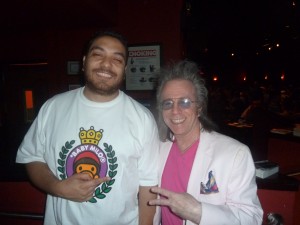 He is one busy guy, and is always producing a show somewhere. Recently he did his annual April Fools show at Madison Square Garden with Marlon and Shawn Wayans, JB Smoove, Tommy Davidson, and a bunch of other heavy hitters, including a guest spot from a favorite person of mine, the very funny Chaunte Wayans! 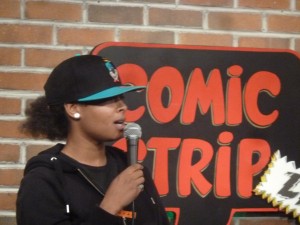 This coming Tuesday, April 24th he’s doing a birthday show at Carolines with Tony Roberts. They both share the same birthday. One year Cipha celebrates and the next year Tony gets to celebrate! (LOL) 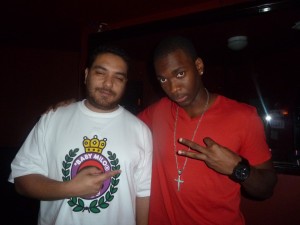 Cipha Sounds from Hot 97 and Jay Pharoah from SNL who’s executing a very difficult and very different kind of hand signal I had never seen before, and I’m pretty fluent in hand signals! (Not!)

He also does his Friday night shows at Laugh Lounge with Burt Smooth, and a killer line-up. Everybody wants to perform with Ciph! One of these days, I’m gonna hit him up for a spot! (LOL) 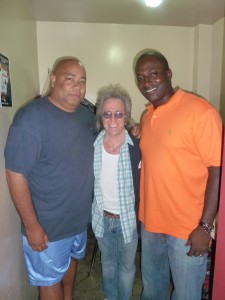 After his killer set, Cipha and I hung out downstairs in the green room of Gotham, and we shot this awesome video interview for Comedy Matters TV where I got to ask him all kinds of cool stuff, and he even answered me! He worked his way up to an on-air guy over 14 years that he’s been at the station. He is one hard-working M-F’er!!! (LOL)

Check out the video right here:

Also on the show was a favorite of mine, Jay Pharoah from SNL who I just added to my book on the 35 year history of The Comic Strip coming out this October from Skyhore Publishing. Jay is not only funny, he’s one of the most talented impressionists around. 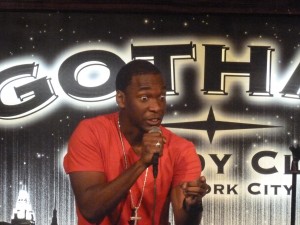 Jay Pharoah getting into it onstage for Comedy Juice at Gotham!

He does such a great Chappelle, along with Kanye West, Jay-Z, Weezy, Dreezy, and that other great rapper Obama, (LOL) plus Eddie Murphy and Denzel. When he does Denzel you’d think Denzel was in the room. No wonder he’s such a favorite on SNL. He was there with his manager Shayna. 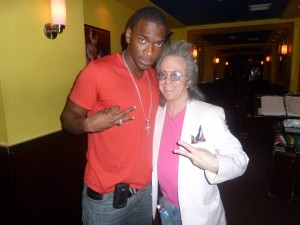 Jeffrey Gurian of Comedy Matters TV with Jay Pharoah from SNL at the Comedy Juice show at Gotham Comedy Club!

Closing the show was a guy I had never seen before, but I’m sure I will see again. His name is Michael Lawrence, and as soon as I saw him I was like, this guy has to live in Brooklyn. In Brooklyn these days it’s important to take on the appearance of a woodsman, or a Civil War era farmer. 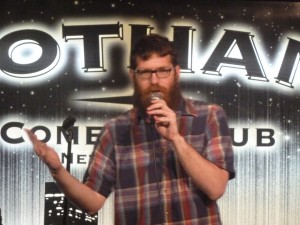 Mike Lawrence and his beard, on the loose at Gotham Comedy Club for Comedy Juice!

They seem to be going for the Unibomber look of a guy who lives alone in a cabin in some remote part of the woods, where no one can bother him and he can just sit by the fire and write jokes. I think maybe Zach Galifianakis started this look, and if you can attain that kind of success, I might be trying that beard thing next.

Look at Jason Mantzoukas. He and his beard are starring in the new Sacha Baron Cohen flick “The Dictator.” 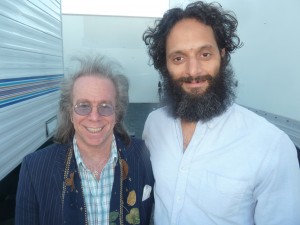 Jeffrey Gurian of Comedy Matters TV, with Jason Mantzoukas and his beard on the Nick Kroll set in LA! Watch for Jason in “The Dictator”!

Anyway, back to Mike Lawrence. This guy was really funny. He said he recently got into a fight with a homeless guy, who thought that HE was a homeless guy trying to cut in on his turf! 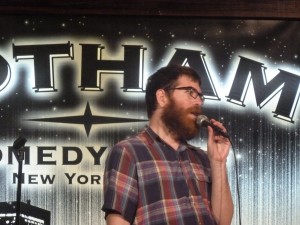 Mike Lawrence, not only a funny comic but one of the pre-eminent beard painters of his generation, who recently painted a replica of the Cistine Chapel with his beard!

He also said, believe it or not he’s in a relationship, and it’s actually going well. It’s been 10 periods already!

And he dispensed wisdom like, “When a bald man masturbates, it’s like he’s strangling a tiny version of himself!” The audience loved him. I tried to see if he left in a camper, but I got distracted.

Anyway, I’ll be back next week for more Comedy Juice!