Jessica Biel and Justin Timberlake Back On Again?

Posted by Jeffrey Gurian on September 1, 2011

Page 6 in the NY Post reported that Jessica Biel and Justin Timberlake were spotted at the interactive play in Chelsea called “Sleep No More”, and then they were spotted riding bikes together. They had been together for 4 years before they broke up. It’s always nice to see people trying to make it work. We wish them well!

When I met Jessica at the press junket for Easy Virtue, a film she did with Academy Award winner Colin ( The King’s Speech) Firth,she was incredibly nice and forthcoming. She played the kind of role where you fall in love with her cause she was just so cool, and rebellious, and beautiful! Justin has good taste in women and is lucky to have her! 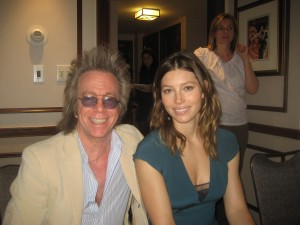 Jeffrey Gurian with Jessica Biel at the press conference for Easy Virtue with Colin Firth!