Peter Dinklage of "Game of Thrones" in Early Comedy Film

I first met Peter Dinklage more than 20 years ago, and I’m pretty sure it was through Ethan Hawke. I had been hanging out at the Naked Angels Theatre bringing my early work to be read, which is how I first met Ethan. 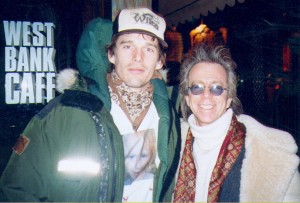 Jeffrey Gurian of Comedy Matters TV with Ethan Hawke back in 2005 during his performance in Hurly-Burly!

I had written a play called “A Punch In The Face”, and was going to their Monday night reading series where you could get up and coming actors to read your stuff out loud. The purpose was for writers to evaluate their writing and make changes after hearing it read.

I was doing readings of ” A Punch In The Face” and a young actor who introduced himself as Ethan Hawke came over to tell me he really liked my piece. I had just read about him that very week in people Magazine about a movie he starred in called ” Alive” about people who survived a plane crash.

The Naked Angels was made up of Marisa Tomei, Matthew Broderick, Kenny Lonergan, Fisher Stevens, Sarah Jessica Parker, her brothers Toby and Pippin, and a host of others that have become household names. Somewhere along the way Ethan introduced me to Peter.

I was offered the opportunity to make some short comedy films for the Toyota Comedy Festival, and had about two weeks to get them done from start to finish, and I created what came to be known as The “Men Who” Series, based on a series of ideas I had told to Woody Allen many years before when I was still in Dental School. It was about men who did very unusual things, like ” Men Who Take A Pitchfork To The Movies”, “Men Who Enjoy Latin Dancing With Tools”, and “Men Who Dance Where They’re Not Supposed To”! 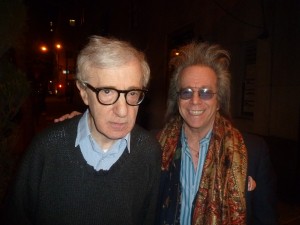 Jeffrey Gurian of Comedy Matters TV with Woody Allen many years later in 2011!

In recent years when I re-connected with Woody Allen, as I was about to be re-introduced, I actually made him bust out laughing by saying, “Hi Woody, I’m a very close friend of yours!”

Anyway, back to The “Men Who” Series, … I cast them myself and when it came time to cast “Men Who Dance Where They’re Not Supposed To” I went to Peter Dinklage who kindly agreed to be in the film. He was one of three men who danced in the street wherever they wanted to, despite the fact that there were “No Dancing” signs posted everywhere.

I had my artist make up a perfect “No Dancing” sign that looked just like a “No Parking” sign and even had hours on it. I think it said, ” No Dancing Tues, and Thursdays or any other time!” We shot it on Broadway and 28th Street, where I also shot ” Men Who Dance In Traffic With The Sunday Edition of The New York Times!” 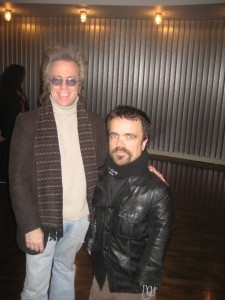 When the shoot was over, we accidentally left the sign up, and it created quite a traffic jam for a few days, because even then parking was very difficult in the city and drivers who were looking for a place to park found it very confusing to come up against a “No Dancing” sign. It even wound up as a Page 6 item in the NY Post!

Anyway, Peter was always a very talented actor so I’m not really surprised that he went on to become such a big star. I loved him in the award-winning film “The Station Agent” in which he starred with his good friend, the amazingly talented Bobby Cannavale from Boardwalk Empire, and in about 15 minutes the new season of “Game of Thrones” is coming on and I’m running to watch. 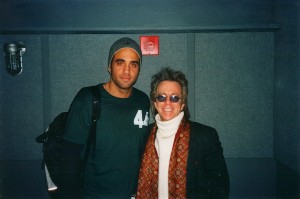 Jeffrey Gurian of Comedy Matters TV with Bobby Cannavale at The Acorn Theatre on Theatre Row in NYC!

Check out below to see Peter dance where he’s not supposed to, … in a “No Dancing” zone!