If you were around in the 70’s, 1973-1979 to be exact, then you were aware of Jimmy “J.J.” Walker who played J.J. Evans in the Norman Lear, CBS hit “Good Times”, with Esther Rolle who played JJ’s mom Florida Evans, and John Amos who played his dad Michael Evans. 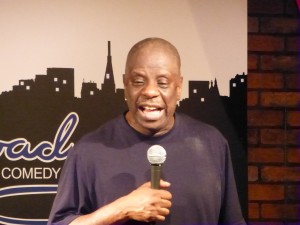 JImmy “J.J” Walker onstage at Broadway Comedy Club without a floppy hat, but making one of his signature faces!

At the time that JJ was on the show he played so much younger than he actually was that John Amos who played his Dad was only 8 years older than him!

JJ’s signature phrase was “Dyn-O-Mite!” which follows him to this day. And in my interview with him recently at Broadway Comedy Club where he showed up with his agent and my old friend Roger Paul, he said he was grateful for that tag, “Dyn-O-Mite”! Very few performers have something that sticks for so long. Like Rodney Dangerfield will always be associated with the phrase “No Respect.” In comedy having an identity like that is magical!

The main room downstairs was packed, wall to wall, and JJ went up on stage and knocked it out of the park. He talked about the economy being so bad that when you rent an apartment they want the first month’s rent and the last month’s rent. JJ was like, ” I wasn’t even here last month! Why do I gotta pay that guy’s rent?” 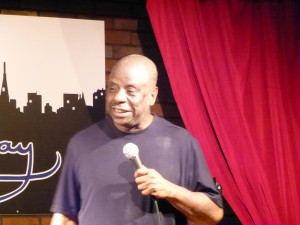 In talking about doing drug testing of post office employees, he said, “The one drug you won’t find is speed!”

And in talking about crime, he told of a 21 year old man who tried to rob a Toys ‘R Us with a toy gun. He was shot by a 5 year old with a real gun!

And he said, ” As crowded as jails are these days, they always seem to have room for Black people!”

He was just filled with funny lines. He said that Kim Kardashian is like Kryptonite for Black men, and that they tried to do a Real Housewives of San Francisco, but they couldn’t find any.

He even acted out scenes from a fictional Maury Povich show where the Black characters were named what sounded to me like Aquaneshia and Tyquarius, and he called “Cops” a Black reality show with a three tattoo minimum and a 4 tooth maximum.

I was so glad to see him being so funny after all these years. And he was so kind to his audience. He stayed afterwards to greet people who wanted to take photos and buy his merchandise. 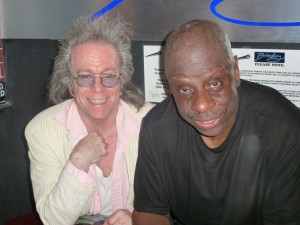 It just goes to show you that being funny is like riding a bike. You never lose it, and if you fall off the end of the stage you get right back up and start telling jokes again!

Check out the cool video interview we did after the show!