Jeffrey Gurian’s Excellent Adventure with Keith and The Girl

If someone told you you had to go on the radio for an hour and 40 minutes straight you might wonder to yourself if you had enough to say. On today’s Keith and The Girl appearance after almost two hours we were just warming up! I swear we could have gone another two hours easy! The flow was amazing and they are extremely gracious hosts! 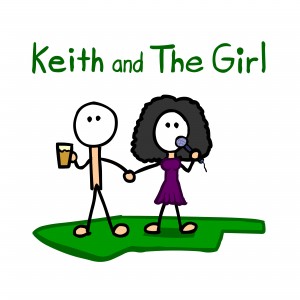 The very descriptive and accurate logo for “Keith and The Girl”, (whose name is Chemda, btw!) This happens to be exactly what they look like! (JK!)

My curiousity was piqued last month when I attended a couple of nights of their 8th anniversary celebration which they held out in Brooklyn at a performance space called White Wave. They literally had fans fly in from all over the world. Right around me were people from Australia, Toronto, Europe, Colorado, California, and all of them had gone to great trouble and expense to come in and celebrate with KATG! 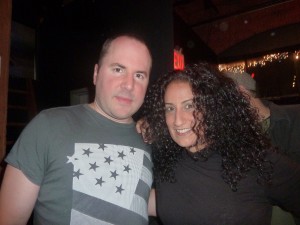 Keith and Chemda in a very accurate portrayal of what they REALLY look like, during their 8th anniversary celebration!

People like Ted Alexandro say I know everyone in comedy.

So I was embarrassed to admit that KATG had escaped my comedy radar. And for eight years??? How could that even happen? That’s when I made it my business to find out more about KATG, and I’m so glad I did.

They have a super studio in Queens, whose exact location will not be divulged. Suffice it to say that it’s hidden inside of a mountain and when you approach and yell out a secret word, which they give you before you arrive, the mountain actually splits open, and you walk in, like Moses parting The Red Sea! It’s incredible. 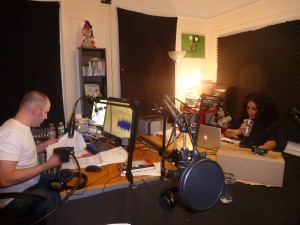 A candid shot of Keith and Chemda in the studio, getting ready to do the KATG podcast and videocast as well!

I started out strong when they asked me my favorite movie and I said “The Sixth Sense.” It seems that was Keith’s favorite movie as well and no one else had ever said that. Then they were both ready to fall out of their chairs when I told them my favorite color was orange, which also happened to be Keith’s favorite color. And anyone who knows me knows that’s true. It’s the color of The Second Chakra and a very powerful color.

We went on to talk about everything. We talked about my new book, “Make ‘Em Laugh”, about the 35 year history of The Comic Strip, comedy legends like Andy Kaufman, Jack Rollins, and Milton Berle, young stars not with us anymore like Patrice O’Neal, Mitch Hedberg, Mike DeStefano, Greg Giraldo, movies, music, Healing which was an amazing discussion where we found out that Chemda has Healing energy, and she thinks she’d like to use it! 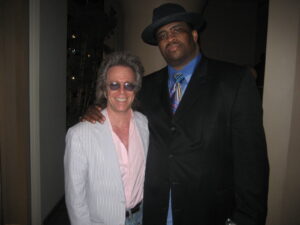 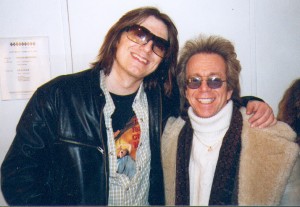 Jeffrey Gurian of Comedy Matters TV with the late Mitch Hedberg at one of his last performances in NYC! 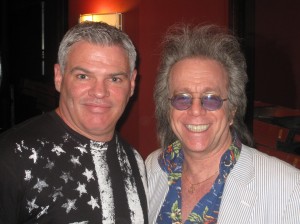 Jeffrey Gurian of Comedy Matters TV with the late Mike DeStefano after he was on Last Comic Standing! 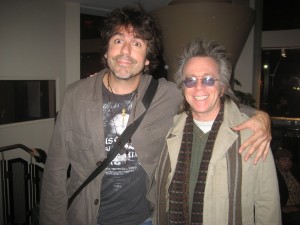 Jeffrey Gurian of Comedy Matters TV with the late Greg Giraldo at a party at Comix in NYC!

We talked about the comedy clubs and gave shout-outs to The Comic Strip, Gotham Comedy Club, and The Comedy Cellar. We talked about high school, and about how and why kids are so mean to each other, dating, sexuality, and almost every subject on the planet, and we had lots of laughs and a really good time.

We even talked about You Pop the new social media craze that’s sweeping the country where creative people can get paid for making cool little videos on their cell phones and uploading them to the YouPop.com site to be offered to the world at large! 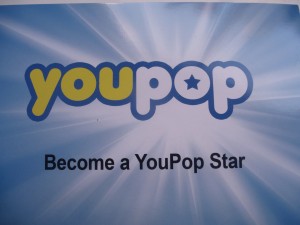 You Pop, the most exciting social media craze to come along since Facebook!

To show you just what a good time we had, I didn’t check my e-mail even once during the two hours! It flew by so fast, I couldn’t believe it when Chemda told me how much time had gone by. Then I got the tour of the premises and got to see Lauren again, Chemda’s significant other, plus I got to see the office where they keep their merch and it’s loaded with goodies, except it’s lighter now cause they gave me a whole bunch of presents. 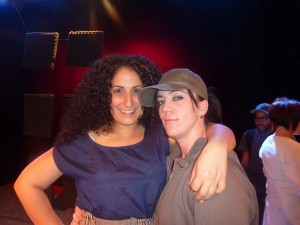 Chemda and Lauren at the 8th anniversary of KATG!

They gave me audio books that you wear on your wrist like a bracelet. I never even saw something like that. I’m not Bill Gates but I’m familiar with lots of technology, and this was really cool. It’s like a thumb drive and you get the book as an MP3.

I got their books, “The Great American Novel” by Keith, and “What Do We Do Now” a modern advice book for modern couples written by both of them. And I had to once again give them props for having been a couple, broken up, and still working together with such a cool dynamic. They are truly good friends. It’s a testament to what people can accomplish if they really want to. 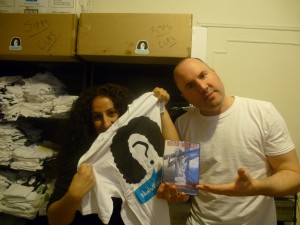 Chemda hiding behind one of the KATG T-shirts while Keith proudly displays his “State of the Union” DVD.

But that’s not all, I also got Keith’s “State of the Union” DVD, and the Keith and The Girl Roast, with cartoon drawings on the back of some of the comics who participated and who you can actually recognize! One I’m sure is Mike Lawrence because the character has a huge beard!

They called my segment ” Healing Hands”, and you can actually listen to the whole thing right here:

I really hope they invite me back! 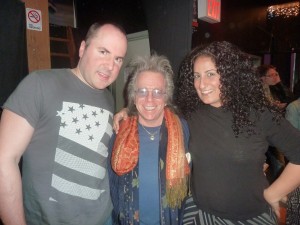