Kelly Cutrone is a powerhouse! How do I know? Aside from the fact that I count her as a dear friend, and know her for many years, she managed to wind up on Page 6 two days in a row, about the same story. No one does that! (LOL) It’s hard enough to get on Page 6 at all, but to have two stories back to back? Only Kelly Cutrone could do that! 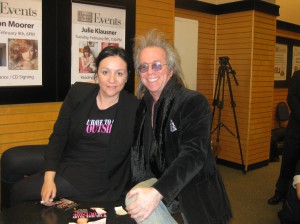 Jeffrey Gurian of Comedy Matters TV with Kelly Cutrone at the Barnes and Noble book signing for her hit book ” If You Have To Cry, Go Outside.”

On Tuesday, 9/27/11 the first story ran, entitled “Diva Swap” saying that ” Sources close to the catwalk competition say Vogue editor-at-large André Leon Talley will exit Tyra Banks’ hit series America’s Next Top Model, after its 17th season wraps, and Kelly Cutrone may take his place.” Cutrone’s people had no comment on that, nor did Talley’s people, nor the CW’s people. Nobody’s people were talking!

Kelly is the head of the hot fashion P.R. firm People’s Revolution, and when she arranged for me to attend the shows at Fashion Week that she was in charge of, it was very clear that she runs everything with a tight fist! Kelly doesn’t mince words when she’s on the grind! And people jump to do her bidding.

She’s had a lot of TV experience, including her run on MTV’s The Hills which led to her starring in the spinoff, ” The City”, and finally as the star of her own show on Bravo, ” Kell On Earth”, which she also Exec. Produced!

The very next day, another Page 6 item came out entitled ” Andre’s All Good” in which Andre says there are ho hard feelings about him leaving the show, that it was mutual, and that he had a fabulous time while he was on. They like to refer to Kelly as “tough-talking” which fits her TV image, but she’s always been very kind to me.

I recall my first trip out to LA many years ago. Kelly made one phone call, and got me a super room at an even better price at the Sunset Marquis hotel in Hollywood. Then when I was out there she hooked me up with lots of fun events to make me feel at home, like I was in New York!

I remember the event she created that really put her in the public eye. Many years ago, she produced a show in NYC, in an art gallery, and the show was called ” Love, Spit, Love”. It was basically naked couples in various intimate poses within an art gallery setting. Live art, if you will! And lots of people did! I remember being there as her guest and there were tons of cops, and police barricades to try and control the huge crowds that had come to try and get in.

She mentions that event as a monumental event in her career in her hit Harper One book ” If You Have To Cry, Go Outside”, which chronicles how she overcame the often difficult and challenging events in her life that led up to the success she enjoys now. 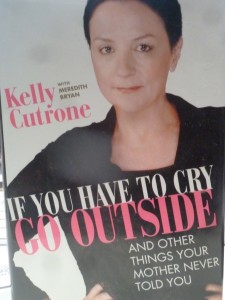 Kelly Cutrone’s hit book, ” If You Have To Cry, Go Outside” published by Harper One!”

I was at the book signing for that event, and I came away with one of the most special pieces of memorabilia in my whole long career. When Kelly signed my book she wrote: “Dearest Jeffrey,
You are a legend! I worship you!

And under that was a big Heart, and then her name “Kelly.” And if you don’t believe me, here it is! 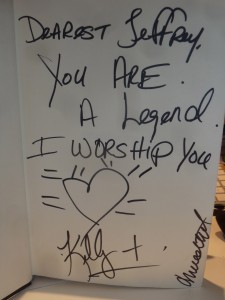 No caption is needed! This photo speaks for itself! (LOL)

So I along with millions of other people will be watching for Kelly on ANTM, and rooting for her continued success!