Chris Rock Rocks in The Motherf**ker With The Hat

Chris Rock made his Broadway debut in a hard-hitting and fantastic new show with one of the strangest names ever to hit Broadway, The Motherf**ker With The Hat. 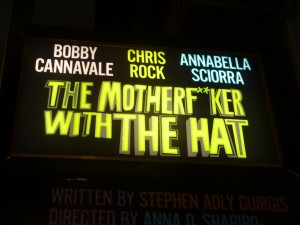 The Schoenfeld Theatre Marquee for The Motherf**ker With The Hat starring Bobby Cannavale, Chris Rock, and Annabella Sciorra

What’s particularly funny to me as a comedy writer and something I’ve thought about since The Vagina Monologues came out, is that as a writer you can call your work anything you want, and people HAVE to say it if they want to either buy it or see it.

Before The Vagina Monologues, no one used the word “vagina” in regular conversation.  It felt too weird.  As a matter of fact, when I saw it, the next day my mother asked me what play I saw the night before, and I felt so uncomfortable I told her I didn’t remember.  She said ” How can’t you remember?  You just saw it last night!”

And that’s when I realized I would rather my mother thought I had brain damage than that I knew the word “vagina.”

Anyway, this play was superb.  it’s only in previews so by the time it opens officially it will supposedly be even better although I don’t see how that can happen.  Now I’m not a critic, so I look at a performance as to whether I enjoyed it or not.

I don’t notice things that critics tend to notice.  When I use a camera, I leave it on “Auto”.  If I can see the picture I think it’s a good camera.  When people rave about audio systems, it means nothing to me.  If I turn on my CD player, and I can hear the song, and it sounds good to me, that’s all I need to know.

I don’t know about the bass, the treble, and all that other stuff.  All I need to know is that I can hear the song clearly enough to tell it from another song,and I’m good to go! 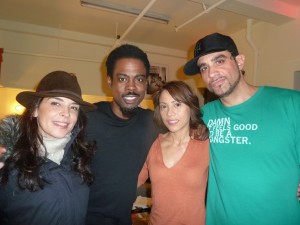 That being said, this cast is superb.  Every one of them is a shining star.  Chris Rock plays a guy named Ralph who’s the A.A. sponsor of a career criminal named Jackie, fresh out of jail, and trying to stay sober and do the right thing, played by the incredible Bobby Cannavale.

Even if you knew Bobby Cannavale personally, ( which I did), you would NEVER recognize him in this role. He actually changed physically, and looks like a completely different person. I’ve met him a few times over the years, and even looking at his photo I have to struggle to see that it’s him.

He used his talent to morph into a Puerto Rican or Dominican drug addict from The Bronx, who walks, talks, looks and sounds the part.

It’s not even acting.  He BECOMES that person.  He reminds me of my friend Cipha Sounds, the highly successful and talented non-drug addict radio DJ who does the morning show on Hot 97, Cipha Sounds and Rosenberg, and who IS a Puerto Rican from The Bronx.

Over the years, I had met Bobby several times through my friends Ethan Hawke and Peter Dinklage, with whom he starred in the Academy Award nominated picture “The Station Agent”, but I think he must have worked out hard physically for this part as well as having learned the script.

His body is “cut”, but even his face is cut.  And he mastered the facial expressions, and even the hand motions of the kind of guy he’s playing.  In the photos we took after the show, he’s throwing some kind of street hand signs, … but doing it right! Bobby’s Dad is Italian and his Mom is Cuban, so he probably gets a great tan during the summer!

Chris Rock acts like he’s been on a Broadway stage all his life.  It’s his first show but he’s been on stages all over the world, so it didn’t intimidate him at all.

I went to the show with Richie Tienken, the owner and co-founder of the legendary comedy club The Comic Strip.  Richie discovered Eddie Murphy and went on to manage him for 11 years and in 1986 they jointly discovered Chris Rock, so Chris is always happy to see Richie.

Watch the little interview I did with Chris backstage after the show.  Richie is in it as is Chris’ friend, hilarious comic Ardie Fuqua, who happened to sit right near us in the audience.

On the way up the 6 flights of stairs to Chris’ dressing room, ( and I’m not kidding about that!) we ran into the rest of the cast and brought them with us to take the photos you’re seeing here.

Annabella Sciorra has been a favorite of mine since The Sopranos.  She’s so talented and plays the long suffering wife of Ralph, Chris Rock’s character, in this, her Broadway debut as well.

She was running home to take care of her kids but was kind enough to come upstairs for a group photo for Comedy Matters, and that’s why she was wearing her hat and coat! 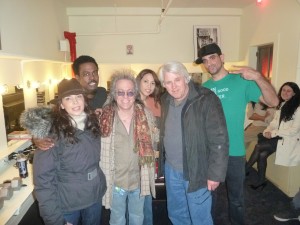 Chris plays a guy so cold he actually tells a guy in detail how he’s been with his girlfriend and when I say in detail, I mean “IN DETAIL”!  It was COLD, bro’!

I meant to ask Chris what that was like, even doing that on stage, cause most people could never do something like that in real life, but I didn’t get a chance to.  I plan on seeing the show again, so maybe I’ll get to ask him that next time.

So much of acting is learning to detach from self-consciousnessm so you can be free to do what you have to onstage.

Another actor making his Broadway debut, who wasn’t with us backstage is Yul Vazquez, a very talented actor who played such an unusual character called ” Cousin Julio”. He plays kind of like a gay Jean-Claude Van Damme character who is very ready to “throw down” at any moment, to stand up for his cousin Jackie, played by Cannavale.

Yul is the co-artistic director and founding member of the LAByrinth Theater Company of which Cannavale, Elizabeth Rodriguez, who plays Victoria, Jackie’s girlfriend, and writer Stephen Adly Guirgis are all members.

Gurguis who is a brilliant writer is the other co-artistic director of the LAByrinth Theater Company.

I saved Elizabeth Rodriguez for last, because I wanted to give myself enough room to praise her. (LOL) She’s done lots of theatre and television, with recurring roles on NY Undercover, The Shield, and All My Children, besides numerous roles on other shows.  She’s also been in films like “Miami Vice”, “Jack Goes Boating”, and “Acts of Worship”.

Even more amazing to me, a day or two after I met her I found out she’s the next door neighbor of my dear friend Mary Elizabeth, who just happened to call and excitedly ask me if I heard about this play, telling me her friend and neighbor Elizabeth is in it.  I’m like ” Elizabeth Rodriguez?”  That can’t even happen!

Obviously, while growing up,  she met many girls like the one she portrayed, and so have we all, but it’s one thing to meet them, and another thing to be able to bring them to life on the stage.   This girl is AMAZING, and sexy in a very subtle way.  She makes it very easy to fall for her character, who is tough as nails on the surface, but really just wants to be loved like everyone else. I plan to do a separate interview with Elizabeth in an upcoming posting, so stay tuned!

All in all this is a play not to be missed!