I’ve met lots and lots of stars in my day, but none more exciting, and adorable than Aubrey Anderson-Emmons, who got on my lap almost as soon as I met her! Not because I’m that good with women, but because she’s only 4 years old! I have the pleasure of being good friends with her Dad, Kent Emmons who started All Comedy Radio, and headed up National Lampoon Radio for a while, and is now heavy into creating infomercials with his company Kent Direct! 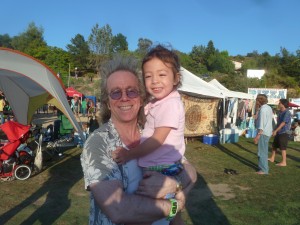 When I told Kent I was coming out to LA last month to perform and also to interview Billy Crystal and Russell Peters, he insisted that I stay at his home in Westlake Village, and I’m so glad I did. Kent is the kind of host that makes you feel at home right away. And he and his assistant Sarah made sure I felt like part of the family for my whole stay!

As part of the family, I got to meet little Aubrey. I had met her before but it was when she was just born. I was out in LA with my new book at the time, “Filthy, Funny, and Totally Offensive”, which was based on my writings for the famed Friars Roasts for many years, and Kent was kind enough to make me a book party at his home in the Hollywood Hills. It was a great party and Budd Friedman, the father of comedy clubs was there, as was uber-literary agent Peter Miller, and Hollywood starlet and dear friend Kali Hawk, among others. Kali, by the way, is gorgeous and talented, and will be HUGE, and I’m glad to say I know her for a loooooong time !!! 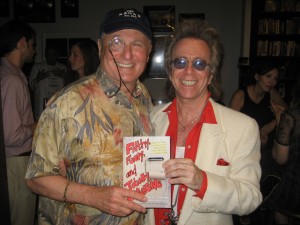 Comedy Legend Budd Friedman of Improv fame at the party that Kent Emmons made for Jeffrey Gurian's book "Filthy, Funny, and Totally Offensive." 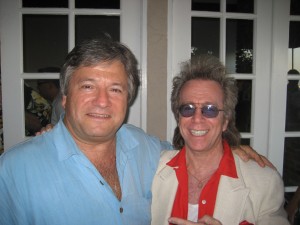 Jeffrey Gurian with the gorgeous and talented actress Kali Hawk at Kent Emmons' part for Jeffrey's book, " Filthy, Funny, and Totally Offensive" with the favorite nasty jokes of 250 celebs!

Anyway, I think Aubrey had been born about a week before I arrived, and I felt badly for her mom, comic Amy Anderson who really didn’t need house company at a time like that. I did my best not to cause any trouble! (LOL)

This time, I got to see Aubrey all grown up! What a beautiful, happy, well-adjusted child! Her parents must be doing something right. Her personality is that of a 12 year old, but she’s so loving and adorable, and accomplished. I got to spend quite a bit of time with her, and at the time I was there, we knew she was up for the role of Lily, on Modern Family, replacing the twins Jaden and Ella Hiller, but we didn’t know she got the role yet! 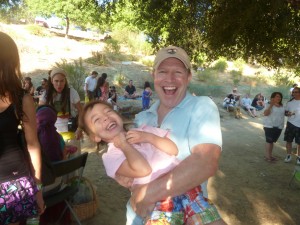 Kent Emmons and his beautiful daughter Aubrey, having the best time at a Reggae Festival!

We all went all over together and we even went to a Reggae Festival with internet master Adam Gilad, because the Reggae Festival was being produced by his son Amit, who I had also met when he was just a kid! All of a sudden he has a beard, and is producing music festivals! What happened??? 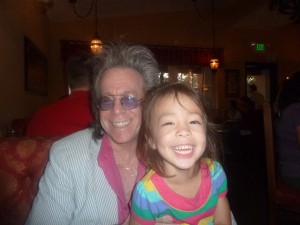 Jeffrey Gurian having a laugh with TV star Aubrey Anderson-Emmons over dinner in a Mexican restaurant!

Anyway, I just got the good news from her Dad, and Aubrey was all over the trades this week. This is a cool article on her in Entertainment Weekly!
AubreyEntWeekly

We wish her so much luck on her debut when the show returns on Sept. 21st. I already got an invite to return and stay with Kent, but I hope Aubrey doesn’t get so famous that she won’t wanna hang out with her uncle Jeffrey! (LOL)

Coincidentally, while I was in Montreal recently at the Just For Laughs Festival, I got a great little interview with Steve Levitan the creator and writer of Modern Family. You can check that out right here: