On almost any night of the week you can find a great show at Broadway Comedy Club. Sometimes I just drop by unexpectedly and have yet to be disappointed! The last night I went Monroe Martin was MC’ing the show. 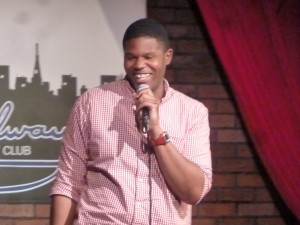 He said he should never be working with kids because he looks like a huge child! And he does. He said if you detach his head from the rest of his body, he’s actually adorable! (I’m sure he didn’t mean to decapitate himself, cause that couldn’t be cute no matter who you are! LOL)

I had never seen Rich Aronowich before since he’s from Cali, but he’s really funny and the audience thought so too! He does a lot of physical humor, like his impression of a muppet running, plus sound effects, and crazy voices and faces, and it all works. 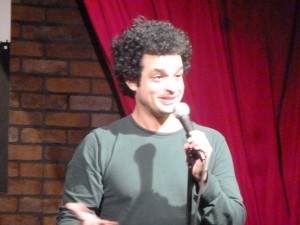 Rich Aronovich, Screech, or Horshack onstage at Broadway Comedy Club! All three of them did well!

Talking about internet dating he mentioned his favorite site, www.yourgonnadiealone.com. I liked his take on why he hates musicals! ” I don’t wanna pay $85. to hear every thought I ever had in song!” Exactly the reason why I hate musicals too!

He said he looked like either Screech or Arnold Horshack and again the audience likes when comics make fun of their own appearance!

Bryan Scott McFadden is so used to getting thunderous applause I don’t even think it phases him anymore. His character work is superb, like when he imitates the old fighters at the gym. Fantastic. 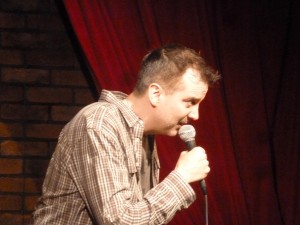 I liked his new bit about every job should have an MC to announce you when you get to work. And he told one couple they were sitting there staring like an Amish Village at Radio Shack!

Laurie Parmenteri was also very funny. I had also never seen her before. Her writing is very sharp and her jokes are succinct. She said she started birth control. Once a month she throws herself down a flight of stairs. 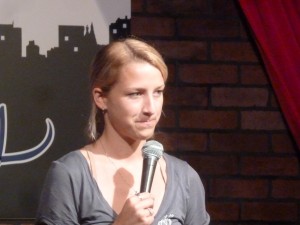 She said she was against abortion except in a case of emergency, like if SHE got pregnant! She also said she never got an abortion, but asked the audience not to tell her boyfriend because she already spent the money!

Kyle Grooms is another killer act. He said in Detroit you can buy a house for five dollars. Detroit is doing so bad, Haiti is throwing a benefit for them! I love when he talks about growing up in the hood with a name like Kyle. No one would ever be scared if they heard that Kyle was looking for them! “Kyle? That ni***r with the glasses??? Hysterical.

And his Barack Obama impression is so right on, I think Kyle should run for President! 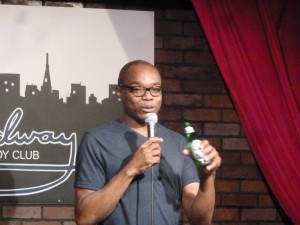 And who better to end a killer show than Mike Vecchione? (That’s a redundant question, meaning it needs no answer! It answers itself!) Mike says that women love doctors so he wears a stethoscope on the subway.

He also has sex like he performs CPR, 15 thrusts, two breaths and then he checks for a pulse. 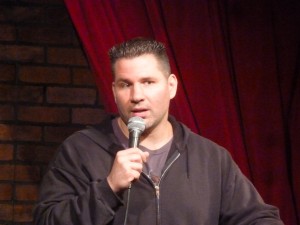 Mike Vecchione doing what he does best, onstage at Broadway Comedy Club!

Mike is a smoker, and when people tell him that smoking is bad and that every cigarette takes 7 minutes off your life he tells them that if their conversation goes on another 30 seconds he’s gonna kill himself anyway, so it won’t matter!

And before I knew it I laughed so much that the show was over! It’s that way every time!