They say that beautiful women can’t be funny! Who “they” are no one actually knows, but whoever “they” are, Lynne Koplitz disproves that myth. 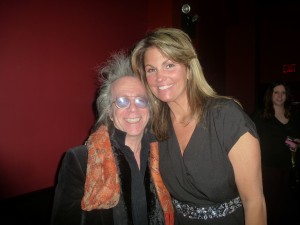 The beautiful, sexy, and funny Lynne Koplitz with Jeffrey Gurian of Comedy Matters TV at Gotham Comedy Club in NYC!

She also did a very brave thing. At least I thought it was brave. She was headlining Gotham Comedy Club, and taping her show to be used for an upcoming project, and with her manager Rick Dorfman in the audience, one of the top comedy managers in the biz, (who also works with JB Smoove), she decided to go off on her own, and not do the act she had been preparing to do.

It was the first show of her weekend headlining gig, and instead of doing her prepared material, she did what I compared to a Patrice O’Neal type of performance, which she thanked me for. She said I got what she was doing.

She was looking for truth, and talked to the audience about all kinds of things, mostly about getting older, and the state of her life. It was very ballsy, and I had to give her props for that. She even said about herself, “This stripper is chatty!” 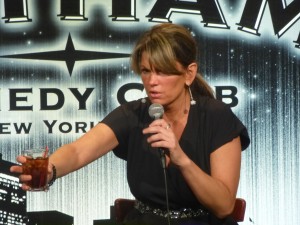 Lynne Koplitz onstage at Gotham offering an audience member a sip of her drink!

The last time I had seen her was this past summer in Montreal in the lobby of the Hyatt Hotel, where I interviewed her for my Comedy Matters TV channel, which was chosen as the official celeb interviewer at the festival. She was nursing a broken shoe, which she also attributed as part of her hooker look! It’s about 31 minutes and 58 seconds in!

I’m sure the rest of her shows were her regular material but only someone who has performed before an audience knows how hard it is to perform at all, and then to get up and do something you didn’t expect to do makes it all that much harder. She’s a courageous performer to do something like that.

Jimmy Failla was the MC and is always reliably funny, and a great host. One of the lines that stuck out for me is that he wanted a child who would be friendly to other children, so he named his son Sandusky! 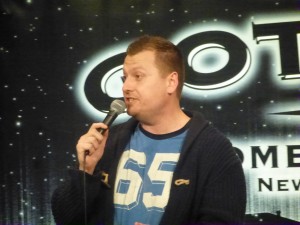 Ryan Hamilton gave a stand-out performance, and got huge laughs. Starting from the moment he walked out on stage. Before he even said a word!

Only in comedy are we happy when people laugh at our appearance. Performers use it as a prop. Not like a Gallagher or Carrot Top prop that you have to pull out of a suitcase, but a prop you always have with you! Your face!!! 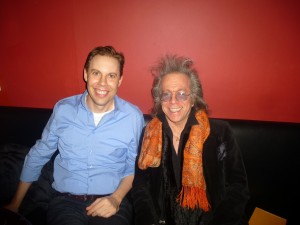 Audiences always like when comics tell them who they look like. With me it’s a cross between Phil Spector and Elton John. Ryan says he looks like a comedy club logo. And because of that he can’t even go to a funeral. It wouldn’t be appropriate! (LOL) 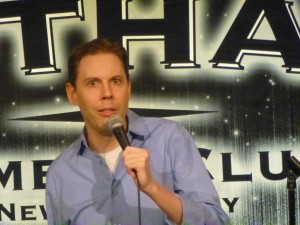 Ryan Hamilton onstage, describing himself as looking like the logo for a comedy club!

He did a fantastic bit on hot air ballooning, about taking a girl up in a hot air balloon on a date. You have to go early, like 5 A.M. and it takes two hours which means you’re finished at 7 A.M. Not a particularly romantic time of the day!

He described it as a romantic experience with a guy standing in the corner. In a thing made of wicker. Wicker makes him nervous even on the ground.

And the guy who flies it calls himself a pilot! Ryan felt that was a very generous term to use. The guy doesn’t even know where we’re going! Do you wanna go up or down??? (LOL) Those are your two choices!

He also said he went out with a girl he knew from the 3rd grade who suggested they pick up where they left off, so he pulled her hair, and ran away!

Another great show at Gotham!