My Take On Bullying

Bullying seems to be a hot topic these days.  Not a day goes by when you don’t read an article in the paper about the effects of bullying, from a student committing suicide to a school shooting blamed on the shooter having been bullied.   What is it about us as human beings that causes us to be bullies?

The dictionary defines “bully” as “a person who is habitually cruel or overbearing, especially to smaller or weaker people.”  That makes sense until you consider that last October, of 2013, football player Jonathan Martin, at 6’5 and 300 plus pounds, walked away from his team for being bullied by teammate Richie Incognito.  If a 6’5″ 300 pound guy can be bullied I guess that ANYONE can be bullied!

And Incognito’s explanation mirrors what all bullies say, “I was just kidding around!”   He went on to say ” Jonathan’s lawyer says he experienced “a malicious personal attack,” but again, that’s because he doesn’t understand how our locker room relationship was. We’d carry on. We’re big, physical guys. I would put my hands on him, just messing around. Like head-butting. Give him a belly shot. Normal stuff, that’s all.”

We’re “big, physical guys?”  Is that an excuse for acting like a moron?   You get a pass based on your physical size?  Why does your size allow you to head butt someone?  Is that really a game?  That’s not even allowed in some forms of MMA, because it can be so damaging.  “A belly shot?”  I’ve always known that that’s how those guys think, but to hear them actually say it is still shocking to me.

Former Jets quarterback Vinny Testaverde talked about “bullying” and “hazing” of new players, and what goes on in the locker rooms, in an article in the NY Post, and said “When Chad Pennington was a rookie with the Jets, we made him wear his helmet to breakfast, lunch and dinner in the cafeteria one day.  That was kind of our prank or joke on him to welcome him into the NFL.”  Now MY question is what would have happened if you had just said ” Welcome to the NFL, we’re really glad to have you.”  Would he have been disappointed?  Would he have felt unwelcome?  Would he have felt like ” Boy I really wish they had done something mean to me, or at least made me look stupid!”

In all honesty I experienced the same “Jock” mentality entering Dental School!  And all these years later I still can’t figure out why.  It should have been a great honor to be accepted to a professional school and the doctors on staff should theoretically have gone out of their way to make the students feel that way.  Instead they did everything in their power to humiliate us, demean us, and take away any amount of self-esteem we might have had.

I was bullied from my very first day when the Dean made a speech to “welcome” the incoming students and said, ” We don’t want any hippies with guitars here.  If you want to be a hippy with a guitar go to Dental School in California!”  Then a certain Dr. Lantz , with a Pennsylvania Dutch accent, came over to me and told me to get a haircut, and continued telling me that for the next four years,  until literally the very  day he handed me my diploma.  As I approached the podium to receive my D.D.S. degree after four grueling years of work, all he could manage to say was ” Gurian, get a haircut!”

And if you saw the length of my hair in those days you’d know they were out of their minds.  I also had grown a moustache which was in style in New York in those days and that really threw them over the edge.  In those days in Philadelphia, if you wore a turtleneck sweater you were considered a radical, … an anarchist!  I was not allowed to see patients for three whole weeks which put me in danger of not being able to complete my clinic requirements, and therefore not be able to graduate.

Because I grew a moustache I was told by my faculty advisor that I was “a disgrace to the profession.”   Meanwhile the halls bore the paintings of the school’s founders all of whom had huge mutton chop whiskers and plenty of facial hair.

The only saving grace was that Dr. Lantz and Dr. Mingeldorff ( I’m not kidding, that was his name!), who actually had a Confederate flag in his office that said ” The South will rise again” found out that my father had served in World War II.   And the way they found out was because my Dad had come down to Philly for me to do some work on his teeth and to speak to them about not letting me in the clinic, and they refused to let me work on my own father, until he had a talk with them and it came out that he had been in the O.S.S. ( Officer’s Strategic Service).  Dr. Lantz’s exact words which were seared into my brain were, ” Your Dad served us well in World War II.”

That still didn’t get me back in the clinic but they did let me work on my father, since he had driven down from New York City to see me.  My Dad told them that he didn’t feel he could tell me how to look because I was almost a doctor. It took my mother buying me a wig, with short hair and a part, in order for them to allow me to see patients again.  And I had to appear in Dr. Mingeldorff’s office , and slowly turn in a circle so that he could examine my hair from every angle.  He seemed to have no idea that it was a wig, because several weeks later, he showed his true nature by telling me it was time to get a haircut again because my “hair” was once again getting too long! 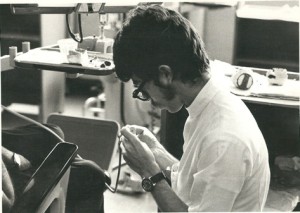 This was the length hair that got me banned from Dental School, and forced me to resort to wearing a wig in order to graduate!

The bullying in Dental School got so bad that in the class where we were being taught how to give injections in the mouth, I was in the middle of giving an injection to a patient over the upper front teeth.  I was doing my best to make it painless. The needle was already into the gum, and some moron instructor came by and said to me, “Put it in further, don’t be afraid”,  and he actually pushed my elbow so that the needle went in too far.  I remember the horror of that till this day, and if it happened now he would have been fired.  In those days we were too afraid to speak up.  Today I would have.

The torment I faced for those four years definitely changed me as a person.  I know it and I try and fight it on a daily basis.  To be openly humiliated by the very people you’re trying your hardest to join , is not something you ever forget.  I wrote on my apartment walls with crayon that they would NEVER break me.  I told myself that I would have the last laugh, and I did.  I had a very successful practice and I never participated in any of the alumni events or had anything to do with the school , or any of the other students, since the day I graduated.

I’ve been bullied throughout my life.  By construction workers who didn’t like long hair when it started back in the 60’s.  By random strangers who’d make remarks to me on the street about my appearance!  By neighborhood gangs growing up in The Bronx!  By powerless insignificant people who Tweet mean things to make themselves feel important.  I know how it feels to be made to feel like you don’t fit in.

Fortunately the entertainment world is a lot more inclusive.  They are used to free thinkers, and encourage that as it’s a sign of your creativity.  When you go into the Army the first thing they do is to shave off your hair because your hair is a symbol of your identity, and they don’t want you to have your own identity.  They want everyone to be the same.  Crosby, Stills, and Nash said it best a long time ago when they advised, “Let your freak flag fly!”   To this day if I hear them sing “Almost Cut My Hair” it can still bring tears to my eyes.  That’s how much I was bullied about my appearance.

In recent weeks a 10 year old Brooklyn boy ran away and rode the subways all night to try and escape the constant bullying he experienced at school.  He was terrified to ride the trains all night alone, but it was preferable to the terror he experienced daily being bullied.  The NY Post reported that a  6′ tall high school female senior had her face slashed with a razor, just two weeks before graduation,  for the audacity of being pretty enough to be a model.   Where she went to school that was enough to deserve a slashed face.  She already had a promising modeling career that was cut short by the jealousy of a bully that attended her school.  She said they made fun of her for her height, but she tried not to let it get to her.  She was the only model in her school.

And another football player at Rutgers has accused one of the coaches of bullying him, which is the same school where men’s basketball coach Mike Rice was fired for bullying HIS players. The sporting field seems to be ripe with bullying since lots of sports guys have that same “jock mentality” I mentioned above, that belittles anyone without the right genetics.   Too many people take credit for their genetics, when it was really just a roll of the dice.

If you were ever one of the kids who got picked last when other kids chose up teams, you know the feeling.  I was considered a popular kid, and played a lot of different sports, but I often felt left out.

And the media bullies people too, as evidenced by the NY Post headline of May 7, 2014 about Monica Lewinsky, who is still trying to make a life for herself after being humiliated on a worldwide basis for being seduced by the President of the United States.  The headline read “After 10 years Monica breaks her silence”, and then it said “My life sucks” as if she said that.  I read the article.  Nowhere does she use the term “sucks.”  The clever press person who came up with the title thought it would be cute to continue the humiliation, while the guy who seduced her goes on to ignore an impeachment and is looked at as some great hero who makes millions of dollars giving speeches.

Bullying is bad enough when you’re a kid,  but you’re supposed to outgrow it.  When you’re still bullying people as an adult maybe you’re just sick and need help!