Posted by Jeffrey Gurian on November 9, 2012

For the past 9 years Caroline Hirsch, owner and founder of Carolines Comedy Club has put together the NY Comedy Festival, a festival of gigantic talent and impressive proportions. I alternate between calling her “The Queen of NY Comedy” and the “First Lady of NY Comedy”, both titles of which she is deserving, for having Carolines Comedy Club thriving in NYC, and providing A-list entertainment for over 30 years. 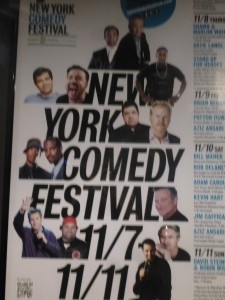 The star-studded New York Comedy Festival takes over NYC for 5 days and nights!

The festival is made up of the biggest stars performing in the biggest venues, like Ricky Gervais at Town Hall,Kevin Hart at Madison Square Garden for two shows on Saturday, 11/10, Marlon and Shawn Wayans at Carolines for several shows throughout the festival, Denis Leary at the Paley Center for Media, Artie Lange at Town Hall in a show called ” Too Fat To Die”, Adam Carolla’s “Not Taco Bell Material” at Town Hall, and in a brilliant bit of casting, Jim Gaffigan, the whitest man in comedy, at The Apollo up in Harlem!

These are just some of the shows being offered. There are many more in many other venues, twenty-four altogether. I sat down with Caroline for a fun video interview which should be up very shortly, but we had a chance to reminisce about all of her clubs, which I’ve been going to since she opened in 1981. That club was in a small space on 26th Street and 8th Avenue, where she hired Jay Leno as the first comic to be booked there. 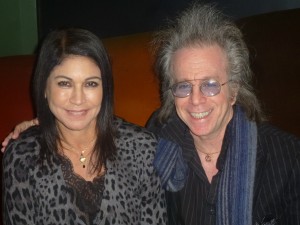 Jeffrey Gurian of Comedy Matters TV at Carolines on Broadway, with Caroline Hirsch, owner and founder of the NY Comedy Festival!

I don’t remember much of my life, but for some reason I remember very clearly seeing both Jerry Seinfeld and Paul Reiser there, before either of them were known, and being so impressed with them both, that I offered to introduce them to comedy manager David Jonas who at the time was managing Freddie Prinze, and went on to get him ” Chico and the Man!”

I had been introduced years earlier to David by award-winning writer/director/producer Alan Zweibel, when Alan and I first met up at SNL in the early days, although when I first met Alan he wasn’t any of those aforementioned things yet! But it was David that got me started as a comedy writer for great comics like Dick Capri and Freddie Roman. 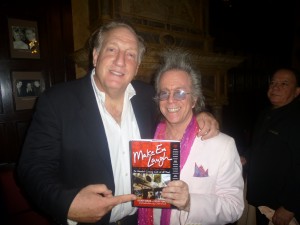 Alan was a comedy writer on the show, and was playing handball on the walls of the SNL offices with Neil Levy, a cousin of Lorne Michaels, and Neil was also a producer on the show at the time!

Caroline closed her 26th Street location in 1987, when she opened her magnificent South Street Seaport location, and that’s where Jon Stewart got his start as an opening act. He even did children’s parties on Saturdays, and Caroline thinks she remembers him wearing a cape.

Then after five years at that location, in 1992 Caroline opened in her current location on 50th and Broadway, a beautiful room that probably holds 300 people or more, and is usually packed whenever I go. Now it’s called “Carolines on Broadway!”

And it’s run by old, old friend Louis Faranda, who I go back with to the days when he was a bartender at Catch A Rising Star. Louis and I also got a chance to reminisce about old times, and I got to tell him that he’s in my book ” Make ‘Em Laugh” in the Chris Rock story, of how he encouraged a 19 year old Chris to call Eddie Murphy after Eddie had given him his number. Chris was too nervous to call until he ran into Louis who said something to the effect, “Schmuck, if Eddie Murphy gives you his number call him!” 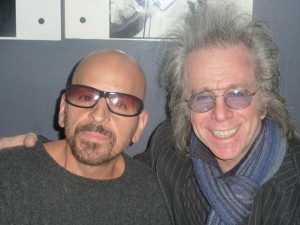 Jeffrey Gurian of Comedy Matters TV in a rare photo with old friend Louis Faranda at Carolines on Broadway, the club he runs so well!

One NY Comedy Festival event in particular that I’m excited about is “Stand Up For Heroes” at The Beacon Theatre, whose red carpet I’ll be covering tonight. It’s a benefit for the Bob Woodruff Foundation, a non-profit organization dedicated to investing in national and community-based programs that connect our troops to the help they need— from individual needs like physical accommodations, job training, financial counseling, to larger social issues like homelessness and suicide prevention; educating the public about the needs of service members returning from war; and collaborating with key federal, state, and local experts to identify and solve issues related to the successful return of service members from combat to civilian life.

On that show and hopefully on the red carpet escorting injured servicemen will be Mike Birbiglia, (who kindly gave me a great blurb for the back cover of my new book with Chris Rock called “Make ‘Em Laugh”),Ricky Gervais, Patton Oswalt, Bruce Springsteen, Jon Stewart, Robin Williams, John Mayer and Roger Waters. 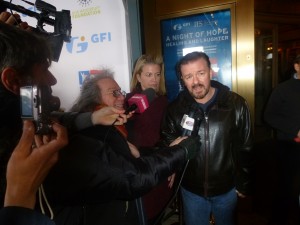 Sneak peek of Jeffrey Gurian of Comedy Matters TV interviewing Ricky Gervais on the red carpet of Stand Up For Heroes at The Beacon Theatre!

I’m also excited about the prospect of seeing my good friend, style expert Ann Caruso, who worked with her best friend, and style expert Mary Alice Stephenson to style both the wives of the wounded warriors and some of the female warriors who were wounded as well and will be attending the event! It should be a spectacular evening!

For more info on the festival and the schedule of events please go to http://www.nycomedyfestival.com There’s almost 90 shows in 24 different venues!