Cult Comedy Pictures Is On The Move!!!

Every so often I come across someone who’s doing something really different or has what I consider to be extraordinary talent. Such is the case with a group called “Cult Comedy Pictures.”

It’s a whole gang of guys, who mix their skills both behind and in front of the camera to come up with some very funny short videos!

And if you don’t believe me see for yourself! 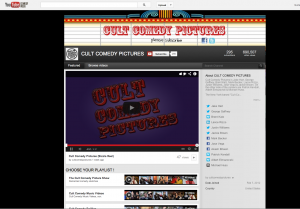 Cult Comedy Pictures has a channel on you Tube!

The troupe is made up of Lance Rizzo, George Gaffney, Jake Hart, Brent Katz, Justin Williams, Jackie Brown, Mark Baker, Jose Vega, Akash Bhasin, Patrick Kendall, Albert Elmazovski, and Michael Huss, and they call in other actors (male and female) to play parts in scripts that they write. 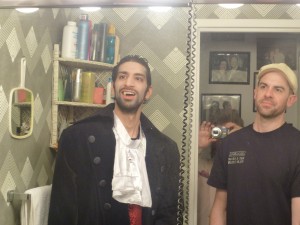 Lance Rizzo helping Akash Bhasin as Count Hackula put on his make-up and fangs! You can figure out for yourselves which one is Lance Rizzo! (LOL)

I had the good fortune to be in one of them, and playing myself again as I’ve been doing a lot lately on things like Comedy Central’s hit “Kroll Show” in a sketch with Nick Kroll and John Mulaney, and in a red carpet scene in John Gallagher’s new film called “Act, Naturally.”

I’m actually heading out to LA next week to shoot yet another Kroll Show episode where I will also be playing myself on the red carpet***. (***Note that I said “playing myself” not “playing WITH myself!” LOLOL)

The Cult Comedy Pictures video was kind of a faux documentary, written by George Gaffney, about a hack comic who goes by the name of “Count Hackula” played perfectly by Akash Bhasin, a comedian of Indian descent, who really nailed the Transylvanian accent of Count Hackula. He had a fantastic costume complete with fangs, one of which kept slipping off during the shooting and made for a lot of laughs! 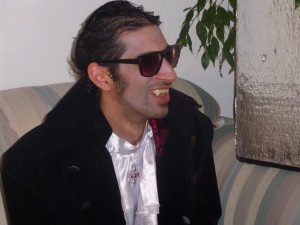 Akash Bhasin in character as Count Hackula, unable to hide his fangs as he sings his cover of the old Bob Hope favorite, ” Fangs For The Memories!”

Hackula’s been around for centuries and never bothered to even write one new line. My job was to interview him as I do for Comedy Matters TV and we shot the thing in my place in Manhattan. My “main squeeze” was with me and was played by the lovely and talented Brianna Dunphy who is also an accomplished burlesque dancer! 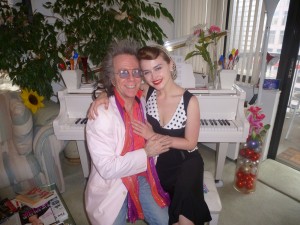 Jeffrey Gurian of Comedy Matters TV with his Cult Comedy Pictures “girlfriend” Brianna Hurley on the set of ” Count Hackula!”

They shot us on the couch and then lounging in bed, which is where I do some of my best work! (LOL) 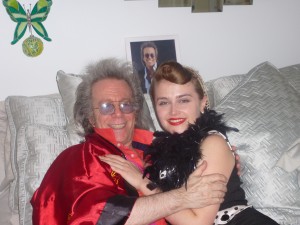 Jeffrey Gurian of Comedy Matters TV with Brianna Hurley “in bed” under a photo of Jeffrey!

When I asked Count Hackula if in all the centuries that’s he’s been performing he ever even had representation, he laughed and said ” Agents and managers, … they’re all bloodsuckers!” 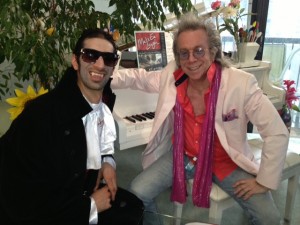 Jeffrey Gurian of Comedy Matters TV interviewing hack comic known as Count Hackula at the piano where Hackula was tickling the ivories!

Cult Comedy came in with a crew and very sophisticated equipment, by the standards of most of the shoots I’ve seen. Everyone was very dedicated to their craft, and George Gaffney who is also a performer, wrote the script, but was very cool about letting the actors improvise, which often makes for a better product.

This day he spent lots of time on the computer writing and re-writing to get the script just where we wanted it. 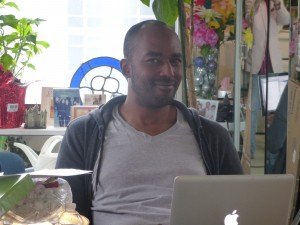 Co-founder of Cult Comedy Pictures George Gaffney who’s often “on the mic” but this time is “on the Mac!” 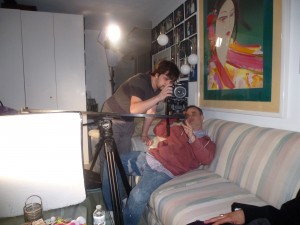 Albert Elmazovski and Brent Katz working hard to line up a shot, so as not to have to move my piano! 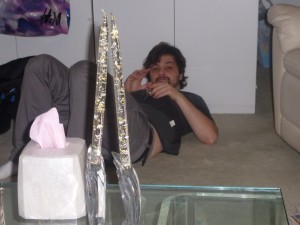 Albert using his own special technique for lining up a shot through the palm of his hand while semi-propped up on the floor! 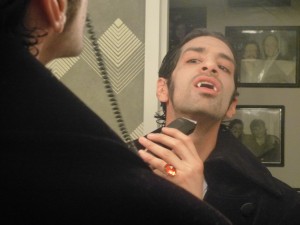 Akash Bhasin showing his dedication to Cult Comedy Pictures by shaving off his beard for the role of Count Hackula, without even knowing where he could get another one! Now that’s dedication!

Everyone had patience galore which is what you need on one of these things, and we shot from morning to night so that we could get it all done in time for the live show coming up at The Duplex on Saturday, June 8th at 7 P.M. 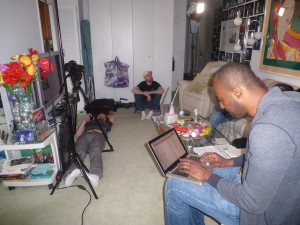 Using the downtime wisely, George Gaffney writing and re-writing, Lance Rizzo checking out the location and Albert Elmazovski trying out his new “lying under the tripod technique” to get better sound!

I’m proud to say I will also be in that show, and am coming back from LA early just to be in it! I believe in these guys, and think they have something very cool, very different, and very hip to offer! Plus we had a blast as you might be able to tell from some of these photos.

Special thanks to Albert and Brent for their spectacular audio and visual work! 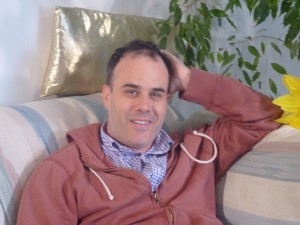 Brent Katz chillin’ on the couch between takes!

I can’t wait to see the finished product and also to attend and perform in the live show coming up on Saturday, June 8th, at 7 P.M. at The Duplex on Christopher Street, (http://www.theduplex.com) 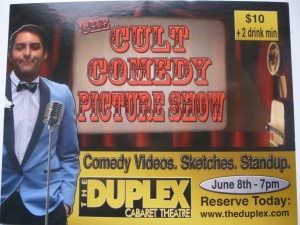 Invite for live show on Saturday, June 8th at The Duplex! Come on down and join us!

Posted in: Celeb Photos, Comedians In The News

I had only seen Tom Segura perform once, cause he’s an LA guy, so I went down to catch him headlining at Gotham, and I was glad I did. He’s really funny, which is a big plus when you’re in comedy! I can’t emphasize it enough, how important that is! (LOL) 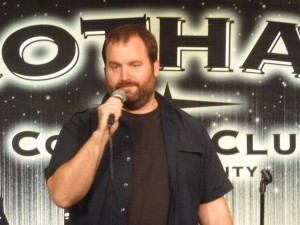 I was very glad to see Marion Grodin MC’ing the show. She’s really great and a consummate pro! 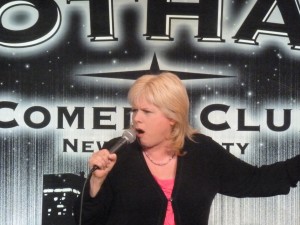 Marion Grodin making a point while MC’ing the Tom Segura show at Gotham!

Marion used to produce shows all over town, sometimes with Danny Cohen down at The Duplex, on 7th Avenue, and always invited me to perform, except in those days I wasn’t as experienced as I am now, and was often reluctant to go up on big shows. 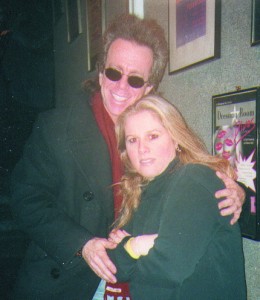 Marion Grodin and Jeffrey Gurian down at The Duplex in 2001!

I remember one in particular with Adam Ferrara at the old Gotham. I agonized over whether to do it or not, and wound up not going up. I wish she was producing shows now, cause now I’m ready for anything! (LOL) 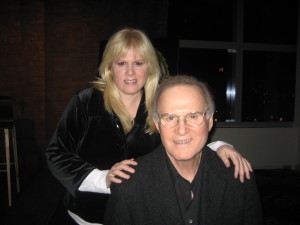 Marion Grodin with her Dad, the legendary Charles Grodin!

Marion was followed by Wali Collins, which as I’m writing it sounds very weird. He followed her on stage, not like on the street, like a stalker or something. What I meant to say was that he was the next act. Wali is always enjoyable and a real crowd pleaser.

He talked about unusual inventions like a toilet that makes turkey sandwiches, and a shoe that’s also a plane. It reminded me of my own inventions, like the 24 hour stapler, where when most staplers stop working at midnight, my stapler works 24/7, … and the battery operated beard, which took the beard-wearing world by storm! 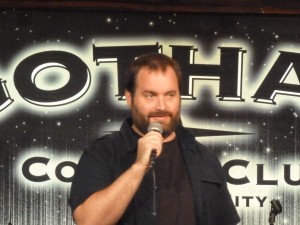 He said sex is the only thing he’s been doing so long that he’s not better at. He generally ends every session by saying “I’m sorry!”

And he talked about his cousin who’s so dumb, that they went out to eat and he ordered a jerk chicken and his cousin said, ” Oh man, I wanted to order that!” in a very disappointed tone. So Tom explained, ” Well go ahead. You still can. We’re in a restaurant. I didn’t order the last one!