The Phenomenon Known as "Keith and the Girl"

Ted Alexandro says I know everyone in comedy and that everyone knows me.

Richie Tienken owner and founder of The Comic Strip says I’m like the James Lipton of comedy. So imagine how embarrassed I felt not to be familiar with a comedy podcast phenomenon known as Keith and the Girl, currently celebrating 8 years of longevity! 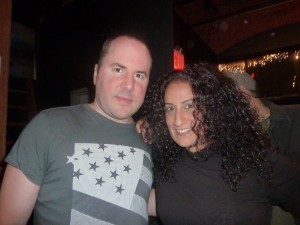 Keith Malley and Chemda, better known as “Keith and The Girl!”

Keith and The Girl, began on March 7, 2005, and is made up of comedian Keith Malley and “The Girl”, who is Chemda Khalili. Chemda told me she doesn’t mind being referred to as “The Girl” since “Chemda” is a hard name for some people to say! (Not for me cause I’m one of “the tribe!” LOL)

Luckily their publicist Meredith Trotter thought to invite me to this weeklong 8th anniversary celebration of their podcast which gets over 1 million dowmloads a month and has an international following. (I’m not exaggerating about that!)

I hardly ever leave Manhattan with all the shows there are here to write about, but for KATG I drove out to White Wave, a very cool space on Jay Street in Brooklyn just to experience what KATG was all about. And I’m really glad I did!

I didn’t get to see the actual podcast but I attended two of the shows that made up their weeklong celebration, and then went to an after-party that they had for their fans in a special KATG space in a huge building across the street.

The last show was very special because it was Keith’s birthday and every year he records a new DVD of his comedy material. This year he did a compilation set of what he considered to be his best material culled from the last ten years of performing, but he attempted to do it all “clean” which he managed to do, … 99%! (LOL) 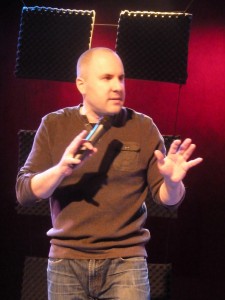 Keith in an animated pose during his stand-up set onstage at White Wave in Brooklyn!

Plus it was Chemda’s actual stand-up debut and I didn’t want to miss that. 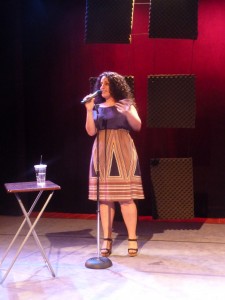 Chemda making her stand-up comedy debut at the final show of the 8th anniversary celebration of “Keith and The Girl”!

A very funny guy named Tim Dimond (pronounced “Diamond”) was the MC and everyone seemed to know him so I guess he’s a regular part of the show. He has a deep, resonant voice which he claimed did not go with his “anorexic-looking” body! Only in comedy do we have the benefit of using self-deprecating humor. We say things about ourselves before other people do!

Dan Soder was up next, and he’s always sharp and creative. I related to his line, “You can tell by my lack of facial hair that I’m from Queens!” Because everyone from Brooklyn looks like a farmer from the 1800’s with a full brush beard. They all look like “The Unibomber”. Like a guy who lives alone in a cabin in the woods and just cones out once in a while to tell a few jokes and then goes right back in to his cabin! 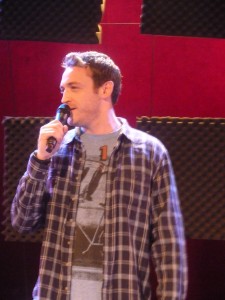 A clean shaven Dan Soder killing it for the KATG crowd!

They would all be perfect for my “Beard Painting” story in Weekly World News, ” Man Paints Replica of the Cistine Chapel With His Beard!” You need a Mike Lawrence type of beard for that. A Myq Kaplan kind of beard just won’t cut it! (Myq and John F. O’Donnell were two of the very funny comics I caught on the KATG show the night before, and I got there late, but I did happen to see Mike Lawrence in the background somewhere.) 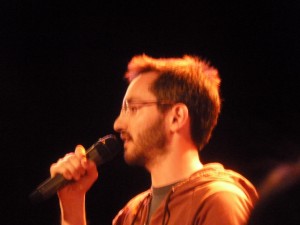 Myq Kaplan at KATG, with a beard fit for many things but not “beard painting!” 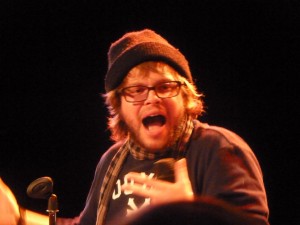 John F. O’Donnell onstage at KATG with his own version of hipster facial hair, but not enough to actually paint with!

Dan also talked about how the current generation of kids would be when they take over the army. Everyone is allergic to Gluten! In 20 years he predicts our army will be in bad shape. “I WOULD storm the beach, but I have an allergy to shellfish!” (LOL)

So I drove out to Brooklyn two nights in a row and it was really worth it to me. I found it very exciting to see what was going on that I didn’t know about and how people actually traveled in from all over the world to celebrate with Keith and Chemda.

I spoke to one girl from Toronto named Mia who credited Chemda for giving her the courage to come out about her sexuality, and another girl and guy who traveled in from Colorado who are also rabid fans of the show. But that’s nothing. People actually traveled in all the way from Australia, and several other countries to attend and hang out with Keith and Chemda because they are totally accessible to their fans and audience.

That was one of the things that people said that I spoke to. They were not elitist and were very real, and made themselves accessible to their fans.

Chemda told me they have their own studio and record five days a week. Their next episode is this coming Wednessday, 4/17/13 at 2 P.M. You can find them on i-Tunes.

In the show, usually lasting an hour or more, Keith and Chemda discuss their lives and current events in a humorous and very honest, upfront, unedited fashion. The show’s tagline is “Keith and his ex-girlfriend talk shit”. They were once in a relationship which I think says a lot about them, that they could continue to work together after no longer being involved.

Keith now has a “fiance”, who Chemda told me had been a fan of the show, and Chemda introduced me to her significant other, a girl named Lauren who identifies herself proudly as a “transgender” individual. She was even kind enough to explain the difference to me between transgender and transsexual!

Chemda and her significan other Lauren! (I don’t know whether she identifies as bf or gf, and I forgot to ask!! LOL)

Keith and The Girl has consistently ranked in the top ten podcasts at Podcast Alley, and has also received multiple podcast-specific awards. The hosts have been interviewed by other popular podcasts such as WTF with Marc Maron, Never Not Funny, and many others, and I am excited to say that I have been asked to come on as a guest. 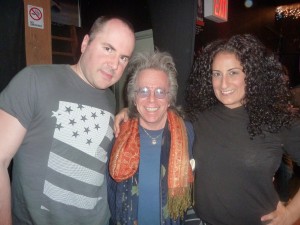 I’ll let you all know when that’s scheduled to happen! In the meantime tune in to Keith and The Girl just like I’m gonna do! I’m already a fan!