Onassis The Sketch Troupe Not the Dead Billionaire

I recently had the opportunity to experience a performance by an 11 member sketch troupe with the unlikely name “Onassis.” When I asked how they chose the name this is the answer I got : “It’s a handsome name on its own and has a regal connotation, but also conjures up subtly horrific images and the idea of a dark past.” Just what I would have guessed!

Most of the time I’m afraid to see sketch troupes, especially if I know someone in the troupe, because I find it very hard to tell them it was a great show, if I didn’t enjoy it, and unless it’s Monty-Pythonesque in style, which is the only way I can describe the fantasy-type sketches I enjoy, I usually come away feeling disappointed. Not so with Onassis! 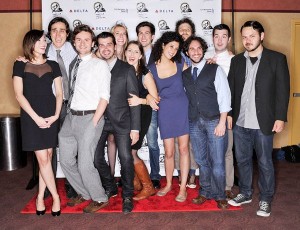 Sketches are easy to get into but very hard to get out of, comedically speaking that is! There’s lots of funny premises, but the endings mostly fall flat as far as I’m concerned, … and no one really knows how far that is! LOL Again, not so with Onassis. I actually asked them afterwards if they minded being compared favoritively to the Pythons and they said they were flattered. Who wouldn’t be? LOL

Onassis is the house sketch team for The Upright Citizens Brigade Theatre, and they premiered a film as part of the Friars Club Comedy Film Festival, at the Clearview Cinema in Chelsea. One of my assistants, Corinne Fisher turned me on to Onassis, as she is connected to the troupe through one of the members Frank Hejl.

Debuting in January 2011 Onassis has gone on to win acclaim as one of the best sketch teams in New York City and was awarded the FrISC Sketch Comedy title at the Friars Club Improv + Sketch Competition in June 2011. Along with the award came a prize of $5,000 to commission a short film for the annual Friars Club Comedy Film Festival, which is the film I got to see!

The film is serving as a pilot episode of an upcoming Onassis sketch TV series. I would definitely watch this!

Click here to see the Onassis interview with Jeffrey Gurian of Comedy Matters TV! It was one against eleven, but I think it worked out okay! (LOL)

And make sure to go and see their next live show this coming Monday, 11/14/11 at 9:30 P.M. at the UCB Theatre in Chelsea.
You can find out more about Onassis online at:
Facebook.com/OnassisComedy
Twitter.com/OnassisComedy