Those in the know love Ted Alexandro. The man is just so clever. I’m in awe of Ted’s delivery. I was laughing with him about it the other night. If he was any more relaxed onstage he’d pull up his blanket and go to sleep! 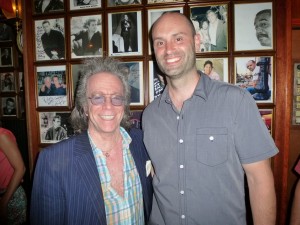 Ted Alexandro with Jeffrey Gurian of Comedy Matters TV at The Comic Strip with Ted’s photo peeking out over his left shoulder!! Coincidence? No one actually knows!

Sometimes he pauses so long, I wonder, ” Will the man ever speak again?” And he makes it work, because it’s who he is. Most comics, me included are afraid of the silence. Ted welcomes it! He has no fear! He knows his stuff is funny, and you’ll just have to wait for it until he decides to share it with you! (LOL)

It’s a sign of supreme confidence, and I always admire that in a person! On top of that Ted is a super nice guy! I was happy to see such a packed crowd for him at Gotham. His reputation must have preceeded him, because the main room at Gotham is pretty big, and it was full.

Sherry Davey was the host, and the audience not only loves her material, but they love her English accent. Her business card says,”I’m not Mary Poppins” and believe me she isn’t! Mary Poppins would have passed away if she heard some of the language that Sherry uses so elegantly in her act! It all sounds good with an English accent! 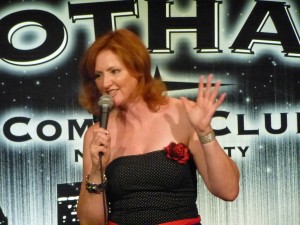 I couldn’t believe her youngest child is 9 already, because I remember very clearly going to watch her perform downtown when she was still with the late Marty Fischer, and she was pregnant. So that was ten years ago! That’s crazy! 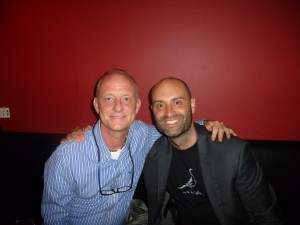 He also said he had more money in high school than he does now! Buddy Fitzpatrick is a reliably funny act. He always brings it!

Mike Yard is another dependably funny act. His style goes well with Ted Alexandro. Very laid back and relaxed! It’s a product of many years of stage time. 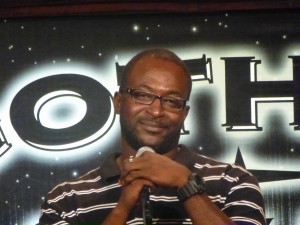 Mike Yard doing his thing onstage at Gotham Comedy Club! He has such an angelic look he makes Kyle Grooms look gangsta!

And when Ted took the stage he spent the first few minutes on a guy in the audience who was facing away from the stage. The guy took the time to get good seats and then sat not facing the stage. And Ted milked it for every laugh, and there were plenty!

He even did something I had never seen him do before! He imitated a Walkman slowing down when it needed batteries, while singing the song “Don’t Stop Believing.” It was very funny.

He wondered why Classical music has no song titles, but yet they do tell you the key it was written in, as if you were planning to play along at home! (LOL)

He also says he would never hit a woman, but he’s been provoked to the point where he says to himself, ” This is where some guys would hit a woman!”

And when he talks about the term “sexual preference” I think it’s one of his most clever lines. He says he doesn’t believe in the term sexual preference, as if it’s a true preference. He explains it like this, ” I prefer direct flights, but if there’s a layover somewhere and that’s the only flight available, I’ll still take the flight. But if I book a flight to “Vagina”, and they intend to make a stopover in “Men’s Ass” I’m cancelling the trip!” That is hysterical!

And I don’t know what’s funnier, the thought of having two cities called “Vagina” and “Men’s Ass” or the creativity to put those two thoughts together in a sentence!

And on a joke that didn’t get the response he expected he said,”That joke’s not for everybody. Just think of it like the specials in a restaurant. You don’t have to order them, but you do have to listen to them!”

And that’s why Ted Alexandro gets a packed room! Cause he’s that good!

P.S. Ted has also been opening for Craig Ferguson lately, and touring parts of the country with him on a huge tour bus! They’ve been in places like Phoenix, Tucson, California, and San Diego, and sometimes drive all night to get to their next destination. Since they’re both kind of low-key guys, Ted says instead of sex, drugs and rock and roll, it’s more like naps, multi-vitamins, and light reading! He’ll be performing on Craig’s show this month!