Tracy Morgan On Road To Recovery

Anyone who knows my posts knows I only like to write about positive things.  I’ve been holding off on writing about the horrible accident that injured Tracy Morgan, and his fellow-comic passengers Ardie Fuqua, Harris Stanton, and Jimmy Mack who unfortunately did not survive.   I didn’t know Jimmy personally but from mutual friends I  heard he was a great guy and that Tracy considered him his mentor.

It’s a very different thing writing about someone you know.  Especially when it’s something terrible.  Most journalists write very dispassionately never having met the people they’re writing about.  Writing about a friend is much more difficult in many ways, because you never want to feel that you’re trying to draw attention to yourself, through their misfortune. 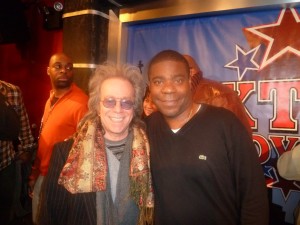 With Tracy Morgan in happier days at Gotham Comedy Club!

I saw Tracy as recently as April 15th when he came up to Sirius XM studios to do a special ” Unmasked” interview with Ron Bennington, the “Ron” from the legendary Ron and Fez Show.  Everyone was excited and Tracy did a very moving and intimate interview, really opening up about his life, and the things that are important to him, and moving both himself and the audience to tears!   I was in the green room watching, and after the interview there were big hugs all around!

The shocking news came through on Saturday, June 7th that Tracy was in critical condition after a tractor trailer slammed into his SUV limo bringing him and his entourage back from performing at a casino in Delaware.

The limo Tracy was in turned over, and Tracy was said to have sustained several injuries including a broken femur, a broken nose and several broken ribs.  He already underwent surgery for the broken femur , and was said to be recovering, at Robert Wood Johnson Hospital in New Brunswick.

Fortunately Harris Stanton got away with relatively minor injuries if you can call any injury “minor”,  and was well enough to be released. 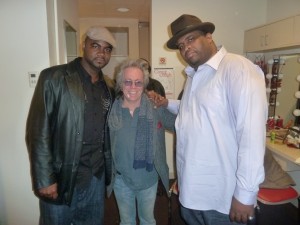 Harris Stanton, Jeffrey Gurian, and Patrice O’Neal at the taping of Patrice’s last special “Elephant In The Room!”

Ardie who has been opening for Tracy for a while now, is still listed in critical condition, and to my knowledge no one has said anything  specific about his injuries.  I last heard from him the Wednesday before the accident, when he texted me all excited that Chris Rock himself had brought him on to the BET Awards.

Ardie is a super guy, loved by all who know him, who’s still recovering from the loss of his beloved son Ardley Jamaal Fuqua in May of 2012 in a freak accident, but he still manages to go out and make other people laugh despite his own personal pain.   He teased me for weeks about the fact that when I went out to Brooklyn a few months back to see him open for Tracy , I brought Tracy a copy of my book “Make ‘Em Laugh” as a gift, and signed it for him on the spot.  Tracy had known about the book, and I promised him a copy but for some reason Ardie thought it was hysterical that I would think to give Tracy a signed copy of my book!  I’m still not sure why he thought it was strange, but he did!  And he told that to everyone he saw when I was around! (LOL) 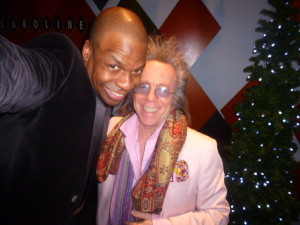 Ardie Fuqua and Jeffrey Gurian in an Ardie-taken selfie at Carolines! His arms are REALLY long so they come out good!

Also seriously injured were Tracy’s assistant Jeffrey Millea, and there were supposedly two other people in the limo that were not injured.  Thank G-d Tracy’s wife Megan, and 11 month old baby daughter  Maven were not in the SUV as they usually travel with Tracy, and are there at every recent show of Tracy’s that I’ve attended.

Everyone, especially his friends in the comedy community are all praying for their swift and complete recovery!