Andy Kaufman was one of the most unusual, most talented, most creative comics ever to hit the stage. He left us too young, but his memory certainly lives on. Manager/producer Wayne Rada, produced the 7th Annual Andy Kaufman Awards at Gotham Comedy Club and I spent two nights there watching the semi-finals and then the finals. 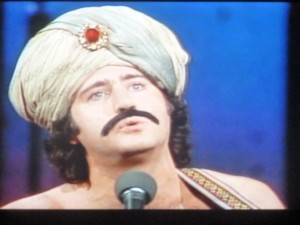 Andy Kaufman performing on the Johnny Carson Tonight Show wearing a turban, while singing a Slim Whitman song, “My Rosemarie”!

Contestants are not supposed to try and copy Andy, as if anybody could, but they are supposed to try and capture the essence of his spirit and creativity. He had no fear in doing what he thought was funny, whether it was wrestling women, or real wrestlers, or coming out on the Carson show in a turban and diaper singing a Slim Whitman song. 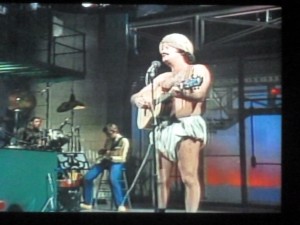 Andy Kaufman had the courage to come out on stage dressed in a diaper and turban to perform on The Tonight Show with Johnny Carson!

On the first night the judges were Rory Albanese, a very funny comic in his own right, but more importantly the producer of The Daily Show! To me, that’s more impressive than even being Jon Stewart! You get to produce one of the most popular shows on the air! 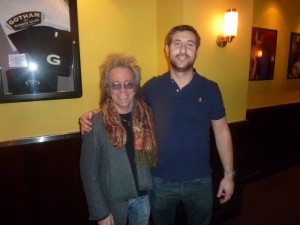 Jeffrey Gurian of Comedy Matters TV with comic/producer Rory Albanese, the producer of The Daily Show! How’s THAT for a credit?

I was so glad to see Rory. I had been waiting over a year to tell him how funny he was in the South Beach Comedy Festival last year. I had never seen him perform before and he was absolutely hilarious! I wasn’t able to find him after the show, but the good thing is that it’s never too late to give someone a compliment. He didn’t complain and say, ” Why did you wait more than a year to tell me?” He was a perfect gentleman and just said ” Thank you!”

Then there was Comedy Central executive Anne Harris, who always extends herself to come out and be helpful at these type of events, joined by previous Andy Kaufman winner and Comedy Central darling Kristen Schaal, and lastly Andy’s younger brother, ( by 2 years), Michael Kaufman. 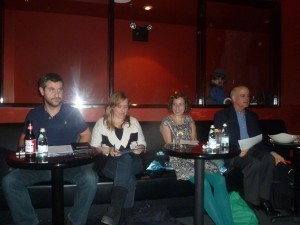 I remember going the year that Reggie Watts won and I actually met Andy’s Dad who was there with George Shapiro of Shapiro/West. ( Seinfeld’s manager! You knew it sounded familiar right??? LOL I have to find that video somewhere!) Reggie was actually the guest performer on the next night for the finals. 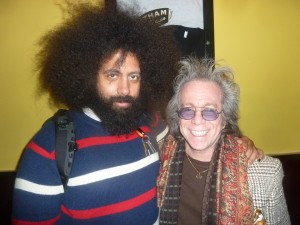 Jeffrey Gurian of Comedy Matters TV with Reggie Watts at Gotham for the Andy Kaufman Awards!

The first night there must have been at least 15 semi-finalists. Some of them tried to reach Andy’s level of creativity by dressing very strange in outlandish costumes and several chose a stage personna. I snapped photos of a few I thought were funny and entertaining.

First there were the “Nice Brothers”, who both wore shades, and punctuated their repartee with the word “Nice” every so often. I liked them. 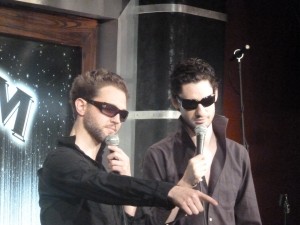 Then there was Mike Amato who came out and sang a song like he was one of the Ratpack, or maybe Perry Como, if you even know who that was, then ripped of his clothes and became a stone cold rapper, with two hot dancing girls. I thought he was good. 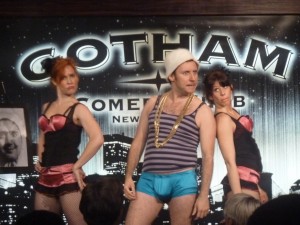 Mike Amato and his dancing girls! I wish I knew their names but I don’t!

Then there was Dave Thunder who came out as a character named Jimmy DeLuca, a Lower East Side kind of kid who told a very scary story while eating a piece of cheese. And every so often he broke into that “scary” voice that camp counselors would use when telling a scary story to campers on an overnight in the woods. I thought he was funny too! I actually laughed out loud! 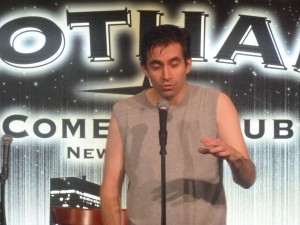 It just goes to show you how subjective comedy is cause none of those people won. The next night for the finals, Harrison Greenbaum was the host. He’s always hilarious! 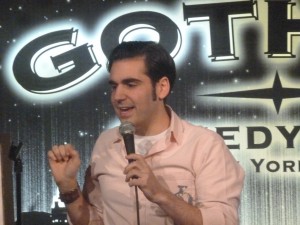 The winner was a guy named Nick Vatterott, who must have gotten permission to have the longest set of anyone else on the show. Every other performer got about 5 minutes. Nick left the stage and kept coming back because his act consisted of screaming obscenities at the audience and threatening to never come back again, except he had to keep returning cause he forgot his keys, or a couple of milk containers, and each time he came back he’d “interrupt” the show, and scream again. He screamed right into the faces of people in the audience. And I mean SCREAMED! With all of his might!

I for one would not have been happy if that happened to me at a show, but the audience members he screamed at were either too embarrassed or too startled to respond, so they just laughed. And he won!

Wayne Rada is such an accommodating guy. He knew I had to leave early to host the late shows at The Comic Strip so he arranged for me to get photos with the judges and guest stars during the show. As a matter of fact, when Kristen Schaal got off the stage from doing her guest spot, she was kind enough to run out into the hallway so we could get our shots before the next act went on! 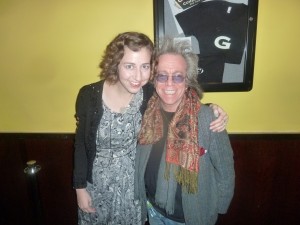 Jeffrey Gurian of Comedy Matters TV with Kristen Schaal at the finals of the Andy Kaufman Awards! She is such a doll!

Wayne also books CB’s Comedy Club, a great little club downtown on MacDougal Street, with an amazing Italian restaurant attached to it, also owned by the fabulous CB. Check it out and tell Wayne and CB that I sent you!