Posted by Jeffrey Gurian on September 5, 2011

Anthony Jeselnik came across my comedy radar a while ago, and I was a fan right away. Something about his demeanor, his delivery and the cleverness of his lines, however dark, makes him stand out amongst the others. I always enjoy seeing him perform and I run into him quite often at The Comic Strip! 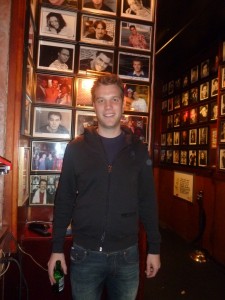 Anthony Jeselnik at The Comic Strip!

It was exciting to see him make his debut at The Donald Trump Roast on Comedy Central, and I interviewed him on the red carpet. He’s had his own half hour special on Comedy Central and has appeared on Late Night With Jimmy Fallon, Jimmy Kimmel Live, Late Night With Conan O’Brien, Last Call With Carson Daly, and was voted by Variety as one of their 10 Top Comics To Watch up in Montreal at the Just For Laughs Festival. That may have been where we first met. The video below is of the red carpet at the Donald Trump Roast, with Anthony, Lisa Lampanelli, Amy Schumer, Doug Herzog, Ice-T and many more!

Comedy Central featured him on their “Hotlist” as one of the hottest comics of the year in 2009, and his first album “Shakespeare” was voted Comedy Album Of The Year by Punchline Magazine. I see Anthony a lot at The Comic Strip!

Check out the video interview with Anthony and Amy Schumer at this year’s Just For Laughs Festival in Montreal!