Robert Kelly’s "You Know What Dude"???

I had a real treat last night. My friends from The Syndicate, and Laugh Button, Matt Kleinschmidt, Chris Elles, and Tracey Zucatti invited me to their client Robert Kelly’s podcast called “You Know What Dude?” at Gotham Comedy Club. I had even a better time than I expected. 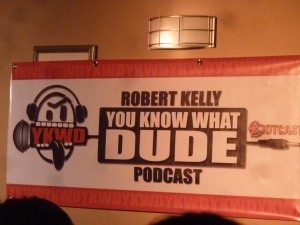 “You Know What Dude” Poster at Gotham Comedy Club!

I first met Robert when he was doing HBO’s Tourgasm with Dane Cook, Gary Gulman, and Jay Davis, and thought he was very funny from the gitgo. 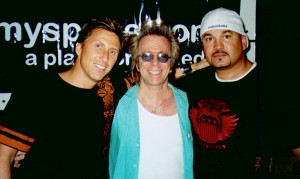 Jay Davis, Jeffrey Gurian from Comedy Matters TV, and Robert Kelly back in 2006!

Not only did they have mics set up at a table for the podcast, they had a standing mic on the stage of Gotham’s Vintage Lounge, so people could also get up and do some stand-up first which I think is a great idea, mixing the two. Let people hear some jokes first and then the comic joins the panel. 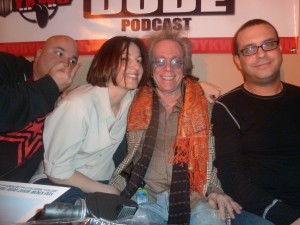 The room was packed to over-capacity, (just an exaggeration in case the fire department is reading this blog post! LOL), and I wound up sitting next to Conan Smith from Denis Leary’s Apostle Entertainment, who works with both Robert Kelly and Joe DeRosa. The two of us were laughing our asses off!

Funny guy Joe DeRosa, who I happen to like very much for his distinctive delivery and sharp material opened the show and talked a lot about the age-old conundrum of whether a straight guy like himself, would rather have sex with a gorgeous female transexual who still had her male organs down below, or a female transexual, who became a bald, muscular tattooed male, but still had his female organs intact down below. 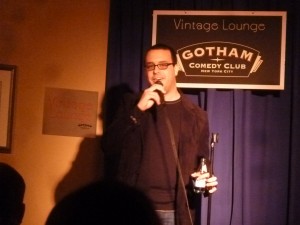 Joe DeRosa doing what he does best, … making people laugh!

I think the gorgeous female transexual was named Billy Jaye and DeRosa proclaimed that he “would happily skip into a fire to blow Billy Jaye.” That kind of solved that problem, at least for Joe, if not for the rest of the audience! (LOL)

Bonnie McFarlane is not only a funny comic but a very empowered woman. She always winds up in “pissing” contests, (not literally! LOL) with male comics who feel the need to try and “reign her in” comedically in some way. ( No pun attached to the fact that her daughter’s name is Reina. mostly cause I couldn’t think of a joke!) 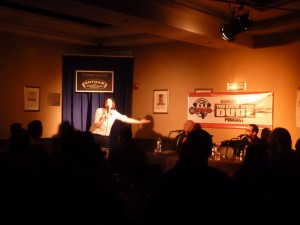 Bonnie McFarlane giving it back to Robert Kelly and Joe DeRosa who are definitely enjoying it!

To Bonnie’s credit she is NEVER intimidated, but instead goes on the attack and not only holds her own, but often comes out on top, which is exactly where I picture her when she’s with her husband Rich Vos! (LOL)

You gotta be a strong powerful woman to be married to Vos! And you gotta be able to take it when it’s dished out, as it often is when she co-judges The Lottery Show at The Comic Strip.

So when the guys accused Bonnie of self-sabotage, she struck back at Kelly by saying,” Bald people love to rape. It’s the same hormone that makes your hair fall out!” She followed that up with, ” If I was getting raped by a bald guy, I’d try a lot harder to get away, than if I was getting raped by a guy with hair!” You gotta be very hip to pull of a line like that, and she totally did!

What made the show even funnier was when Bob DiBuono came out and did Rich Vos! ( Not “did” him in the Biblical sense! Vos was in Florida, supposedly performing! LOL ) He did the best impression of Rich Vos that I ever heard. I closed my eyes and could actually picture Vos in the room. Everyone said he got more laughs than Vos gets doing his own material.

In the photo below, you can actually see a facial resemblance to Vos. When a good impressionist does his best work, he actually appears like the person he’s imitating. I think it has to do with how the speech muscles have to work in order to imitate a voice perfectly, and those muscles probably have something to do with a person’s appearance. 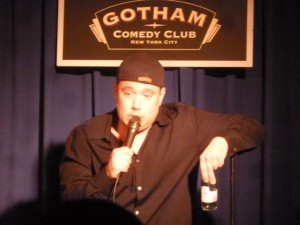 That may explain this photo below when Vos tries his best to smile for a photo! (LOL) 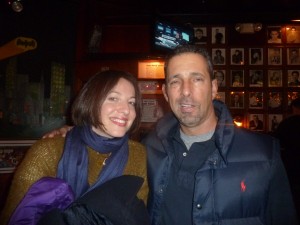 Bonnie McFarlane with her husband Rich Vos who’s doing the best he can to smile! Either that or he’s doing his impression of a man with Bell’s Palsy! (LOL)

The topper on this show was when Robert noticed Wil Sylvince in the room and invited him to join the panel. I was hoping I’d get to hear Wil imitate his Haitian uncle, and anyone who’s ever heard him knows what I mean, ” Why you, why you, why you say dat to me?” (LOLOL) 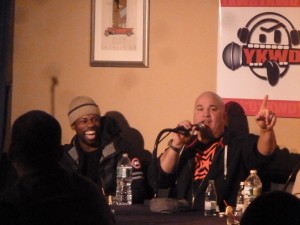 Wil Sylvince having a laugh while doing Robert Kelly’s podcast “You Know What Dude?”

When I co-produced Kevin Hart back in 2010 at Westbury, in a sold out 2800 seat fundraiser for Haiti, along with Tony Rock, Wil was the MC, and the show was phenomenal!

So was “You Know What Dude?”, and at the end people lined up to have their “You Know What Dude” posters signed by the cast, and Kelly wrote, ” Dear Jeffrey, Thanks for all you do for comedy!”, DeRosa wrote ” Jeffrey you rule”, and what Bonnie wrote is just between her and I! (LOLOL)

I can’t wait to see it again, and maybe one day be a guest on it like I was on National Lampoon Radio last week, which should be airing today!

Steve Jobs, the co-founder of Apple finally succumbed in his long-time battle with pancreatic cancer and other health issues. It was announced by Apple late in the day, today, Wed. 10/5/11.

The Apple home page had a black-and-white photo of Jobs with the simple epitaph, “Steve Jobs, 1955-2011.” So simple yet so shocking. Fifty-Six is so young to die. And for a person who changed the world so radically.

He was responsible for both the iPhone and the iPod, and changed technology as we know it forever, but it just goes to show you that no one is immune to the hardships in life, no matter how rich, how successful, how intelligent, or how well respected you are. Jobs was all those things.

So many people think if you’re rich, you have it all. No one is guaranteed good health! Jobs put up a terrific battle, and unfortunately he lost.

During his commencement speech at Stanford in 2005, he actually said, “Remembering that I’ll be dead soon is the most important tool I’ve ever encountered to help me make the big choices in life!”

Our hearts go out to his wife Laurene and his family!

He will be sorely missed, but his legacy will live on forever in the things that he gave us!