I get to interview lots of people but every so often I get to interview someone of whom I’m a genuine fan, which makes it even more exciting. I’ve enjoyed all of Chazz Palminteri’s work, and his new film Mighty Fine really shows off his range as an actor. 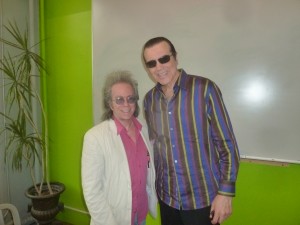 Known for playing tough guys, in this film he plays Joe Fine, a tough Jewish guy from Brooklyn in the “schmatte” trade who relocates his family from Brooklyn to New Orleans in order to be closer to his factory. Every major character in a film needs a fatal flaw, and Joe’s fatal flaw is his unpredictable anger and uncontrollable rage.

An Adopt Films feature, written by writer/producer/director Debbi Goodstein, it’s a semi-autobigraphical drama based loosely on her own Dad, about a father’s love for his wife and two daughters, and how they are affected by his sudden, unexpected bursts of anger and rage.

Joe’s wife is played by the incredibly talented Andie MacDowell, who plays a Holocaust survivor, and I understand that Andie worked very hard to get her Polish accent down pat which she certainly did. It takes a very strong and talented performer to be able to stay in character even for a short sketch, but for a whole film it’s really quite an achievement.

The daughters superbly played by Jodell Ferland, who played Nathalie the youngest daughter, and Rainie Qualley who played Maddie the older daughter were both very endearing and had great chemistry as they had to support each other through the trials and tribulations of living with a father who constantly embarrassed them with his behavior, and probably needed to be medicated, but was living in denial about his problem, and refused to seek help.

Rainie Qualley is actually Andie MacDowell’s daughter. It must be so fun to act in a film with one of your kids!

The story is supposedly told in the voice of Nathalie as a grown woman, which turned out to be the voice of Janeane Garofalo. I knew it sounded somewhat familiar to me!

When Joe Fine did finally give in to his wife’s demand to seek help he wound up charming the psychiatrist into thinking it was all a distortion of his wife’s thinking since she suffered through the Holocaust. Joe refuses to face the fact that his business is on the brink of collapse, and struggles to turn that around with the unwilling, coerced help of his partner well-played by Arthur Nascarella.

When I started this video interview Chazz asked me how long I would like to speak with him so he could guide himself on how long or short to make his answers. I told him I was at his disposal. I would stay for as long as he had things to say. We spent 30 minutes together, and it was an insightful interview into the mind of the Academy Award nominee, who gave us among too many to mention, A Bronx Tale, the Academy Award nominated role of Cheech in Woody Allen’s “Bullets Over Broadway”, and his starring role in “The Usual Suspects.”

If you’re a Chazz Palminteri fan, and who isn’t, … I think you’ll really enjoy this!