Lest my title sound a tad dramatic, let me explain! In a day when the NY Post, ( Monday March 26th, 2012, p. 5) runs a story about political correctness running wild in our city schools, which have banned mentioning references to seemingly harmless words like “wealth” “dinosaurs”, “birthdays”, and even “Halloween”, on city-issued tests, you have to be grateful that there’s someone like Lisa Lampanelli who has the courage to challenge this type of B.S. 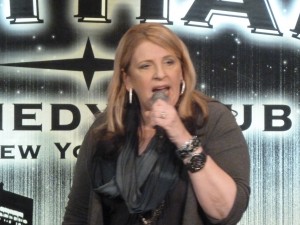 They refer to it as “economic sensitivities.” This kind of so-called “correctness” sounded like a joke when they first started, and can be great fodder for comedians, but it affects our lives greatly. And NOT in a positive way!

Soon everyone will be absolutely silent. No one will be able to speak at all for fear of offending someone in some way, or possibly bringing some uncomfortable thought to mind! As long as you don’t dare offend criminals or terrorists. That is a high priority, because most criminals and terrorists are very sensitive people, and could be easily hurt by the wrong word or phrase!

One of the beautiful things about comedy is that it has the power to bring people together. People laughing at themselves first, allows them to be able to laugh at each other. It’s all in good fun. Lisa has made even the “C” word acceptable, and I’ve heard her use it to refer to her own mother, … while her mother was present! Lisa not only talks the talk she walks the walk! 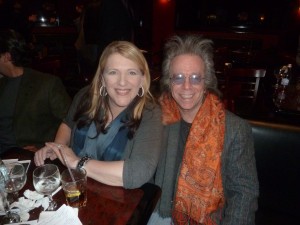 Political correctness is killing us. It divides us and makes us hyper-sensitive to almost anything people say. There’s a great saying I once read somewhere, (and I wish I remembered where! LOL) that states, “Your ego always wants you to be offended. It actually demands that you’re offended. And when you live your life that way, you’re at the mercy of every stranger that crosses your path!”

You give every person the power over you to make you feel insulted or uncomfortable. That’s too much power to give away. People can tell when something is meant as a joke or comes from hate. All you have to do is see Lisa to know that she comes from a good place. She makes fun of herself as much as she makes fun of anyone else. So when she calls an Asian guy “Ching-Ping”, or every Spanish guy “Hector”, or makes fun of the gays, who she raises money for constantly, and who love her, the audience howls with laughter because she does it with love. She comes from a good place.

We need more like her, not necessarily that everyone has to use the “C” word, but she makes people laugh at themselves and not take things so seriously. No one of us chose our race, or ethnicity, any more than we chose our genetics. It was given to us. You get what you get, and that’s it! With so much hatred in the world, we need to break down the barriers, not create more of them.

Go to any of Russell Peters’ shows and see how multi-cultural his audience is. I call him “The Messiah of Comedy” because he makes every ethnic group laugh at each other and he does it by imitating them perfectly.

When did it become an insult, or racist to imitate an accent? Accents are real. People have them. We hear them. Do we have to make believe that we don’t? Therefore, talented people who can imitate them do. I wish I could. I talk about accents in my act. Especially the Chinese accent, which to me has to be one of the most unusual and non-sexy accents in the world.

You will never hear a woman say, ” When he speaks to me in that Chinese accent, I can’t control myself!” You could live to be a thousand, and you will NEVER hear that!

Anyway, when I heard that Lisa would be making a guest appearance at Gotham Comedy Club in a fundraiser for a Manhattan school P.S. 11, I knew I had to show up. P.S. 11, also known as The William T. Harris School, is a public elementary school located in the heart of Chelsea at 320 West 21st Street, known for it’s diversity. They should probably come to Lisa to make up the test questions! (LOL)

Barry Weintraub was the MC which was a great choice since Barry is one of the best. Wali Collins killed it especially when he went into how Black people name their children. He himself once dated a girl named La-ah, which he was shocked to find out she pronounced Ladasha! 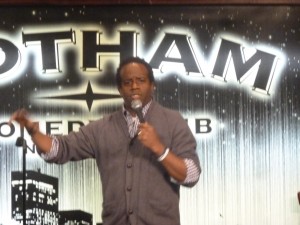 Wali Collins onstage for the benefit for P.S. 11 in Chelsea!

Aside from making appearances all over the country, Lisa is also currently being seen on NBC’s Celebrity Apprentice, where she always tells it like it is, no matter who gets in her face. She claims to have gained 2o pounds on the show, and said she’s a five o’clock shadow away from looking like Chaz Bono! Although I can tell you that Lisa looks more elegant than ever, and I know her a long time! Success does wonders for people!

She kids her husband Jimmy Cannizzaro a lot, but he has a great sense of humor and takes it like a man! She said she flew in for this gig, but couldn’t sit next to Jimmy cause she flies first class! Everyone should fly with Jimmy. You’d definitely feel safe! The man is his own private plane! (LOL)

Lisa is loved on the show as was evidenced by the fact that sitting with her and her husband Jimmy, were Donald Trump Jr. and his wife Vanessa. 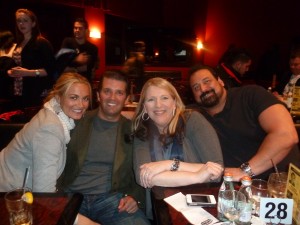 If there was a magazine called “Perfect Gorgeous Couples” they would be on the cover. The two of them absolutely shine, in a very humble unassuming way. I was so glad to see them cause I hadn’t seen them in a while. I first met them when they were engaged, and Vanessa told me they just had their third child 5 months ago. You’d never know it to look at her. Don looked trim and tan, which I guess works well since he’s on TV every week as one of the advisors and boardroom judges on Celebrity Apprentice along with his Dad, and sister Ivanka. Brother Eric also takes part from time to time as a task advisor or boardroom judge. 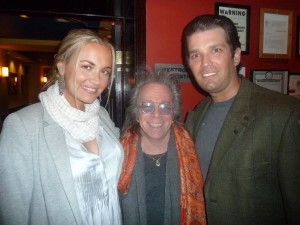 Don also writes a very detailed Blog post on what went on on Celebrity Apprentice called ” In The Boardroom” on the NBC.com website. I’ve been telling him for years he should get into comedy, when I wanted to write his material for the Friars Roast of his Dad, back in 2004, which preceded the Comedy Central Roast. So when I saw him with Lisa I said, ” You see, I told you you’d eventually be involved in the comedy world, … in one way or another!” And we all had a big laugh!

I had met Don Jr. and Vanessa originally when they were Ambassadors for Operation Smile, a fantastic charity that brings plastic surgery for cleft palates and cleft lips to poor children all over the world. Don has been on the Board since 2007. I was a guest at an event they were at, we struck up an acquaintance, and have stayed in touch. I’m happy to say that he reads Comedy Matters and I’m planning to do a video interview with him and Vanessa sometime in the near future.

Comics like to follow a comic who does well, but not too well! How anyone can follow Lisa Lampanelli onstage is a miracle, because Lisa destroyed the audience, but Mike Vecchione managed to do it. He is just so funny and really one of my favorites. I often have to follow him onstage at The Comic Strip, and I say to him, ” Did you have to be THAT funny? Was it really necessary to be THAT funny? How am I supposed to follow that???” 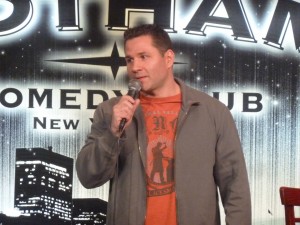 Mike, who says he looks like a nasty Staten Island, racial-profiling kind of cop, ( and he does) talks about his inability to work as an undercover cop. ” Well, if I LOOK like a cop, then chances are I won’t be that effective as an undercover cop.” On being tased : A taser is a weird weapon. Kind of like a mixture of a weapon and an energy drink. When you first get tased, you think you’re gonna get a lot done today, but then it hurts a lot!( Sorry Mike for the para-phrasing! LOL)

Mike’s soft low-key delivery, combined with his fantastic writing is what really makes him special. He will definitely be very big in the business!

In line with Lisa’s type of material he asked the Asian people in the crowd, “Who do you like better, Jeremy Lin, or General Tso? Both are number 17!” That is hysterical! I think it’s funny that his own people can’t say his name. They call him Jelemy Rin!

Most comics try to end on a strong joke. Every time I thought Mike was ready to end, he topped that strong joke with an even stronger joke. He’s really such a great performer, and the nicest guy!

It was an AMAZING show, which raised a lot of money for the school. I had hoped to shoot a little video with Lisa afterwards, but she had to run, so we will definitely do that soon. Jimmy said he’ll be in it too! She also has a one woman show coming up that we have to talk about as well! ( Lisa, Tweet the shit out of this Blog post! LOLOLOL )