Stewart Lane is truly the King of Broadway! He just won his 5th Tony Award for War Horse. It received the Tony for Best Play, but when I last saw him two days before the Tonys at the premiere of the film version of Stephen Sondheim’s “Company” at the NYIT Screening Room on 61st Street and Broadway, he didn’t know that yet. 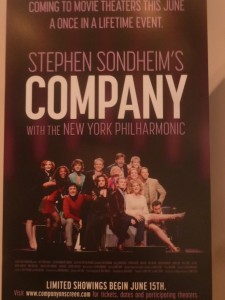 I had seen him a couple of weeks before that at his book party at The Friars Club, where we are both brother Friars,for his new book “Jews on Broadway”, (of which there have been quite a few!) Btw, just in case you were wondering some of the Jews on Broadway were Fanny Brice, Irving Berlin, Barbra Streisand, Jerome Kern, Alan Menken, and Tony Kushner, some of whom you may have heard! (LOL) 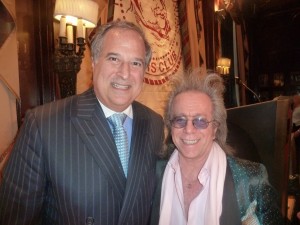 Jeffrey Gurian and Stewart Lane at The Friars Club book party for Stewart's new book, " Jews on Broadway!" Jews are also off-Broadway but that's a topic for Stewart's next book!

It was there at The Friars that I also ran into Broadway Producer Ellen M. Krass, CEO of EMK Productions, and she and Stewart told me about an event they were doing for the premiere of the film version of Stephen Sondheim’s “Company”, which would only be shown four times June 15th, 16th, 19th and 21st. The production was done with the world-renowned New York Philharmonic Orchestra, and starred Neil Patrick Harris who went on to host The Tony’s that Sunday, Patti Lupone, Jon Cryer, Stephen Colbert, Christina Hendricks, Craig Bierko, Martha Plimpton and more. 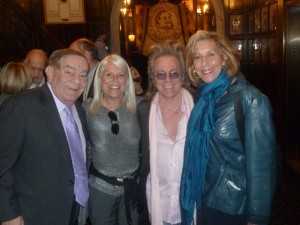 Ellen gave all the credit for the evening to co-producer Lonny Price. She herself is a successful producer of TV, off-Broadway and Broadway, and actually produced the Kathy and Mo Show starring Kathy Najimy, and Mo Gaffney. That show will always stick out in my mind because the one show I ever invested in in my life was a show called “Only Kidding” starring Paul Provenza. That show was in the Westside Arts Theatre on West 43rd Street, and so was Kathy and Mo. Only Kidding was voted the #1 off-Broadway comedy by Tim Zagat, so we thought for sure we had a winner, but instead everyone lost all the money they put into it.

It was very disturbing and a very painful lesson, and wound up costing me a fortune. Not because of what I lost, but because of what I could have gained. Right afterwards, I had the opportunity to invest in a brand new little show called “Blue Man Group.” I went to see it, thought it was very entertaining, three guys in blue doing wild things with rhythym, but the fear of having lost all of my investment in Only Kidding caused me to pass, and needless to say, ( then why am I saying it??? LOL), Blue Man Group is not only still running after 20 years, but I think it’s running world-wide. Maybe not in Mozambique, … but it’s certainly running in most places, and I probably could have made a fortune on it, but I guess everyone has a story like that!

So anyway, the plot of Company follows five couples and their friend Robert (Neil Patrick Harris), the perpetual bachelor, and explores the meaning of relationships through a series of vignettes. Company first won the 1971 Tony Award for Best Musical, and is a classic.

Anyway, at the Company event, I got to speak with Stewart, Ellen and Jon Cryer in the video you’ll see below. Stewart was there with his lovely wife and co-producer Bonnie Comley! 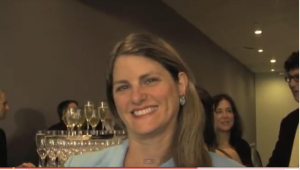 Bonnie Comley is not only Stewart Lane's wife but also a producer in her own right, and as you can see "Comley" is a perfect name for her because Comely means "beautiful"!!!

Jon is as nice as you would expect, maybe even nicer! He had gotten a call from his agent asking if he’d do a benefit for the NY Philharmonic, but he didn’t realize he’d be asked to sing on stage professionally, which he had never done before. He thought it might be something simple, with people holding their scripts and such. After he agreed, he found out it was a fully staged production, to which he said , “EXCUSE ME???”!!! Hear it for yourself in the cool video below! 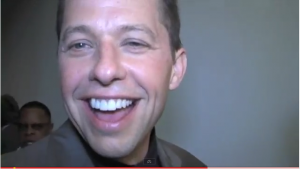 Jon Cryer smiling big while being interviewed by Jeffrey Gurian for Comedy Matters!

I was tempted to ask Jon about my old pal Charlie Sheen and Two and a Half Men, now that Ashton Kutcher has agreed to join the cast, but in my infinite wisdom, I decided against it, and just stuck to Company. Check it out right here!