Louis CK Works Out At The Comic Strip

Posted by Jeffrey Gurian on November 5, 2011

I think it was Chris Rock who said during an interview I did with him for the book on the history of The Comic Strip, … and I’m paraphrasing here,… that a comedy club is to a comic like the gym is to an athlete. You go to a comedy club to work out. That’s where you try out new stuff, … if it’s a “safe room”!

Most comics don’t work out new stuff during a weekend show, because that’s where you bring your “A” game, but The Comic Strip has always been known as a “safe room” to work out stuff during the week. So no one except the audience was surprised to see Louis CK drop by to work out some new material for the special he’s doing on Nov. 10th at The Beacon Theatre in NYC. As a matter of fact, the audience was thrilled! 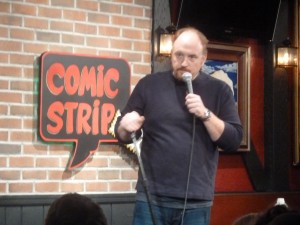 Louis CK working out some new stuff at The Comic Strip!

Louis has two daughters, 6 and 9, and you can tell he’s probably a really great and fun Dad, but he says things that other people just think, but would probably never say out loud. Louis has no fear in saying whatever comes to his mind, and the audience loves it.

He’ll say things like “the hardest thing about having kids is that it’s boring!” And then he proves it!

Or he wondered how he’d break the news to his wife if he took his kids camping and they got eaten by bears. What would that phone call be like, as he had to deliver the gruesome details of the unfortunate incident. As a Dad myself I don’t know if I could tackle that subject comedically, but Louis manages to make it funny!

In talking about the sexual things that go through men’s minds on a constant basis, Louis compares men and women with the genius observation that “women are tourists in sexual perversion, while men are prisoners of it!”

Louis has always been a good friend to The Comic Strip, and to Richie Tienken, and spent some of his early days there. We’re trying to work out a time for him to do the interview for the book. 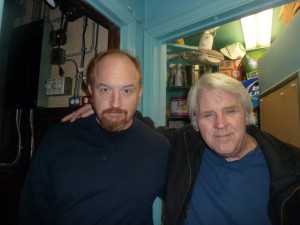 Louis CK backstage at The Comic Strip for a benefit for The Red Cross with owner Richie Tienken!

I saw him win an award at the Comedy Central first Annual Comedy Awards this past year and again in Montreal at the Just For Laughs Festival! 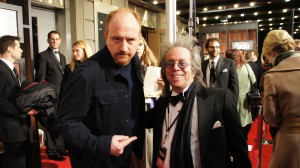 Jeffrey Gurian of Comedy Matters TV with Louis CK on the red carpet of the Comedy Central Comedy Awards!

Make sure you to and see him at The Beacon on November 10th and tell him I sent you!