His face was known all over the world. Even if you didn’t know the name Charles Durning, you recognized his face. He was in more than 100 films, including “Tootsie” with Dustin Hoffman, “The Sting” with Robert Redford, “The Best Little Whorehouse in Texas”, “Dog Day Afternoon” with Al Pacino, and so many more! He was a police chief in “Dick Tracy”, and sold frog legs in “The Muppet Movie”!

He starred on Broadway, and won a Tony for his portrayal of Big Daddy in a 1989 revival of “Cat On A Hot Tin Roof”, and got two Best Supporting Actor Oscar nominations and nine Emmy nominations. He was a beloved character, who in 2008 was honored with a star on the Hollywood Walk of Fame!

I met him years ago at a wrap party out in LA, for a film he did with my friend Scott Baio called “Very Mean Men”, with Matthew Modine, Ben Gazzara, Martin Landau, and Burt Young to name a few of the more recognizable names. It was directed by Tony Vitale, who had just directed a film that I wrote with Scott Baio called “Face to Face”. 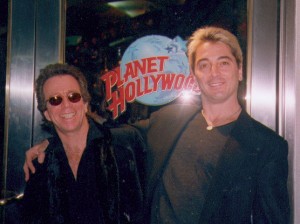 It was a comic drama directed by Ellie Kanner about three young men (Scott Baio as Richie, Thomas Calabro as Philly and Carlo Imperato as Al) who kidnap their emotionally distant fathers, (Dean Stockwell, Alex Rocco, and Joe Viterelli), for a weekend of forced “male bonding.” The movie won the Audience Prize for Best Comedy at the Marco Island Film Festival, the Silver Screen Accolade in the Reno Film Festival and the 10 Degrees Hotter Best Feature Award during the Valley Film Festival. It was also chosen as the opening night film for the Taos New Mexico Talking Picture Festival.

I missed a couple of those because my Dad was terminally ill at the time, and I wanted to be here for him. I made it to Taos though as well as a great festival in Sedona, Arizona. There’s nothing more exciting than having your film shown in a film festival, especially when you’re there with the stars.

I had met so many stars before, but I was really impressed to meet Charles Durning. There was something about him that always drew me to him. I had admired his talent for years and I think he even played W.C. Fields in a movie, and W.C. Fields was my favorite comedian of all time. 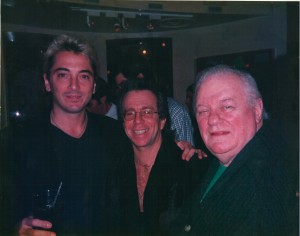 Scot Baio, Jeffrey Gurian, and the great Charles Durning at the wrap party for “Very Mean Men” at Planet Hollywood in LA!

Charles Durning is a talent that will be missed! R.I.P. Charles!

For more on this story and Charles Durning check out Andy Soltis’s story in the NY Post!