I have been a fan of Page 6 in the New York Post for longer than I care to admit.  As far as I’m concerned it’s the most powerful and most influential “gossip page” in the country, and I’ve been honored to be on it maybe a dozen times over the years, if not more. 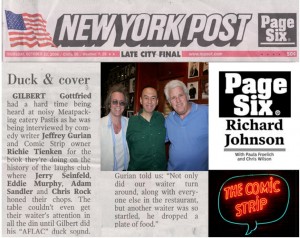 Page 6 with Jeffrey Gurian, Gilbert Gottfried, and Richie Tienken, owner and founder of the legendary comedy club The Comic Strip after Gilbert's interview for the book Jeffrey is writing for the 35th anniversary of the club.

Every day, it’s basically the first thing I read in the NY Post, and very often I know many of the people being written about, so as a new feature of this Vlog, I will be telling some personal anecdotes involving the people written about on Page 6.

Today’s column is headed with a huge story on Camille Grammer, Kelsey Grammer’s ex-wife who supposedly recently settled their divorce for about $50 million bucks.  Camille was one of Bravo’s “Housewives of Beverly Hills” and supposedly the producers of the show are concerned that she’s toning down her act so as not to stir up any trouble between her and Kelsey.

It seems that Kelsey is looking for custody of their kids, and she doesn’t want to give him any ammunition by acting out in any way on the show.  Meanwhile the producers want the cast to be more outrageous for Season 2.

Camille agreed to the divorce settlement about a day before Kelsey was to marry Kayte Walsh, supposedly as an accommodation to him, and she doesn’t want to jeopardize all she’s attained for a reality TV show.

Camille is often portrayed in a negative light, but I know her for many years, since we were both kids, and she’s a sweetheart, with a heart of gold! (LOL) 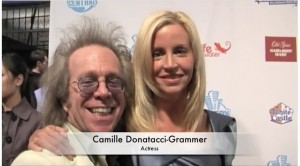 Jeffrey Gurian with his dear friend Camille Grammer on the red carpet of the Comedy Central Night of Too Many Stars!

When I first met Camille, it was before her Playboy days.  Her name was Camille Donatacci, and I cast her in two little comedy films that I wrote and co-produced, that just happened to be for Playboy TV.

Frank Chindamo Pres. and CEO of a company called “Fun Little Movies” which is now world known for creating video content for mobile phones, was in those days producing short films.  He came to me to create a series of short “futuristic” films for Playboy TV, and I got famous comics like Richard Belzer, Pat Cooper, and Gilbert Gottfried to star in them, which they did strictly as a favor to me.

Camille was in two of them.  In the one with Richard Belzer, called “The Bar Channel”, Belzer is at home watching “the bar channel”, where guys can scan girls from their homes.  ( remember this was futuristic, before the days of Skype, and videophones.)

So in the script, guys watch this channel at home, scan for hot girls, and then try and pick up girls via TV’s that are placed on the bar.  Phoebe Legere also starred in this one, and Belzer comes on the screen and offers her a drink.

She accepts and with that, another guy pops up on another screen and tries to muscle in on the first guy’s thing by belittling him.

Both guys are played by Belzer.  An argument breaks out between them, and a bouncer comes and throws both TV’s out of the bar.  Camille played a patron about whom Belzer says, ” That chick’s so hot she could set off the friggin’ sprinkler system.”

In the second film with Gilbert Gottfried called ” Seeing Is Believing”, Gilbert is in a club trying to pick up girls wearing glasses that can only be described as being kind of like microscopes.  He has to focus his lenses by hand.  His pick-up lines are the worst!  ” Would you like to see some pictures of my furniture?”

Needless to say he meets no one.  His friend tells him that maybe he needs to get new glasses, and for a few extra bucks he can get them with X-ray vision.  Gilbert thinks that means he can see through girls clothing.  He goes to the eye doctor and Camille is the sexy nurse.

Gilbert envisions seeing through her clothing, but after the surgery when the doctor gives him a remote control box to turn on the X-ray vision, he looks at Camille, presses the button, excitedly expecting to see her naked, but instead he sees her skeleton, and goes into seizures.

On the shoot, Camille looked gorgeous and every guy wanted to be with her, but she wouldn’t give anyone any play, hence instead of calling her Camille Donatacci, she got the nickname Camille “Don’t Touch Me.”  We all knew she’d wind up with someone famous and successful and she certainly did. 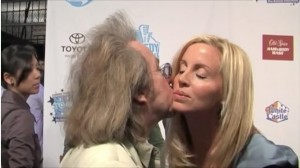 Despite how they often portray her, she’s a great girl, with a good heart, and I wish her all the best!