It’s a long-standing tradition that once a year The Friars Club raises money for charity by “Roasting” a huge star, where a couple of thousand people show up in the Grand Ballroom of The Hilton Hotel to hear other big stars say filthy things about the honoree. It’s been going on since 1950 when they Roasted Sam Levenson! Most of you will have absolutely no idea who that even was! (LOL) 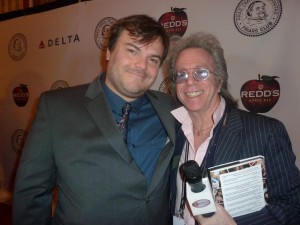 Jeffrey Gurian of Comedy Matters TV with Friars Roastee Jack Black on the red carpet at the Hilton Hotel in NYC!

This year it was the multi-talented Jack Black star of stage and screen, who besides being an actor is also a producer, comedian, voice over artist, writer and musician. He’s best known for his film roles in High Fidelity, School of Rock, King Kong, Nacho Libre, Tropic Thunder, Bernie and Kung Fu Panda 1 and 2. He told me he’s working on Kung Fu Panda #3, which you can hear for yourself in the video right here:

He’s also a rock star with his comedy rock group Tenacious D which he formed back in 1991 with his friend Kyle Gass. 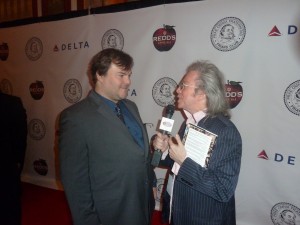 Jack Black on the red carpet of the Friars Roast in his honor being interviewed by Jeffrey Gurian of Comedy Matters TV! 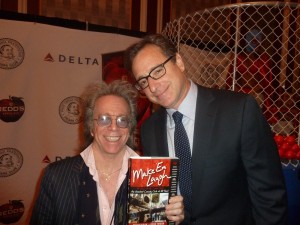 Bob Saget with Jeffrey Gurian of Comedy Matters TV holding Jeffrey’s new book ” Make ‘Em Laugh” , for which Bob gave him a blurb that reads, “No matter how many years pass, I can never say “No” to Jeff Gurian. Hence this quote on his book’s back cover!”

Bob gave me the nicest blurb for the back of my recent book “Make ‘Em Laugh” when he wrote “No matter how many years pass I can never say “No” to Jeff Gurian! Hence this quote on his book’s back cover!”

I was shooting video interviews on the red carpet and besides speaking with Jack and Bob, I also got some very cool interviews with Artie Lange, Amy Schumer, Gene Simmons of Kiss and his Family Jewels, The Beach Boys who I got to thank for saving my life in high school, Padma Lakshmi and more!

Gene Simmons was there with his wife Shannon Tweed and his son Nick, who’s really handsome and about 6’5″ at the very least! Gene is 6’2″ and Nick towered over him. When I told Gene that he was with his Family Jewels, Shannon corrected me and told me that Sophie wasn’t able to come and join them!

Amy Schumer and I talked a lot about her new show debuting very soon on Comedy Central called “Inside Amy Schumer” and about all the guest stars who have agreed to be on with her! She was very humbly amazed that they all said “Yes” to appearing!

I will be posting the video interviews as soon as I edit them! Stay tuned and please “Subscribe” to my Comedy Matters TV channel at http://www.youtube.com/guriannewsnetwork

Thanks and hope to see you soon at something fun!