One of the perks of doing what I do is that I get to see films before they come out, and often get to interview the stars. Yesterday I was lucky to see the new Weinstein Company film “Dirty Girl”, opening in theatres October 7th, starring two newcomers who won’t be newcomers for long. 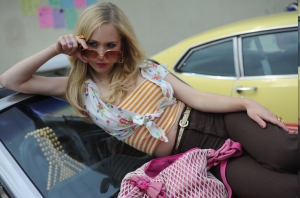 The lovely and talented Juno Temple as Danielle in the Weinstein Company’s Dirty Girl!

As seen on today’s Page 6 in the New York Post, the “Dirty Girl” is played by Juno Temple an English actress, who does a fantastic job, as well as a fantastic American accent in this film. She actually has seven more films waiting to be released. This girl is going to be a big star! Weinstein Company seems to have good “star-radar”, and in this film they’re right on the money!

Juno plays Danielle, a very promiscuous high school teenager, “the dirty girl” of Norman High,in Norman, Oklahoma, circa 1987. She’s like the proverbial “hooker with a heart of gold”, who carries an underlying sadness due to the fact that she never knew her Dad. She didn’t even know his name! 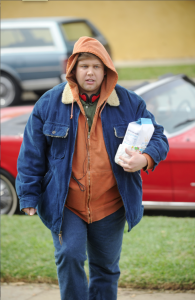 When her overtly sexual, rebellious behavior lands her in a remedial class with a bunch of other “losers”, she reluctantly becomes friends with Clarke,( Jeremy Dozier, in his first major role), an over-weight closeted gay kid, who is also leading a sad, lonely existence. He is constantly abused by his father, Joseph, played by Dwight Yoakam, who is horrified that he’s gay, and not protected at all by his mother, a quiet, mousey woman, played perfectly by Mary Steenburgen! 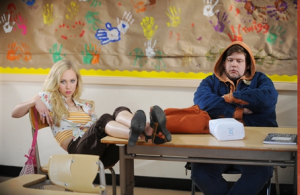 Danielle and Clarke each rebelling in their own way in class in the new sure-to-be Weinstein hit “Dirty Girl”! 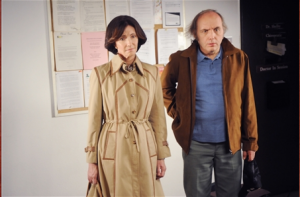 When the teacher pairs them up for an assignment, the two loners, lonely for different reasons, become unlikely friends. They wind up in an exciting road trip to find her birth father, Danny, who she never knew, and which is a source of great pain to her.

Danny is played by Tim McGraw, who gave a heartfelt performance as a guy who suddenly and shockingly finds out he has a grown daughter, in front of his wife and his own little daughter. The scene where Danielle sees him being affectionate to his little girl, knowing she was wishing her entire life for just one moment like that, was so powerful, it brought tears to my eyes. Having had two little girls of my own, I know what that means!

After yet one more abusive incident, Clarke steals his father’s car, and he and Danielle take off for California together, in the kind of touching, heart-felt alliance that only two desperate “misfits” could have. They are determined to track down the guy who impregnated her mother, and who it turns out never even knew she was born.

Danielle’s Mom, Sue-Ann, is played by the equally talented Milla Jovovich. Sue-Ann herself was a “reformed slut” gone straight, set on marrying a straight-laced,no-nonsense Mormon, Ray, who Danielle can’t stand the sight of. And Ray is played by the great, and wonderfully talented Bill Macy. 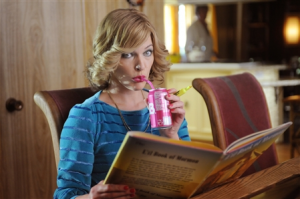 This film was cast so well. Each person was just perfect in their part. I find many things interesting about this film. First of all, that three of it’s stars were stars in other fields besides acting.

Milla Jovovich is a Ukrainian-born supermodel and fashion designer as well as a singer, Dwight Yoakam is a singer-songwriter most famous for his work in country music, who has sold more than 25 million records, and Tim McGraw is also a country-western singer,who has sold more than 40 million albums. I love when people step out of themselves to become yet something else. Some people have a dream, and it’s nice when they pursue it successfully. Even more-so when they have already been successful doing something else!

What I think I like most about this film, is the underlying story of overcoming obstacles in your life. You get what you get, and then it’s up to you to do something with it. The Spiritual approach is that we’re born into the families that we’re born into, to learn lessons we didn’t get a chance to learn in a previous life.

In simpler terms, who didn’t feel like an outcast in high school? There was always an “in-crowd” but it was small and super exclusive, and most of those people lived in fear that they would someday be excluded from it. It’s interesting to see those same people many years later! I have had that experience. Let’s just say that if high school was the best time of your life, I feel very sorry for you!

I read the production notes from writer/director Abe Sylvia, who started out as that overweight closeted kid in Oklahoma and turned into a handsome, accomplished Broadway dancer, and now successful screenwriter. I had to laugh when reading the Producer Statement from Rob Paris of Paris Films. It took five years until this film got made, but in the beginning he didn’t even want to take a meeting with Abe Sylvia. Just the name Abe Sylvia conjured up the vision of two elderly Jewish people ” arguing over sunsets in Boca.” He was fully prepared not to like the script by an unknown writer, whose manager, fortunately for us, would not stop badgering him to read it.

Turns out he finally gave in for the meeting and like so many execs, didn’t bother reading the script until the night before the meeting. Instead of tossing it in the garbage after the first twenty pages as he had expected to do, he found himself ” devouring page after page, … laughing and crying in equal measure as he arrived at the triumphant finish!”

To top it off, he pictured an unstylish, nebbishy guy, and in walked this ” tall, handsome, actor-looking type” who turned out to be Abe Sylvia, and who exuded so much confidence that Paris decided to let him direct right then and there!

According to Paris, it took “five years, four different financiers, twelve different budgets, twenty different actors, and twenty-five disparate locations”, to make this film, which is a lesson to all perspective filmmakers out there, ( including myself! ) to never give up, and to always believe in yourself when you know in your heart you have something special to say!

I was also happy to see that my childhood camp friend, super-star Melissa Manchester wrote and performed some of the music,especially one song “Rainbird” that she wrote with Mary Steenburgen!