Letterman Auditions At The Comic Strip

With Eddie Brill no longer booking Letterman, it’s now being done by group decision. Alex, Ryan, and Kelly from the Letterman show recently came down to The Strip to watch a showcase that included a great line-up of comics. I’m leaving out their last names to protect their anonymity! (LOL) 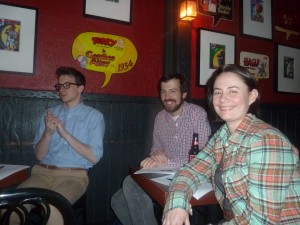 Ryan, Alex and Kelly, the three bookers from Letterman at The Comic Strip!

The MC was Dean Obeidallah, always a favorite and a great MC. Jon Fisch warmed up the crowd as only he can do, and then the procession of ten minute sets started. Every comic did well. First was Mike Burton who opens his eyes so wide, he looked like the photo of my National Lampoon article entitled, “Man Displays Uncanny Ability to Lift Heavy Objects With His Eye.” 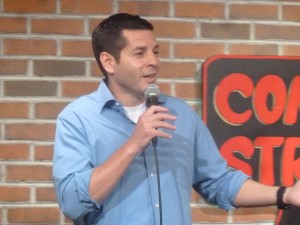 Dean Obeidallah, MC’ing the Letterman auditions at The Comic Strip! 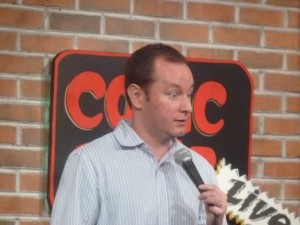 Mike Burton attempting to open his eyes to their maximum capacity for the enjoyment of the crowd!

LeighAnn Lord said flying used to be like a date. You got dinner and a movie. Now it’s more like a one night stand. You slink away with your shoes in your hand, all humiliated, thinking I gotta stop doing this!” 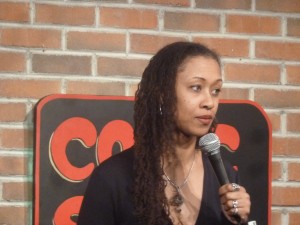 Ross Bennett ends by asking the audience if they mind if he does a joke he used to do in his act and when they agree he says, ” How about that whole Watergate thing?” They love it and so did the Letterman people! 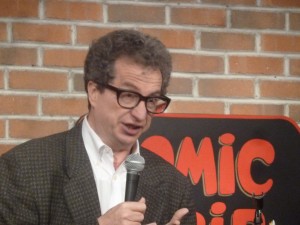 Ross Bennett with a very topical joke on Watergate onstage at The Comic Strip!

Teddy Smith said his mom never had any money even though she worked all day every day. He thought she was a slave! Which is a funny line even if you didn’t know that Teddy was black! 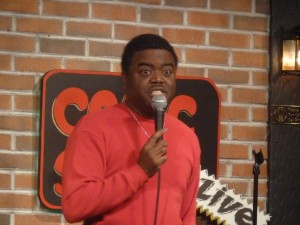 Colin Jost a writer from SNL did a really strong set and was also a favorite of the Letterman folk, and they plan to come back to see Brian Scott McFadden again as well as Mike Vecchione. 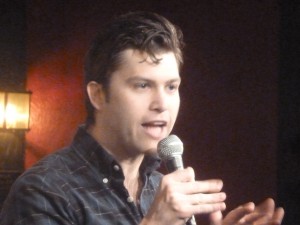 Colin Jost from SNL showing proper mic technique to the Letterman people at The Strip!

The Strip’s own Joe Machi did Fallon last night for the first time and totally killed it! Look out for Joe! He’s very unique and he’s going to do big things!